Home Arts Art Where the Wild Things Are
SHARE
Facebook
Twitter
In art, theater, music, literature, film — basically, any artistic discipline — there are themes, and then there are themes. 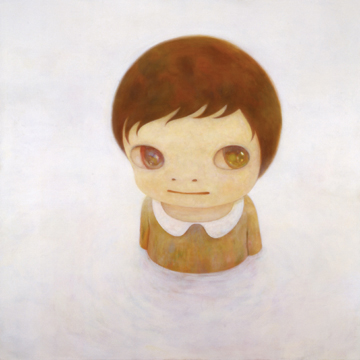 Childhood, like love, death, and nature, is another theme theme, a sprawling jumble of vague sensations and precise, vivid imagery whose complexity has proved to be an inexhaustible source of inspiration for all types of artists.

On view at the Modern Art Museum of Fort Worth until June, Pretty Baby is an ambitious contemporary art exhibit enhanced by a film series, all about childhood identity. Organized by museum curator Andrea Karnes, the show spans the industrialized world, drawing work and ideas from as far away as Tokyo and Amsterdam. (Contemporary art in Third World countries, though exceedingly relevant today, is not only rare but also difficult to acquire.)

Writers and filmmakers have done a good job of creating and destroying and recreating popular notions of the wonder years. Words and moving pictures seem ideally suited to capture the kind of subtle moods that make up the childhood experience and other similarly nebulous states of being. Nabokov’s Lolita, Lewis Carroll’s Alice’s Adventures in Wonderland, and the film from which the exhibit takes its name, a 1978 drama that starred a prepubescent Brooke Shields as a prostitute, have done what few childhood-related paintings have been able to: affect the mainstream.

But visual art, and instrumental music, function differently. As constructs of pure metaphor, they cannot make declarations or define boundaries — or commit felonious crimes — only offer suggestions. The rest is up to you.

Yet even though the rambling meta-narrative that is childhood doesn’t lend itself to visual analysis, many painters and sculptors still pursue it as a viable subject. Some, including a few of the participants in Pretty Baby, do it quite successfully.

The most winning pieces here could stand on their own, apart from the show and its persistent contextualizing. Margaret Meehan’s small, grotesque porcelain heads don’t say anything explicit about childhood identity. (Some don’t have mouths — or have two sets of eyes.) Their carnivalesque anti-beauty is repulsive yet somehow alluring. Japanese legend Yoshitomo Nara’s cartoonish, minimalist depictions of bulbous Japanese girls are more than simply cute. Gently glowing beneath the surface of his planes of organic browns and greens are spheres of primary colors. Nara’s orbs, like luminous aquatic creatures right beneath the surface of the sea, are visible only up close.

Only one artist’s work is delightfully crude and childlike. Makiko Kudo’s flat dreamscapes are muddied and discordant, and often reductive — a patch of blue in one corner is usually counterbalanced by a patch of blue in the opposite corner, and strategically placed bursts of color keep the viewer’s eye moving. But Kudo’s tableaux, like a child prodigy’s chalk drawings, reveal a startling awareness of the unknown, of the power of untrammeled imagination. Most of the figures here, blanched and cavorting in fields or caught in Kodak moments, twist inelegantly into elongated shapes. The background consistently threatens to swallow them completely but never does. The resulting interplay of foreground and background is itself a physical manifestation of the moments between dreaming and waking, adolescence and adulthood, innocence and knowledge.

Just as Sir Paul McCartney believes that we may never have enough of silly love songs, we will always have artwork about themes. And just as no two good love songs are the same, every good thematic art exhibit — about childhood, old age, sexuality, album covers, whatever — is unique. Each is a specific realization of a single curator’s vision. Each is a sort of orchestral composition, but one whose melodies and rhythms derive from representational images and objects rather than musical notes.

Pretty Baby’s art component is a perfectly paced, mischievous symphony for paint, clay, and video. It comes on strong, quiets in the middle — no doubt to foment dramatic tension — and floats off into fantastical reverie at the end.