Jhumpa Lahiri’s excellent novel The Namesake takes much of its inspiration from the 19th-century Russian author Nikolai Gogol. 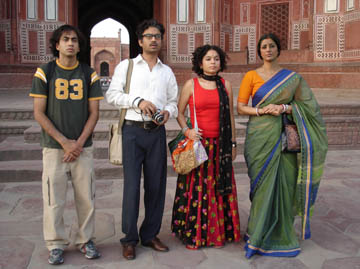 Adapting it to the big screen is Mira Nair, whose sensibility is much more Tolstoy than Gogol; her movies teem with subsidiary characters and often stretch out over decades. She’s as cosmopolitan as any Indian director, but her filmmaking tends to lose its spice when she ventures outside Indian subjects, like in her 2003 literary adaptation Vanity Fair and her 1995 Latino generational saga The Perez Family. (Compare this with Ang Lee’s films, which almost always capture the local flavor whether they’re about Wyoming cowboys or English landed gentry.) The Namesake finds Nair back on more familiar ground, and while I don’t feel it’s a great film as some of my colleagues do, I do find it to be a solid piece of work, one of the best that this ambitious and talented filmmaker has turned out so far.

The movie begins in 1974 in Calcutta, with graduate student Ashoke Ganguli (Irfan Khan) reading a book of Gogol’s stories on a train. Reading is Ashoke’s way of experiencing the world beyond India’s borders, but an older fellow passenger tells him that there’s no substitute for traveling. Soon afterward, the train derails, killing most of the passengers but sparing Ashoke. A few years later, Ashoke brings his new wife Ashima (Tabu) over from India to New York, where he has become an engineering professor. When they have a son, Ashoke names the boy Gogol. In the present day, the fully grown Gogol (Kal Penn) comes to resent his name, which is odd enough even before its unintentionally funny pairing with the surname Ganguli.

Lahiri did not write the screenplay adaptation but turns up in the movie as one of Gogol’s many, many aunts. Nair isn’t quite at home with the story’s big emotional scenes, like the one where Ashoke finally tells his son why he chose the name of Gogol. She’s much better with Lahiri’s small, telling moments, like when a homesick Ashima spends one of her first mornings in New York making herself a snack out of Rice Krispies, red curry powder, salted peanuts, and lemon juice. (I need to try that at home some time.)

Gogol’s struggles with his name reflect his struggles with his identity as an Indian-American. He spends the first part of his adult life fleeing his ethnicity and dating a rich blonde American girlfriend (Jacinda Barrett). Later he runs back to his roots and marries a worldly Indian girl whom his parents would approve of (Zuleikha Robinson). To the credit of both book and movie, neither of these courses makes Gogol happy. Still, as an Asian-American with a somewhat odd first name myself, I can’t help feeling I should have gotten more emotionally invested in this character than I did. Then again, all the Joy Luck Club-style angst over one’s heritage leaves me unmoved — I always found Harold and Kumar Go to White Castle to be a truer picture of how Asians get along in America.

Speaking of which, this movie is lucky to have that movie’s star, Kal Penn. Whether it’s Hollywood typecasting or his own choice, he’s been marooned in substandard stuff lately — Van Wilder: The Rise of Taj, Epic Movie, an uncredited cameo in Deck the Halls. His talent deserves so much better, and though Nair isn’t exactly a funny filmmaker, she can recognize a skilled comic actor when she sees one — remember Vijay Raaz’ wedding planner in Monsoon Wedding? She gives Penn the room he needs to get laughs, especially in a post-wedding scene where he leers lustfully at his new wife doing a striptease for him. Penn delivers the goods dramatically, too — he looks good breaking down in tears after one of his parents dies. It’s gratifying to see him carry a serious picture like this. (Meanwhile, lowbrow Penn fans can take heart: The sequel to Harold and Kumar is in the works.)

All in all, Nair and screenwriter Sooni Taraporevala do a pretty good job of streamlining the book, and they make some valuable additions, most notably a breathtaking interlude when the Ganguli family visits Agra and the Taj Mahal. If you’ve only seen the postcards of this iconic building, the movie shows you that the interiors are almost as beautiful as the outside. They also concoct a painful scene where the American girlfriend meets Gogol’s parents and tries to please them but does all the little things wrong. The movie is made of moments like these, and while they don’t build up to a powerful climax, they’re more than worth watching in themselves. Reportedly Nair turned down an offer to direct the fourth Harry Potter movie in order to film The Namesake. It’s no small matter to say that she probably made the right move.