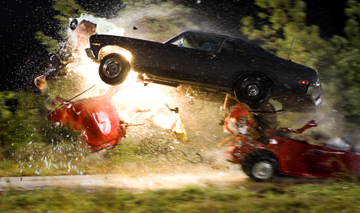 The movie stars Halle Berry as Rowena Price, a New York reporter whose childhood best friend Grace (Nicki Aycox) comes to her with the news that she’s been having a hot and heavy affair with Harrison Hill (Bruce Willis), the head of a gigantic ad agency. Recently tossed aside by the adman, Grace makes noises about going to his wife. When Grace subsequently turns up dead, Ro assumes a fake identity, takes a job as an office temp at Hill’s agency, and dangles her fine self in front of him as bait. I feel obligated to point out that this isn’t how reporters usually work, though Ro’s willingness to cross a few professional lines is made semi-credible by the fact that she’s been professionally thwarted and pissed off (in a completely unbelievable opening segment). Of greater concern: Ro’s supposed to be the best investigative reporter around, yet she never seriously considers Hill’s wife as a suspect, nor does she have any clue about her technogeek colleague (Giovanni Ribisi) who’s nursing a psychopathic crush on her.

Despite this and Berry’s typically amateurish performance, the movie might have done all right had it concentrated on Ro’s entrapment of Hill. Instead, her colleague’s obsession turns out to be part of a needlessly complicated and crazily bad larger story involving Ro’s cheating boyfriend (Gary Dourdan) and her own previous experience of sexual abuse. It’s like it’s not enough for thrillers to simply thrill any more. They need to have a shocking plot twist to blow the audience’s mind, or better yet, blow the mind of one A-list actor so that they’ll agree to star in the thing. While you can appreciate the effort that goes into inventing a development like this, the fact is that the ploy fails more often than not, and when Perfect Stranger collapses in on itself, the wreckage is ugly and hilarious. The wrecking in Grindhouse is another story. Oddly enough, it also features Bruce Willis. The movie is a multi-part homage to penny-ante 1970s thrillers. It’s made up of Robert Rodriguez’ zombie movie “Planet Terror,” Quentin Tarantino’s car-chase movie “Death Proof,” and some funny trailers for fake movies by Eli Roth, Rob Zombie, and Edgar Wright. (I’d actually like to see Zombie’s Werewolf Women of the SS, starring Nicolas Cage.)

Rodriguez’ watchable film nevertheless takes the genre a shade too literally, copying the look and feel of cheap horror flicks but forgetting to put a distinctive spin on those movies, save for the nifty over-the-top touch of Rose McGowan as a go-go dancer whose chewed-off leg is replaced by a machine-gun prosthesis. Far more interesting is Tarantino’s segment, which revolves around Kurt Russell as Stuntman Mike, a psycho killer whose weapon of choice is his car, which has been “death-proofed,” i.e. specially reinforced so that the driver can’t be killed even if he drives the car into a brick wall at 125 mph. After the outrageous eye candy offered up by the Kill Bill movies, Tarantino’s latest film is a much less visual project that puts the focus back on his writing. We tend to think of Tarantino as a maker of “guy movies,” but this one’s characters are almost exclusively women. He does a terrific job creating two entire sets of female friends here, profligately introducing one set only to have Stuntman Mike kill them en masse in a single crash restaged four times in quick succession so we can see the carnage done to each individual victim. (Tarantino makes a gruesome case for not dangling your feet out the passenger side window when the car’s moving.)

The conversations among all of these women are flavorful, witty, and distinctively Tarantinoid, though there’s too much teasing about an activity called “ship’s mast,” which turns out to be an insanely stupid car game that looks like quite a bit of fun. It’s played by three professionals enjoying a few days off from a Hollywood movie that they’re shooting: a stunt driver (Tracie Thoms), a makeup artist (Rosario Dawson), and Zoe Bell, a New Zealand stuntwoman who portrays herself (she doubled for Uma Thurman in the Kill Bill movies). When Stuntman Mike attacks them, he quickly finds out he’s messed with the wrong women. Terrifically, he turns out to be a big wuss when he’s challenged. The extended car duel between them takes up the whole second half of “Death Proof,” and you’ll be holding your breath the entire time, especially watching Zoe hang on to the hood of her car and wondering how many bumps from Stuntman Mike’s car she can take before falling off. For a three-hour film, it’s good that Grindhouse saves its electrifying best for last.