Home Music Listen Up Oliver Future
SHARE
Facebook
Twitter
Oliver Future maybe may be the hardest-working unsigned band around. They’ve committed themselves to the stage, the road, and the studio as ferociously as groups and performers with 10 times the budget and resources. 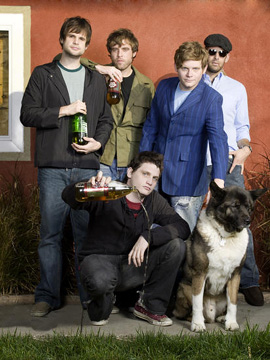 Ollie’s new album, Pax Futura, co-produced by the band members and Adam Lasus (Clap Your Hands Say Yeah), has been a long time coming. After relocating to Los Angeles from Austin about two years ago, and getting twisted up in the industry wringer, the band took the better part of last year to record the full-length at Lasus’ L.A. studio. The result is a mature, seamlessly sequenced, genuinely felt work, and certainly the band’s most original to date. Every song flows gracefully into the next, which makes praising any single track nearly impossible. But there are more than a few standout moments. The gorgeous “Signing Off” hums along giddily, while the album closer, “The Slow Fast,” conjures some ominous, dark overtones. The most accomplished “track,” however, is “Whispery Wintry Wind” / “The Second” / “Horse Slayer Technique,” a triptych that is arranged and pulled off as expertly as the second half of Abbey Road. No kidding.

Indeed, the five guys in Oliver Future have apparently been studying their vinyl record collections. Drummer, percussionist, and sometimes-producer Jordan Richardson, a Fort Worth native, delivers a musical, exploratory performance, simultaneously managing to bash and do his most subtle and intricate stickwork to date. Bassist Jesse Ingalls is primarily responsible for giving every tune not only its pulse and backbone, but also its mood. Guitarist/multi-instrumentalist Sam Raver is the band’s color guy, dripping beautiful patterns across nearly every song, but he’s careful never to overwhelm any of them. And as much as Raver is deliberate and patient, co-vocalist/guitarist Noah Lit is frantic. They complement each other well. Driving the Oliver Future sound is Lit’s younger brother Josh Lit, co-vocalist and multi-instrumentalist, whose outsized charisma is at once energizing and peaceful. Listening to Pax Futura, you may get the sense that Lasus twiddled a lot of knobs. But the skeletons of the songs are strong, and the band’s live shows prove the truth of the old saying: Genius is the fire that lights itself.-Joshua Lowen