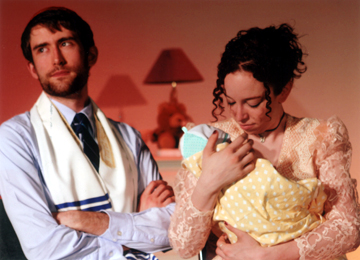 Someone once called live theater “the art of the improbable” because it involves people play-acting on a stage and yet hoping to convince the audience that there is some element of truth in what they’re presenting. Fort Worth’s Pantagleize Theatre Company is finishing its first full season with a staging of Ted Tally’s Little Footsteps, and in that spirit of improbability, they’re doing it in the unlikeliest of places: a converted warehouse space between the Exelon-Handley Power Plant and the Union Pacific Rail Line just off 820.

The show’s playbill lists “our train” as one of the characters and explains that “the actors may find it necessary to pause until she pipes down.” And indeed at a recent performance, the actors had to dawdle or shout in mid-performance as Union Pacific cargo caravans roared through. Theater spaces in town apparently are harder to come by than Alberto Gonzalez supporters, so while Pantagleize is likely grateful for its home, the noise factor may be problematic for everyone but the most hardcore, stage-hound suspenders-of-disbelief.

That noted, Pantagleize Theatre is determined to bring new or lesser-known scripts to the Fort, and playwright-screenwriter Tally’s Little Footsteps is an appropriately off-kilter choice. Tally is best known for adapting The Silence of the Lambs, but his comedies (Hooters) and historical dramas (Terra Nova) have been consistent Off- and Way-Off-Broadway presences for close to three decades now. What’s curious is that Little Footsteps, a bleak comedy about the psychological pressures of new parenthood, may have presaged Tally’s interest in Lambs more than anything he’d written previously: It presents an insistent parade of references to dead and dismembered bodies, oozing and spurting bodily functions, and infanticide, as well as the constant theme of sudden, premature death represented in the form of a lead character’s debilitating panic attacks. Here under the direction of Violet O’Valle, the show is just peculiarly morbid enough to engage even when the actors occasionally misfire.

The setup is Neil Simon territory. Successful thirtysomething married couple Ben (Adam Martin) and Joanie (Maria Hawkins) are repainting their Manhattan dining room as a child’s bedroom for the imminent arrival of their first baby. Various personal and family issues begin to emerge as they discuss new parenthood: the frosty relationship between the Jewish Ben and Joanie’s Episcopalian parents (Laura Scott and Toy Armstrong), which may contain anti-Semitic undertones; Ben’s self-confessed immaturity in the face of simple adult responsibilities; and Joanie’s secret fear that having a child is merely compensation for the artistic career she’s afraid to pursue, among other themes.

But Little Footsteps introduces a startling new emotion into this boilerplate scenario: terror. It is not an exaggeration to say that Ben is flat-out terrified of becoming a father. “Parenthood is the unprepared doing the unthinkable for the ungrateful,” Ben quips. But he insists on telling his wife “dead baby” jokes. He has comic-nightmare scenarios of the child being born deformed because he used to smoke a lot of marijuana. He only half-sarcastically informs his wife in a vicious argument that he would’ve driven her to the abortion clinic at a drop of the word “go.” Unsurprisingly, he has abandoned Joanie by the beginning of the second act, and she starts to become so unraveled that her parents fear she might harm her baby or herself at the baby shower.

Needless to say, classic domestic hilarity does not ensue in Little Footsteps, despite the second-act trappings of farce, like Ben climbing in and out of windows, hiding in cribs, and so on. There’s a disjunction between the show’s aspirations for frivolous lunacy and Martin’s performance as Ben, a turn that is at once too broad and frenetic but also convincing enough to drive home the show’s undercurrent of sheer primordial panic at the idea of reproduction. Ben’s anxiety attacks and fainting spells look more like seizures on Pantegleize’s tiny stage. As for Joanie, nicely grounded by Hawkins, she gives a post-partum speech about struggling to cope with the simultaneous urination, defecation, and vomiting of her newborn that is funny-scary.

Truthfully, Little Footsteps mostly intrigues because it’s so damn weird, but also because it takes an utterly unsentimental, even threatening, view of the overwhelming duties that parenthood confers. The final, ambivalent moment leaves it to audience imagination whether Ben will soldier on as a daddy, but at that point it’s hard to care: We’re half-convinced that compulsive vasectomy and hysterectomy procedures may be the most humane options for these basket cases. — Jimmy Fowler

— the company will end its season by offering the Fort Worth debut of Alice in Wonderland this weekend at Bass Performance Hall. Artistic director Ben Stevenson created the evening-length exploration of Lewis Carroll’s popular story for the Houston ballet in 1992. He used the Joseph Horovitz music, commissioned by London’s Festival Ballet in the 1950s. Most of the book’s familiar characters are here, including Alice, the Mad Hatter, the March Hare, the King and Queen of Hearts, the Cheshire Cat, and the Dodo Bird. The ballet is aimed at children of all ages. To help pull off the fantasy of a young girl’s fall down a rabbit hole and into a land of zany characters, Stevenson came up with the idea of having Alice speak as well as dance, adding an extra challenge for the ballerina. Three dancers will alternate in the title role: Carolyn Judson, Jayme Autrey Griffith, and Victoria Wadsworth, partnered at turns by Andre Silva and Thomas Kilps.

Audience members interested in knowing more about the production and the company are invited to attend a lecture 45 minutes before each curtain time, hosted by company manager Margo McCann on the mezzanine level of Bass Hall. The ballet opens to the public Friday evening, with two performances Saturday, and a matinée Sunday afternoon. Jack Buckhannen will lead the Fort Worth Symphony in the pit. — Leonard Eureka