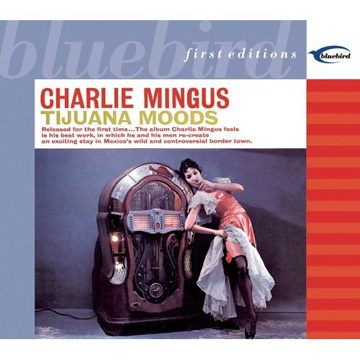 Occasionally, greatness surfaces, such as Tijuana Moods by Charles Mingus and the compilation Just Like a Woman: Nina Simone Sings Classic Songs of the ‘60s. The Mingus, first released in 1962, recounts his trip to the Mexican border town during a tumultuous personal time. The improv-based compositions combine jazz with Mexican influences in what Mingus believed at the time was his greatest work. Filled out by Mingus’ bass and his accompanists’ trumpet, trombone, alto and tenor saxophones, piano, drums, percussion, castanets, and snatches of voice, Tijuana Moods (plus extensive liner notes) is a 35-minute primer on a songwriter’s inspiration. “Dizzy Moods” is a breezy, excited jaunt that Mingus sketched on his way to Mexico. “Ysabel’s Table Dance” blends Mexican influences into the jazz, “Tijuana Gift Shop” captures Mingus’ memories of a tapestry he bought, and “Los Mariachis” wanders the streets with local musicians. “Flamingo,” the only song here that Mingus did not write, is a pensive recollection.

The reissue includes a spoken-word piece, “A Colloquial Dream,” which has nothing to do with Tijuana but is still a good listen. Written by Lonnie Elders, edited by Langston Hughes, and performed by Melvin Stewart, it was included in slightly different form as “Scenes in the City” on A Modern Jazz Symposium of Music and Poetry with Charlie Mingus, released on c.d. in 1994. Simone, on Just Like a Woman, proves (again) that the best covers of other people’s songs are the ones that bring something new to them. She possesses 14 hits from the fertile 1960s: three of Dylan’s (“Just Like a Woman,” “Tom Thumb’s Blues,” and “I Shall Be Released”), plus “I Think It’s Going to Rain Today,” “Suzanne,” “The Pusher,” and more, including one or two that should have died in remainder bins. She also does the traditional “House of the Rising Sun,” a hit for The Animals in the 1960s. The songs become hers because of her unique vision. Personal experience and interpretation are closely connected. These two c.d.’s are near-perfect examples of the creative impulse and the independent spirit.-Tom Geddie