Home Eats Eats Vera Cruz-ing
SHARE
Facebook
Twitter
Nuevo Leon’s owner Roberto Gonzales was born and raised in Monterrey, Mexico, an industrial city in the northeastern part of the country that prides itself on its inland cuisine, from frog legs to chicken parillas. 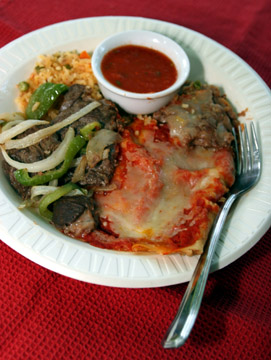 But he must have spent a good deal of time on the Caribbean coast as well, because his restaurant specializes in seafood and handles it wonderfully. A 35-seat, whitewashed hole-in-the-wall with a handful of store-bought Mexican tchotchkes hung on the walls to lend it a little flavor, Nuevo Leon is one of the most unassuming spaces in the city. Though surrounded by Mexican restaurants in the Stockyards, it appears to be holding its own. Groundbreaking is set to begin later this month on an expansion that will up the table count considerably.

And the eatery’s not doing it with Tex-Mex; Nuevo Leon does occasionally tip its hat in that direction but not well. The enchiladas, flautas, and burritos were OK, but nothing you wouldn’t find at a thousand other places in the Fort. No, Nuevo Leon is expanding because after two years, locals and visitors to the Stockyards have discovered that Mr. Gonzales’ joint has some of the best Mexican-style seafood in town. On a recent visit, a mixed lunch special — two flautas stuffed with chicken and cheese, two breaded shrimp, two stuffed jalapeños, and a small portion of ceviche — was all ordinary with the exception of the ceviche, raw white fish “cooked” in lime juice and topped with cilantro. And while it wasn’t world-class, it was surprisingly refreshing, with a bite that had me reaching for a beer to wash it down with — which is just what ceviche is supposed to do.

Even better was a pulpo cocktail: ice-cold pieces of octopus in a slightly sweet chunky sauce of tomato, onion, garlic, green peppers, and cilantro. The guisado was also excellent: succulent pieces of boneless pork that tasted as if they’d been roasted a bit before they were stewed with onions and garlic in a just-a-touch-hot guajillo chile sauce that excellently complemented the generous portion of meat. Like most of the dishes on Nuevo Leon’s menu, the guisado was served with extra-fatty refried beans, with a hint of garlic, that were a cut above ordinary, and a short-grained yellow rice that wasn’t.

Perhaps the best dish of all, which is saying something, was the camarones Mexicana: several large gulf shrimp sautéed perfectly — they spit when you bit into them — and mixed into a gumbo of tomatoes, onions, garlic, and green peppers that was more like rich stew than sauce. Three minor items that were also well done were the guacamole — with jalapeños, cilantro, tomatoes, and onion for a little kick — and the two salsas: a stewed red tomato version with lots of cilantro and garlic, and a hot orange one made with tomatoes and chiles de arbol. If you like heat, this salsa’s for you: It registered about an 8 on the 1-to-10 pepper scale.

If Nuevo Leon’s other seafood dishes, a variety of soups and stews, are as good as the shrimp and pork, Roberto Gonzales and his crew won’t have any problem filling a larger room.