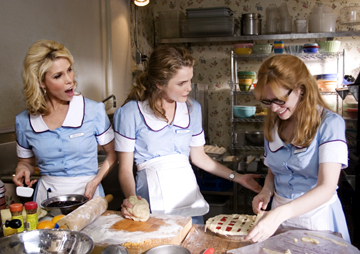 This fetching romantic comedy is by Adrienne Shelly, best known as the petite, flame-haired lead actress from numerous Hal Hartley movies. What’s so sad about this third film of hers as a writer-director is that it also stands as her last — she was murdered last November, at the age of 40, by a construction worker near her New York City apartment. Waitress screened at the Sundance Film Festival two months afterward, and it’s surely no surprise that many film critics succumbed to the very human urge to overrate this work, declaring the movie the greatest thing since sliced bread … uhh, pie. Well, it isn’t, but it’s worth a look all the same.

Keri Russell stars as Jenna, who works as a waitress and baker in a Deep South greasy spoon called the Pie Diner. The movie begins as Jenna discovers that she’s pregnant. She greets this news as a disaster, since her husband Earl (Jeremy Sisto) is a loser who alternately punches her in the face and whines pathetically about how much he needs her, and the pregnancy ends any hope Jenna has of getting away from him. In the moment that she realizes all this, she dreams up a recipe for a smoked ham and Brie quiche. It’s a sign — it takes a little more than an abusive husband and an unwanted pregnancy to keep a baking genius like Jenna down.

Shelly’s writing is undoubtedly the best part of the movie. The one-liners are zingy, the scenes make their point economically and then move on, and foodies will love the attention paid to Jenna’s recipes, which reflect her mood to comical effect. (“Pregnant Miserable Self-Pitying Loser Pie: Lumpy oatmeal with blueberries and fruitcake mashed in. Flambé, of course.”) Particularly well-handled is Jenna’s ill-considered but understandable affair with Dr. Pomatter (Nathan Fillion), her fumbling yet courtly ob/gyn, whom she insists on addressing as “Dr. Pomatter” throughout their entire illicit relationship.

I didn’t watch Felicity, so maybe that explains why the whole Keri Russell thing continues to elude me. She’s certainly pretty, her sense of coming timing is reasonably sharp, and she moves exceptionally well (putting that ballet training to good use). She has done some distinguished work in a few non-romantic film roles to date, as Joan Allen’s angry, driven daughter in The Upside of Anger and the doomed secret agent in Mission: Impossible III. Yet for whatever reason, I don’t see the winsomeness and lovable charm that everybody else sees in her. That holds true here, and her performance lacks the desperation of a woman who is effectively fighting for her life. Without that quality, the story doesn’t have much urgency, and the movie feels more meringue-like than it should.

Then again, Russell may just have fallen victim to the director’s uncertainty of tone. Clearly Shelly’s aiming for something other than indie-movie grit, but the notes of surreal humor don’t fit with the overall warm-and-comfy mood, and they tend to strand the actors, especially in an extended sequence that requires Russell to wear the same stunned facial expression in several different locations, immediately followed by a similar sequence where she’s wearing a dopey smile.

The supporting actors get caught up in this as well, and many of them seem to be acting in completely different movies. The comic business between Jenna and her fellow waitresses (played by Cheryl Hines and Shelly herself) is overdone, and Eddie Jemison is oppressively cartoonish as a dorky bowtie-clad customer with a crush on Shelly’s character. Meanwhile, Andy Griffith plays the diner’s crotchety owner and comes off considerably better than the rest by plowing straight ahead and paying no mind to the foofery around him. Similarly good is Fillion, who has been sadly underappreciated to date — perhaps with this performance will get some name recognition. He dithers a little too much for my taste, but not many actors can play romantic leads and action-hero roles (Serenity) with the same credibility. His lantern jaw and long eyelashes make him well-suited to playing either soft-centered tough guys or the reverse, which is what he does here.

From a story perspective, Waitress is in its own way as canned as any Hollywood drama. Yet its level of craftsmanship is one that a filmmaker could take pride in, and it has the makings of a style that might have crystallized had its writer-director lived. It isn’t a great film, but it’s the work of someone who could have made one. Adrienne Shelly will never get the chance to do it, which is cruel for us and crueler for her. The wistful sense of what might have been gives this movie its unique flavor.