Home Arts Stage Adaptation
SHARE
Facebook
Twitter
There’s an old maxim that, in the food chain that is the so-called Hollywood system, the craft services people rank higher than the screenwriters, and not just because craft services such as on-set caterers actually provide food to the crew. 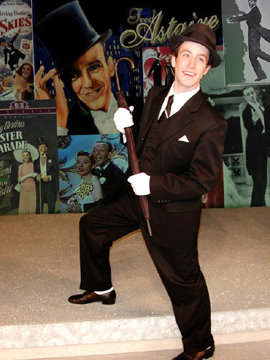 It’s also because film scribes are rarely allowed access to a production site. They make producers (and, to a lesser extent, directors) nervous. The stray original idea might fly out like a flu bug and infect the shoot. The sometimes highly paid, often crushingly underappreciated profession of screenwriter is really just a jumping-off point in Bruce Graham’s caustic comedy According to Goldman, which in Circle Theatre’s current staging offers three of the most finely calibrated, enthralling performances to transpire on one small stage in recent memory. This is one of those rare shows where character and not plot — very little in the way of conventional “dramatic” action happens in the play — provides all of the intense and unexpected twists. The last half of the playwright’s second act is problematic for a couple of reasons, but director Jennifer Engler has coaxed a subtle kind of striptease from her trio of performers: Trey Walpole as a martini-swilling has-been screenwriter, Josh Heard as his humble Christian protégé with a dark core waiting to break out, and Linda Leonard as the has-been’s wife stuck in a purgatory of unexplored ambitions. They flash and then drop one façade after another, until the audience is left with a lingering sense of unease and a little awe at the precision performances they’ve just seen.

Gavin (Walpole) is an East Coast college professor who teaches screenwriting courses mostly because he’s been unable, in his middle-age years, to get his writing career back on track, if it ever was on the rails. His biggest credits are kiddie flicks, like Monkey on the Loose! and the animated Family Dragon series. He spends most of his time flinging acidic remarks at his students and at his lonely wife Melanie (Leonard), an aspiring chef turned homebody who’s dedicated to ignoring her husband’s deep disappointment and who, to let off steam, wanders around campus making small talk with strangers. Into Gavin’s class comes Jeremiah (Heard), a cripplingly shy religious studies major who has spent most of his childhood in a desperately poor South African country with his missionary parents. To escape the monotony and the horrors of poverty and disease, Jeremiah has spent hundreds of hours developing an encyclopedic knowledge of film by watching videotapes of old movies on an electric, generator-powered VCR with a priest in the neighboring village. He’s aching to write a movie, and after a couple of false starts comes up with a DELETE that just might spark Gavin’s re-entry into The Biz — but only if Gavin and Jeremiah can navigate their “creative differences” and Machiavellian hidden agendas.

Circle Theatre has previously staged another Graham creation, Moon Over the Brewery, a show that offered a similar comic cocktail of fantasy and aggression. But According to Goldman is richer in the frustrations and contradictions it builds into the roles. As Jeremiah, Heard gets easily lulled into Fred Astaire song-and-dance numbers, though he twitches atop a mound of violent resentment toward his father and his childhood. He ultimately wants to use his DELETE to exact a kind of fantasy revenge on his perceived real-life victimizers. Gavin claims to despise the “Bruce Willis crap” of much popular cinema and declares that he can teach his pupils to write “a good DELETE, or a DELETE that sells.” He’s clearly interested in the latter now that he’s found a screenplay based on a missionary kid’s exotic African experiences. He wants to insert just enough of that “Bruce Willis crap” to tart up the story and inspire a bidding war. Melanie is sapped from her efforts at trying to coax her husband into accepting his new — and, to her, stable and satisfying — life as a college professor, and she’s more than a little bitter about the roads she never took.

Director Engler does a smash-up job of weaving different scenes, times, and locations into one another without confusing the audience and diluting the impact of this triangle of clashing wills. The show flows like quicksilver. Because According to Goldman is introduced and framed by Gavin’s screenwriting courses, though, it’s hard to forget ideas like structure and credibility, and there are two significant distractions near the play’s finale. Spoiler alert: You can practically hear the wheels of Walpole’s full-throttle performance come to a screeching stop as Gavin, for the sake of a tidy resolution, accepts domesticity with a jarring abruptness. Heard’s diminutive stature belies his dynamic and versatile onstage presence, but his character’s victory with his original blood-soaked DELETE rings clamorously false after Columbine and, of course, the recent Virginia Tech massacre. Those problems are harmful but hardly fatal, because Circle’s interpretation of According to Goldman is so spontaneous and gracefully serpentine in its rhythms. If theater is to fulfill its promise, an audience must share the same roomful of oxygen with actors while waiting with occasional breathlessness to see what those performers will say or do next. Goldman offers that kind of authentic, intimate exchange.