The guy at my front door wanted to make me a salad. It wasn’t actually my front door — it was the front door of a house belonging to a friend of mine for whom I was house-sitting, a brand spanking new cookie-cutter … uh, home … in a Grand Prairie neighborhood just east of Mansfield High School. 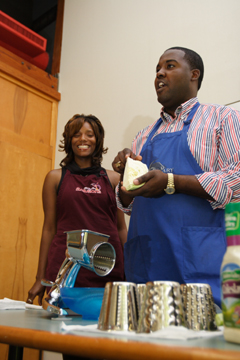 There are lots of explanations: I hadn’t had my morning coffee. I was up too early, thanks to the fact that my friend’s house was so new he hadn’t yet hung curtains or blinds to keep the sun out. I was in my bathrobe, which probably lowered my resistance. And hey, what did I know — maybe in suburbia guys show up every morning to chop some veggies. I must have mumbled something in the affirmative when they asked to come in. Because the next thing I knew, there were two friendly guys, a bag of vegetables, and a shiny metallic gizmo in my friend’s kitchen. What happened next was perhaps the most amazing food-related experience I’ve ever had. No, really — it was inspired. On the other hand, maybe you had to be there (which can be arranged). We engaged in some small talk before they launched into their highly rehearsed spiel, exalting the virtues of salad. It was mesmerizing. There I was in a strange, empty house, with two men enthusiastically tossing my salad.

One man fed vegetables into the top of the shiny metal contraption that, as I learned, is a Saladmaster machine and cranked a handle that caused a cone-shaped attachment to rotate. The machine spat out perfectly, thinly sliced carrots, tomatoes, cucumbers, and countless other fresh veggies into a stainless steel bowl. The other man was fluffing pre-cut field greens and adding the vinaigrette that I had chosen. In a matter of minutes, the pair had produced an awesome salad. The vegetables were perfectly blended into the lettuce, the dressing glistened, and the croutons, which I hadn’t even noticed, had been snuck on top looking firm and crunchy. It was nothing fancy, no exotic cheeses or fruits, just a good, hardy, healthy-looking salad. My first bite was a little awkward. The two men had already taken “I told you so” postures, arms folded, just watching me eat. I hadn’t had any regular breakfast yet, and the tangy vinaigrette didn’t pair well with my morning cup of joe.

But as I forged ahead, each bite became progressively more delicious. Maybe it was the crunch of the cabbage, or the explosive freshness of the tomatoes, or it could have been the fact that I hadn’t been awake for that long, but the awkwardness of the whole experience dissolved into a type of euphoric, meditative experience for which I had no previous point of reference. Realizing they had me at their mercy, the two saladmasters (the people, not the machine) began to launch into their health shtick again. It was then that I finally realized that this encounter was no accident. The veggie dicers hadn’t just shown up on my doorstep because they sensed that there was someone out there — me — who really needed a salad. They were salesmen — door-to-door salad-sellers. So where did they come from, if not from the local Shaolin temple, as I had imagined? Well, turns out that Saladmasters have been out there choppin’ and whoppin’ for 60 years, the groovy modern look of their machine notwithstanding – they and their veggies had just never found me at home before. Saladmaster sells salad-making equipment made of surgical steel, ranging in price from $2,000 to $10,000 for a cookware set, and hosts free dinner parties for groups.

The company’s local headquarters is in Arlington, and their Metroplex showroom is in Bedford. Saladmaster franchise owners Jeremiah and Marguritte Johnson — the first African-American couple to own a franchise in the company’s history — offer free group demonstrations and dinners for up to eight people. Their company, Cooking for the Stars, also offers cooking classes and personal chef services, which cost anywhere from $30 on up for four people. Perhaps the most amazing part of the whole experience was the way the greens gurus left. No high-pressure sales pitch, no “What’s it going to take to get you into a Saladmaster today?” type stuff. They just cleaned up their mess, left a brochure, and told me that I was welcome to invite friends over for a full-fledged salad soiree. Their parting words weren’t “this offer won’t last long.” They were “If you don’t take care of your health, you’ll lose it.” Very wise, Saladmaster. Very wise, indeed.

Drink the Kool-Aid at Shake Shack