Home Film Film Reviews C’est délicieux, ce film
SHARE
Facebook
Twitter
I keep worrying about Pixar. I worry that they now put out a movie every year instead of once every two or three years, and that the studio’s top creative guys now oversee the whole Disney shebangapalooza instead of just their own movies. 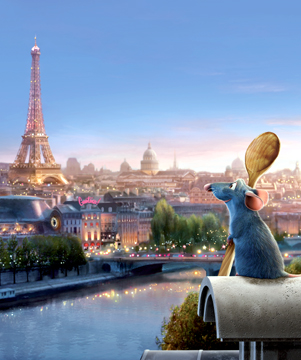 I worry because I remember those animated Disney musicals in the late ’80s and early ’90s, and how those vibrant films eventually turned flabby and repeated themselves when the studio churned out too many of them. Fortunately, Pixar’s latest film, Ratatouille, confirms that it isn’t happening yet. The story begins in the French countryside with a rat named Rémy (voiced by comedian Patton Oswalt). Inside this rat beats the soul of a hard-core foodie, and while his fellow rodents are content to eat out of the garbage, Rémy is overjoyed to find a piece of tomme de chèvre de pays — goat cheese, to you and me — and decides to toast it with a wild mushroom, rosemary, and sweetgrass. (How he accomplishes it is electrifyingly funny.) It’s while he’s searching for some saffron to top that off that he gets separated from his colony and flushed down a sewer until he’s underneath the city of Paris. Rémy realizes where he is when he climbs to a rooftop and views the city’s skyline, in a shot that’s beautiful enough to bring tears to your eyes and make you forget that what you’re seeing is all generated by binary code. Writer-director Brad Bird could be excused for lingering on an image like this, but instead he’s off executing the most intricate plot in any Pixar film yet. Rémy finds his way to the kitchen of the restaurant that bears the name of his recently deceased culinary hero, Chef Auguste Gusteau (voiced by Brad Garrett).

There, he manages to communicate with the restaurant’s newly hired garbage boy and janitor Alfredo (voiced by Pixar animation artist Lou Romano), and in exchange for saving Alfredo’s job, the rat gets to live out his dreams of being a chef. Alfredo’s last name is Linguini, and while the thematically resonant names worked for Bird in his last movie (The Incredibles), they’re too obvious here. Tiny distractions like that aside, the filmmaker is particularly skilled at creating funny montages, and he does virtuoso work as Alfredo and Rémy learn the inner workings of a high-end restaurant kitchen from a combative cook named Colette (voiced by Janeane Garofalo, whose accent totally fooled me into thinking I was listening to a real French actress, or at least a French-Canadian). Rémy has a hard enough time operating in the kitchen without being seen by the other cooks, but he also has to keep his fellow rats away from the restaurant, stop the chef (voiced by Ian Holm) from using Gusteau’s name to sell microwave egg rolls and burritos, and resolve a debate between the culinary philosophies of Gusteau and the fearsome food critic Anton Ego (voiced by Peter O’Toole), whose poisonous review is credited with causing the chef’s death.

Some of these are less compelling than others, but the wonder of it all is that you never feel the strain, so naturally do these plotlines unfold. At least they do until near the end. The way Rémy is allowed to have his big night is the first truly unconvincing story development in any Pixar film, and too bad, because otherwise this might have stood as the greatest Pixar movie ever. Still, the movie has the space to recover, and it does in tremendous fashion. When Ego finally arrives at Gusteau’s to dine, Rémy decides to serve him the humble peasant vegetable stew called ratatouille, and the wordless sequence depicting Ego’s reaction to his first bite is both uproarious and wrenchingly correct. The latter also applies to Ego’s subsequent review of his meal, which contains the truest words I’ve ever heard (from a movie, anyway) about what a critic does. This impeccably written passage and a few cracking lines in other places redeems Bird’s occasional tendency to overwrite. What a treat to have O’Toole read those words, too, in his aged but still silky voice — he gives a better performance here than his Oscar-grubbing turn in last year’s Venus. The film arrives at a time when the American middle class is rapidly catching up to the connoisseurs when it comes to food and other consumer goods. Brad Bird and company calibrate Ratatouille to appeal to our nation’s emerging food consciousness, so much so that you wish they’d had more fun with their French characters who think of Yanks as indiscriminate devourers of beer and McDonald’s french fries. Still, they have a great deal of fun elsewhere, and though we pray that overproduction won’t leach the fun out of the next Pixar movies, we know that if it does, we’ll always have Paris.