Home Music Listen Up Waylon Jennings & the Waymore Blues Band
SHARE
Facebook
Twitter
By the time of this January 2000 concert, Waylon Jennings had survived bypass surgery, diabetes, emphysema, severe carpal tunnel syndrome, and a minor stroke that confined him to a wheelchair. 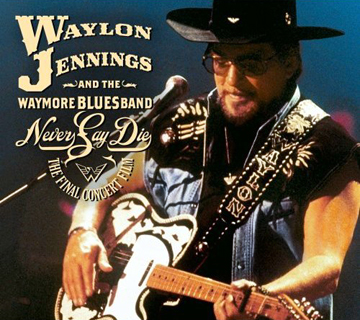 Sitting on a throne — no kidding — on the stage at Nashville’s Ryman Auditorium, one of the definitive country outlaw musicians opens with the defiant “Never Say Die,” with its lines about snow on the mountain, fire down below, no place to hide, no place to go. He died two years later at the age of 64 from diabetes complications. What we are left with is his life’s work: a dozen No. 1 country singles and 14 more top-10 hits, and now Never Say Die, a DVD recording of the concert — his last — plus a two-disc set of 22 songs. The final concert package includes performances by Jessi Colter, John Anderson, Montgomery Gentry, and Travis Tritt. The DVD also includes half an hour of interviews with Waylon, Colter, Bobby Bare, Kris Kristofferson, Willie Nelson, Chet Atkins, and others.

While Jennings’ “outlaw” status was partially a marketing strategy (“Don’t You Think This Outlaw Bit’s Done Got Out of Hand,” he finally sang), he also lived and negotiated hard. He won the first independent production deal in country history, with complete autonomy to deliver his own finished masters to RCA instead of working within the system. One of the most poignant sections of the concert comes from Colter, his wife from 1969 until his death, who begins with the line “I can’t hold a man like you” in the bass-driven, greasy, country-blues “Love’s the Only Chain.” Colter, who mostly gave up her own career to support Jennings’, follows with “I’m Not Lisa” (her biggest hit), “Storms Never Last,” and a duet with Jennings on the Elvis chart “Suspicious Minds.” Here’s a true story involving another outlaw and a child’s first encounter with vacation Bible school a few months after Jennings died: The child, a music fan like his parents, returned home and asked, “If Jesus could come back in three days, why couldn’t Waylon?” A fair question, no?