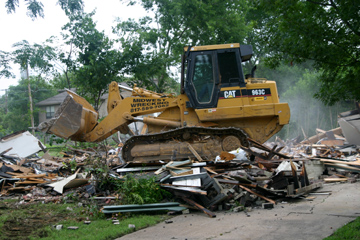 To its left, the neighborhood looks much as it has for years: smaller, mostly well-cared-for homes with big trees, porches, flowers, and shady yards. Look to the right and you see Monticello’s future: four new townhomes — attractive, but twice as tall as the older homes, squeezed into lots with little room left for lawns or trees. Drive down almost any street in Monticello and surrounding Cultural District neighborhoods, and the scene this summer is the same as on West 4th. Smaller homes are being bulldozed and replaced with bigger houses and townhouses — often but not always well-built, well-landscaped additions to the neighborhood that add to the property values. But longtime residents are worried about what is being lost as well, in this Year of the Teardowns.

“In my personal opinion, I’m disturbed by the size and the height and mass and architecture of lot of new construction,” said Bonnie Holmes, treasurer for the Monticello Neighborhood Association. “Some have been designed to fit in nicely with existing style, but a lot of it … a French chateau has no place in Monticello.” Before moving to Fort Worth more than a decade ago, Holmes said, she lived in Houston, in a neighborhood much like Monticello, and her Houston neighborhood had changed completely when she went back to visit. Now she fears, “We’re headed that way.” She’s afraid of losing Monticello’s friendly feel as a place with mature trees, sidewalks, and neighbors who know one another and visit up and down the block.

Redevelopment in the Cultural District began about five years ago, as Fort Worth residents warmed to the idea of living closer to downtown, in more urban settings — the kind of livable inner-city renewal that Fernando Costa, the city’s chief planner, has been pushing for a long time. In the Monticello area, with its many historic homes and high property values, the pace picked up a year ago. Now multiple developers have more than two dozen projects in the works, including townhouses, single-family homes, and apartment complexes. Developers of the 12-acre Museum Place project, to include offices, retail, and residences, have broken ground for buildings on the commercial edge of the neighborhood, at the West 7th-University-Camp Bowie intersection. In the past year, according to the Tarrant Appraisal District, new construction has added about 20 percent to the neighborhood’s property values.

Costa said many central-city neighborhoods are drawing more interest from developers and folks looking for places to live. He sees the change as good for the city, in that such redevelopments allow Fort Worth to grow “smarter,” with higher density areas that are “environmentally sustainable and socially responsible” instead of promoting “inefficient urban sprawl.”
But the planner also acknowledged the dangers of fast change in long-established neighborhoods, especially low-income areas such as Linwood, just east of Monticello. “If we’re not careful, then those kinds of side effects can occur,” he said — including forcing out lower-income families who don’t really want to leave. But the city works with those neighborhoods to preserve their character and to protect them from unwanted redevelopment, he said, by trying to push new projects toward under-utilized areas.

Several developers working in Monticello said they believe their projects are helping revitalize the neighborhood by adding good homes and new amenities within walking distance. Most said they try to involve the neighborhood in their projects in some way. Village Homes, with 19 town homes and three single-family homes, has the most projects in the area. Sales associate Leslie Fry said neighbors are generally happy with the construction and that the developer invites neighbors to meetings before projects start, to answer their questions and “give them a feeling of being involved. We care what they think.”

Fry said most of the houses bought and torn down by Village Homes were not in very good shape and that by buying the land at a premium, the company passes on benefits to sellers and helps increase property values
Builder David Lewis, with “four or five” projects in the neighborhood, also said he bought only dilapidated homes to be torn down — ones he described as rat-infested, wino-occupied eyesores. Monticello residents took issue with that deDELETEion. Holmes said she has seen older and dilapidated homes bulldozed, but she’s also seen “perfectly good houses torn down in the name of ‘I want to build a new house.’” Gloria Bradfield, president of the Monticello neighborhood group, said residents’ reactions to the new construction range from one end of the spectrum to another, but she estimated that about 60 percent of people are against it, and about 40 percent support it.

If new homes require no zoning changes or variances, neighbors may not have much to say about new construction. But they can — and sometimes do — go before city boards to fight requests for changes like smaller setbacks from the street and property lines or the loosening of height restrictions. Costa said the city works to help the neighborhoods “determine what they want to become, whether that means staying the same or changing in appropriate ways.” In one instance, some Monticello residents are opposing a developer’s plans for duplexes on West 4th and 5th streets at the intersection with Haskell Street. At an Aug. 22 meeting of the Fort Worth Planning Commission, they expect to ask that the properties be zoned for single-family residences.

Bradfield said more people need to join their neighborhood associations in order to have a say in what happens.  “If it’s not happening in someone’s backyard or not in front of them, they sort of tend to blow it off,” Holmes added. L.A. Jones of Hamilton Street also has some issues with the builders, particularly Village Homes’ project just behind her house. “My sister has had three flat tires in the past five months,” she said, and a subcontractor backed into Jones’ car, then refused to take responsibility for it. She’s also worried about Village Homes hiring illegal workers, which she said could increase the crime rate. And she doesn’t like the new homes that are going up without porches. Those builders, she said, are “creating hermits.”

Lauren Pointer, marketing associate for Village Homes, said she understands many of the complaints but disagrees with them. She says that, like Museum Place, Village Homes is “trying to bring back the community. “We don’t hire illegal immigrants,” she said. And when residents encounter rude workers or foremen, “We really want to urge people to call us when there’s a problem.” She said that when neighbors have contacted Village Homes in regard to small problems, the company has tried to address them immediately. As for complaints about the problems inherent in construction, she said, “I live on West 4th, and the construction is killing my car.”

Pointer said Village Homes is aware of the effect its homes are having on the neighborhood’s style. “The social and cultural implications our designs have are important to us,” she said, and criticism can help the builder make needed changes. The aim is not to change the area’s style but to improve and complement it, she said. “We’re not going to build a modern house in the middle of a bunch of bungalows.” Builders couldn’t redevelop the area, of course, without owners willing to sell them existing homes and lots. Redevelopment is a boon for people looking to move or people who need to cash in on the greatly increased value of their property. David Breaux, who has lived in the area for more than a decade, is selling his house on West 4th Street so he can move to a downtown loft with less maintenance. He said he’s kept his home in good condition and that prospective buyers have shown a lot of interest.

Many residents understand that change is coming and aren’t fighting every new development. Sheila Grant of the Monticello Neighborhood Association said she shares the sentiment she’s heard many of her neighbors express — she isn’t against change per se, but is for “responsible development.” She understands, she said, that “there’s no happy scenario with construction. Things go on … everyone has to suck it up and deal with it.” She also said she likes the look of some of the new homes. Jones agreed. She said builder Cassius Vessey of Vessey and Sons Construction is “a nice guy, considerate,” who talked with neighbors before starting a project, and builds homes that blend in with the neighborhood’s existing style.

The end result of all the changes could be more new residents like Jordan Dickeson. An exuberant young woman in her 20s, she recently moved with her fiancé into a home they had custom built at West 4th and Haskell. Their reasons for moving into the area are the same that longtime residents have for wanting things to stay as they are. Dickeson said she loves being close to downtown and the neighborhood’s “family atmosphere,” and she has already gotten to know her neighbors.