Home Film Film Reviews You Can’t Do That
SHARE
Facebook
Twitter
Musical stage shows and films established themselves as massively popular forms of entertainment in the first half of the 20th century, but then in the 1960s, the music and the audiences changed. 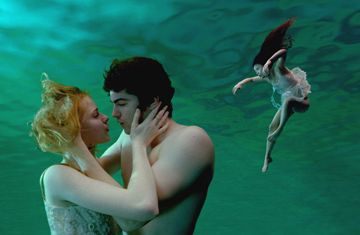 When that happened, most of the people who made musicals either kept making the old-fashioned kind or moved on to other things. However, a few brave souls tried to adapt to the times, and that’s how the strange and short-lived phenomenon of the hippie musical came about. Most examples of this form involved old-school musicians trying to absorb rock-and-roll with varying degrees of success (Hair, Jesus Christ Superstar, On a Clear Day You Can See Forever). Still, it’s no surprise that the hippie musicals that have held up best featured the greatest rock musicians of all, The Beatles.

Across the Universe looks to revive the tradition by using The Fab Four’s songs, but it doesn’t strongly resemble the celebrity satire A Hard Day’s Night or the antic comedy Help! or the acid-trippy Yellow Submarine. Instead, the new movie tries to fit the songs into a generic story set against the protests and social turmoil of the 1960s. Now, there’s nothing wrong with keeping the plot and characters generic if you’re going to hang gorgeous musical numbers on them (see: Moulin Rouge). That task falls to director Julie Taymor, a filmmaker whose wild and lurid visual imagination consistently overruns her discipline and occasionally makes up for her lack of story sense. It’s a pity, then, that this movie isn’t crazier, because its craziest moments are often its best ones.

The film begins with a Liverpool lad named Jude (British TV product Jim Sturgess) who leaves for America, ostensibly to find his long-lost dad but really to escape a life of working at the shipyards. In the States he takes up drawing, befriends a Princeton soon-to-be dropout Max (Joe Anderson), and falls in love with the guy’s sister Lucy (Evan Rachel Wood). The three fall in with a bunch of other New York bohemians whose names reference Beatles lyrics, including an up-and-coming rock singer named Sadie (Dana Fuchs) and her Hendrix-like guitarist Jo-Jo (Martin Luther McCoy). The actors’ musical contributions are competent and fairly anonymous, with the notable exception of Wood, who has a melting soprano voice and an easy way with these songs, from the bubbly “It Won’t Be Long” to the ethereal “Blackbird.” Her screen presence overwhelms Sturgess, attractive singer though he is, and the romance between them never comes close to holding this movie together. As for the film’s political content, Hairspray had a better grasp on the issues of the decade.

All this would matter less if the movie had a few showstoppers up its sleeve. Unfortunately, stage veteran Taymor makes a rookie mistake in the numbers that involve singing without dancing. In the theater, a solo performer standing still and singing on a bare or darkened stage can easily hold an audience’s attention. On film, however, that same situation quickly becomes uninteresting if nothing else is happening in the frame. Other directors of recent musicals have realized this and conceived their movies accordingly, but Taymor’s camera merely sits statically on Sturgess’ face as he croons “Something” and on Wood as she sings “If I Fell.” Ennui sets in, and the limp arrangements of those ballads doesn’t help — I found myself missing Ringo’s drumming.

Even when there’s visual stuff going on in the numbers, they don’t always work. “Revolution 9,” staged as a rant by Jude in Lucy’s workplace, falls extremely flat, while “I Want to Hold Your Hand” and “Let It Be” are subjected to worse mishandling, sung by characters we haven’t yet been introduced to in locations that haven’t been established. These numbers fail at a rather simple task, and the latter song is sung in the middle of a Detroit race riot, a regrettable lapse in taste. Through all the mess, sparks of invention constantly fly up, especially in the casting of the cameo roles. Joe Cocker turns up as a deranged homeless guy in the Port Authority bus terminal, rasping out “Come Together” while Jo-Jo walks by. Bono plays an acid guru who enthralls a crowd of partying socialites with “I Am the Walrus,” and Salma Hayek portrays five dancing trauma-ward nurses providing the chorus for “Happiness Is a Warm Gun.” Jude’s song with his new Princeton pals (“With a Little Help From My Friends”) has the right giddy energy. These numbers are clever, which is certainly better than nothing.

Then again, they seldom take flight, which is the least you’d expect for such a handsomely appointed labor of love. The only time the movie ever soars is during a moment of hushed beauty midway through when Jude, Lucy, and their friends lie in the grass and sing a shimmering a cappella rendition of “Because.” If only Across the Universe had some more moments like this, we’d be happy just to dance with it. Instead, it loses its way.

The King of Kong: A Fistful of Quarters
Starring Billy Mitchell and Steve Wiebe. Directed by Seth Gordon. Rated PG-13.