Home Music Listen Up Corrine West
SHARE
Facebook
Twitter
Corrine West quit school and left her California home when she was 15 to travel with nomadic artists in a converted school bus, looking for something more. Nothing was wrong with her home life — it just wasn’t enough. 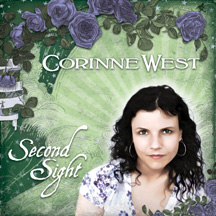 Second Sight, her second album, is filled with ideas that never get in the way of the energetic performances — strong bluegrass with echoes of old-time country — and the occasional pretty ballad. On “Cabin Door,” from her new CD Second Sight, she imagines that a High Sierra mountain river takes the world’s shame to the sea to cleanse it. On “Diamonds to the Wind,” she asks if we all are various shapes of the same thing. On “Hell Yes,” she endorses the wanderlust that lured her to the road. On the title song, she muses that what once was lost can be a new beginning. “Hand Full of Gold” is a slow, poetic, questioning song about longing, while “Gandy Dancer” evokes the Dixie Chicks in banjo mode.-Tom Geddie

West’s mid-range voice is pure and filled with the depths of ache and joy; that voice and her songs helped snag masterful producer Mike Marshall, who brought in A-list performers Darol Anger, Jerry Douglas, and Tony Furtado to fill out the crisp, clear sound. Second Sight is a spiritual album without a hint of organized religion, celebrating the nearly free human spirit with natural rhythms rather than rituals.