A couple of years ago, I sat at a table at J&J’s Hideaway with Wreck Room owner Brian Forella and developer Philip Poole. The hot topic was the Wreck’s future. 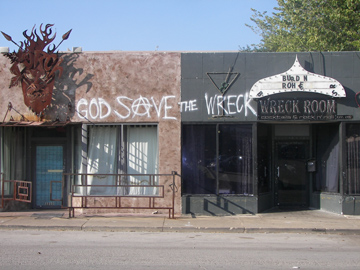 The nose of Poole’s bulldozer was already pointed at the historic rock club, and Forella was exploring options. One — close up shop — became a reality last weekend. The other — let Poole buy the place, polish it to a hue more appropriate for a Gap Kids than a grungy rock club, plant knick-knack and other clothing retailers around it, and charge Forella a zillion dollars in rent — was the option that Poole actually had the gall to float. He said something about his being a musician and how he understood the importance of an underground arts scene and how desperately he wanted the Wreck to stay. I discreetly grabbed a bev-knap and slid it in front of him. I figured that if he was going to unload a mouthful of bullshit, he might want to wipe his chin afterward.

From that moment, I always knew the Wreck was going to close but didn’t think much of it. There was always something else to do, some other band to see, some other friends to meet. Had I stopped to wrap my mind around the fact that one of the last vestiges of non-commercial culture in Fort Worth was going to disappear, I would have spent more time there. I would have taken the time to help other, more conscientious music and art lovers here document the place and all of its quirks, from the insane, insanely funny, or downright profound graffiti on the bathroom walls (“Dan McGraw hates Ebola,” “Kill time before it kills you”) to Jesse Sierra Hernandez’ paintings to the music and experiences that happened there. (One good reference point is Ken Shimamoto’s Wreck Room Stories: True Tales From the Home of Rock ‘n’ Roll in Fort Worth as Told by the People Who Were There, a story and series of interviews with regulars, employees, and musicians. For more info, visit his blog, http://stashdauber.blogspot.com.) Had I understood, I mean, really understood, the significance of the place, I would have done more. What? I’m not exactly sure, but I’m kicking myself for not trying to find out.

The past weekend was a blur of boozing, carousing, and music — lots and lots of music. The big night was Saturday, when The Me-Thinks played, and about 600 people came and went throughout the night. Sunday night, when I showed up, wasn’t nearly as packed, maybe 50 folks. But most of them were die-hard regulars who, evidently, comprehended the night’s import and would have dragged themselves out of the hospital or busted out of jail to say good-bye. All of the old-heads were there: Forella, his mom Veronica and brother Brendan, Dre Edmondson, Marcus Lawyer, O’s, Big Tony from Waco, Ken and his wife Kat (who had their wedding reception there), Country Contreras, Tim Burt, Darrin Kobetich, Jon Teague, Rod Dove, Quincy Wallace, Tad Gaither, Blackwell, McGraw, W.B. Massey, Tammy Gomez, Matt Hembree, Little B, Uncle Lee Allen, Amy Royer, Hank Hankshaw, Cadillac Fraf (who played on the roof earlier in the day), and a bunch of people whose faces I’d never seen but who looked familiar (Wreck regulars will understand).

Behind the bar was Billy Wilson and, onstage, Carl Pack, whose band, The Gideons, played the Wreck’s final show, which was only appropriate. They were the first band ever to play the club, lo, these 10 years ago, and, man, did they rock on Sunday. Even people who had never seen them before could have joined in with the other dozens of folks who shouted along to the chorus “Yeah, you gotta real sweet ass! / You gotta real sweet ass!” (Noticeably absent from the scene was bartender Graham Richardson, whose presence I saluted by doing a makeshift Gimp, a shot that he invented and only he can make properly — it tastes like a melted grape popsicle. Also missed was Gilbert Vera, R.I.P.) After The Gideons wrapped up, the night degenerated — or evolved? — into a free-for-all party: people dancing on the bar — a beer or shot in each hand — people dancing on the tables, people, basically, fiddling as Rome was about to burn. But how else did you expect the Wreck to go out? Quietly? Yeah, right.