Home Film Film Reviews Amanda Alert
SHARE
Facebook
Twitter
It probably didn’t happen this way, but I can easily imagine Ben Affleck in the midst of his 2003 Gigli-induced purgatory, taking time out to watch Mystic River and thinking to himself, “Hell, I can do that” (or words to that effect). 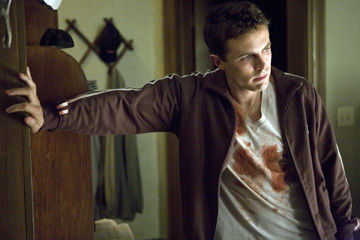 This week he makes his directing debut with Gone Baby Gone, which, like Mystic River, is based on a crime novel by Dennis Lehane. Both movies feature densely plotted mysteries that take place in the dingy blue-collar neighborhoods of Boston. Unlike Clint Eastwood’s film, Affleck’s isn’t transparently a chance for A-list stars to act in grand-opera mode. However, it’s stronger for being less pretentious, and it reveals that the much-maligned movie star has some serious game behind the camera. Affleck’s boldest move is casting his younger brother Casey Affleck in the lead role of Patrick Kenzie, who operates a private investigation business with his girlfriend Angie (Michelle Monaghan). Casey looks and acts nothing like his brother; he’s thin and delicate where Ben is broad-shouldered and macho, and his tiny little voice tends to shade over into whining. Perhaps that’s why he’s mostly been stuck in lightweight supporting parts — his most substantial previous role is in theaters right now, that of the pathetic and creepy outlaw wannabe Robert Ford in The Assassination of Jesse James by the Coward Robert Ford.

Casey’s performance here doesn’t show him to be a great actor hiding in plain sight. He has about as much chops as Milo Ventimiglia and considerably less than Jake Gyllenhaal, to compare two other actors with pretty faces and soft voices. Still, you have to admire the shrewd way his brother has cast him. Patrick is supposed to look overmatched, physically and otherwise, by the situations he finds himself in. In an early scene, he and Angie visit a bar in a bad neighborhood, where the patrons decide to gang-rape one or both of them. What gives the scene its menace is the fact that Patrick looks completely unconvincing as he tries to extricate himself by acting tough and issuing threats. (He only gets out alive because he pulls a gun.) Casey may not pull enough weight to carry most films, but his limitations dovetail nicely with the character and the context of the story.

That above scene is only a taste of the trouble that Patrick finds when he and Angie take on the case of a four-year-old girl named Amanda McCready, who’s snatched from her house one night in the run-down neighborhood of Dorchester. The police have already undertaken a massive hunt for her and her abductor, but Amanda’s aunt (Amy Madigan) isn’t satisfied, and she hires Patrick and Angie because they know all the local lowlifes who scurry away when the cops come calling. Their search leads them into a morass of tangled motivations and more than a few brushes with death, like a shootout in a house full of drug dealers and pedophiles. Even some of the cops whom Patrick and Angie work with don’t play straight with them, a sign that this apparently straightforward case will rattle the skeletons in some powerful people’s closets.

The investigators sit down with all manner of bad characters here, but the most vivid is Amanda’s mother Helene, played by Amy Ryan in one of the most dislikable performances in recent years. A junkie and a thief who seems positively uninterested in finding her kid, Helene instead spends her time cracking racist jokes, lashing out at people trying to help her, and generally giving white trash a bad name. The cops, the private eyes, and Helene’s own relatives ooze all kinds of disgust at this woman whose parenting skills leave you wondering if Amanda wouldn’t be better off in the hands of a more fit mother (Britney Spears, say). In a supporting cast that includes Morgan Freeman and Ed Harris, it’s Ryan who stands out for her unsparing depiction of an ignorant, self-absorbed monster, and for fearlessly rejecting any sort of sympathy even in such a sympathetic situation.

This director’s eye for his actors’ performances and the downmarket Boston atmosphere comes as no surprise. What’s less expected is the assured sense of pace and tone that Ben Affleck brings to this thriller. His storytelling is mostly unobtrusive, but when he switches to a more obvious device (like the quick series of cuts to black screens when Patrick sees something nasty in a child molester’s basement), it usually works. Like many first-timers, the director makes a few rookie mistakes. There’s a lot of unnecessary voice-over narration in a lengthy sequence in the middle, and a clunky scene near the end with Patrick confronting the bad guy, whose identity will be quickly sniffed out by sharp-witted moviegoers. Even so, Ben Affleck does commendable work capturing the flavor and essence of Lehane’s novel and turns out a picture that stands with any of the mature dramas now playing to sparse audiences at the local multiplex. Bravo, Larry Gigli.