Kaz Murphy must have picked up some of his storytelling ability from his days as accompanist/drummer for legendary Beat poet Allen Ginsburg. 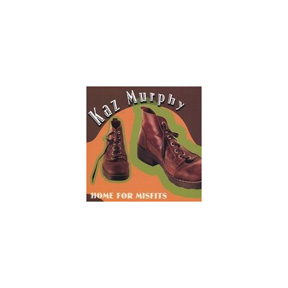 Murphy’s songs, often delivered in a pleasant drone here on Home for Misfits, his third solo album, deal with troubled lives and a hint of hope: “If you know where you are now,” he sings on “Below the Skin,” “it doesn’t matter where you’ve been.”
While much of Murphy’s earlier work fit into the loose alt-country slot inspired, he has said, by Dylan, Cash, Leadbelly, and Bobbie Gentry (remember her?), Home for Misfits is mostly a pop-rock collection culled from the much-traveled musician’s two-year stint in the Los Angeles roots-rock scene after stops in Philadelphia, New Jersey, Santa Fe, Tokyo, Seattle, and Rome.

On the 11 songs, the former frontman for the band Mad Mad Nomad also deals with a once-aspiring Hollywood actress who’s settled for delusion (“Anything She Wants”), a Southern belle who stands her ground (“Brimstone Daddy”), ideas we “don’t need to know” or understand (“Midnight Fire”), ex-lovers who haunt us (“Walk These Hills”), and other notions on the far edge of fitting in. Murphy probably has never claimed to be a great singer, but he does have a knack for telling straightforward stories that illuminate the human condition, as if Earth really were a home for misfits. -Tom Geddie