A young girl, driven to the evils of tobacco and alcohol by her mother’s refusal to take her to church, drops her cigarette in a trash can. The resulting fire envelops both her family and their souls. Why their souls? Because the teenager had never tried to convert her friends or her mom to Christianity. 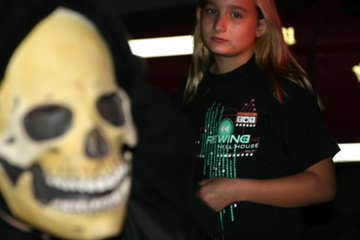 “So when they die, you know they’re going to hell,” explained Mallory Neal, a 17-year-old Azle High School senior who portrays the convert-less smoker. If that scene doesn’t grab you, try the dark, smoky “jail cell” down the hall, where, as seizure-inducing strobe lights blink frantically, another young girl shrieks at the sight of a demonic figure with a skeletal face. The black-cloaked horror, giggling ominously, offers its congratulations to the girl who had just permanently crippled her sister and killed a friend in a drunk-driving accident. One room over, a handful of teens brawl in their fight club. Next door, three children huff paint out of a brown paper bag, while their drunken mother yells in Spanish.

The DELETE’s a little heavy-duty for your typical group looking for a few laughs and screams at a haunted house. But it’s bringing them in droves to the Victory Christian Center’s “Hell House” in Azle. And not just to the haunted-house door, for their $9 admittance to the 45-minute Christian fear-fest. Victory youth pastor Don Jobe said it’s bringing people to Jesus.
“This year we’ve had 23 people saved for the first time, who have never had any type of relationship with God,” he said, as he read the figures from a spreadsheet that the staff updates each weekend. “We’ve also had 63 people rededicate their life, which means they’ve been saved but they feel like they’ve fallen away from God, and they want to rededicate their life to God because of something they saw. And we’ve had 49 people come in for prayer request — they saw something in a scene that relates to their life and wanted to pray about it.” As of Oct. 20, he said, of the 400 people who had come through the house, 140 fell into one of those categories.

Church leaders have been using scare tactics for centuries to bring their sheep back to the fold. And the popularity of Hell House suggests that Azle teens may be ready for some fiery Old Testament-style reminders — enhanced by 21st-century technology — of the consequences of their actions. “People don’t want to hear about hellfire and brimstone, so when you go into churches nowadays, it’s all about God’s love — and that’s all true — but I think we’ve lost something,” Jobe said. “When you go to an event like this, it kind of shocks people. We’re not fabricating anything that could not become true. Everything we’ve ever done is something that you see on the news or something that these kids are going through.” When parents come through, he said, “they thank us.”

D’ann Dagen, the founder and producer of Hangman’s House of Horrors in Fort Worth has never attended anything like the Hell House (she’s pretty busy on those nights) but has had some contact with its producers through Magic Etc., the costume shop that shares a space with Hangman’s. She is a life-long Christian who believes that the Hell House and others like it obscure the message of Jesus. “I’m not opposed to the idea of what they’re attempting to accomplish, which is to introduce people who may not have made a decision about their lives and their relationship with Jesus Christ,” she said. “However, as a Christian, I find that that is not the message Jesus spoke of — trying to scare people. It was more trying to love them and help them understand that God is first and foremost love. It disturbs me a little that that is the attitude of the production of those houses.” 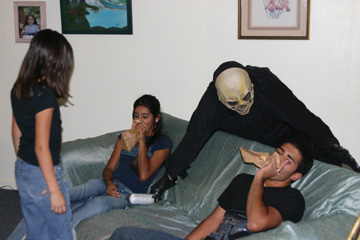 The irony, of course, is that haunted houses traditionally are part of a holiday that many conservative Christians are opposed to, because they believe it celebrates evil, witchcraft, and other pagan ideals. That didn’t bother Janice Lutz, a 43-year-old hairdresser who brought her two kids to Hell House. She’s not opposed to traditional haunted houses, she said, but she’s grateful for the message-driven alternative. “It gives Christian kids something to do on Halloween,” she said. “People are going to celebrate it anyway, so you might as well get some truth in there.” Her daughter, Joy Cheek, 13, liked it. “This is more realistic [than other haunted houses], because these things can actually happen,” she said.

Dagen, whose haunted house is in its 19th year and has made more than $1.4 million for charity, said that anyone who thinks that Halloween is promoting evil is missing the point. “The first haunted house I ever attended was at my very conservative Baptist church in Dallas, where I grew up,” she said. “I never perceived it as anything Satanic, evil, or macabre.” A couple of weeks ago, on a cool Saturday night, a line of about 50 or 60 people waited eagerly to catch a little glimpse of Victory’s version of hell. This is the third year the church has put on the event, and the 2007 theme is that people cannot rewind their lives and take back bad decisions that can irreparably harm body and soul, through real-life problems like paint huffing and the proliferation of fight clubs.

A “death” guide was taking visitors from room to room, skit to skit. After five or so vignettes, the groups got to meet the central players in the fight for their souls: the devil and Jesus. At first, Satan looked like a maitre d’ at a shabby restaurant, dressed in an all-white tux, speaking seductively with a hint of a Texas accent. Then, one room over, he was transformed into a Lord of the Rings orc, who leapt out at the gathered throng, careful not to touch them. In the final leg of the Hell House trip, kindly women with glitter-spangled faces, dressed in white, took over for the death guide and led the group through Christ’s crucifixion and resurrection. The tour ended with a brief “counseling” session, in which young preachers put the tour into perspective — and offered themselves as conduits for salvation. “I never thought about death or heaven or hell or how it affects you,” said Autumn Dooly, 18, who was “saved” at last year’s Hell House and came back this year as a volunteer.

She wasn’t looking for any religious awakening when she went in last year, she said, but found scenes such as the ones depicting an abortion and a school shooting particularly scary. Before her experience at Victory, she said, she believed in God but never attended church. Now a regular churchgoer, she said her overall outlook on life has improved. Neal, who wrote and appears in the smoking-teen skit, said she created it to show her peers how fleeting life can be and that there are consequences to not caring about their souls. “One day teenagers will love God and the next they’ll go party,” she said.
Many of her non-Christian friends have been through the house, she said, with varied reactions. Some just see it as another haunted house, she said, but “I’ve had a couple of friends who have really got the message, and a couple who have even been saved [because of] it.”

Dagen doesn’t mind the idea of people finding Jesus through the Hell House, as long as it’s not a hurried decision born out of fear. “If there is follow-through done with people who are shocked enough to want to make a thoughtful investigation into what they want to do with the rest of their lives, and the Hell House is a way to get them to stop and think, then that’s great,” she said. “If it’s simply matter of entrapping people in a room and torturing them until they feel inclined to agree with them, not only is that not a positive step, it’s probably several steps back in terms of their [salvation.]”