You remember Donnie Darko. Six years ago, this feature debut by then-26-year-old writer-director Richard Kelly captivated audiences with its phantasmagoric style, unleashing an intriguing dark side of Jake Gyllenhaal that we haven’t seen since and showing us how frightening a large talking bunny rabbit could be. In addition to all that, you may also remember the confusion that reigned in that movie’s last 10 minutes or so. 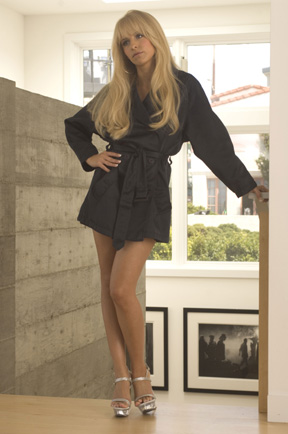 Well, the whole of Kelly’s long-delayed second film, Southland Tales, feels every bit as confusing as that. This spectacularly unhinged, apocalyptic epic is the craziest thing I’ve seen all year. The movie begs to be called a masterpiece, with its flashes of pure brilliance and its black-comedic soul. It isn’t, though. It’s actually rather bad but audaciously and hypnotically so. Southland Tales takes place in July 2008, three years after a nuclear terrorist attack has destroyed Abilene, Texas, and the Bush White House has placed the United States under martial law. The country may be a police state, but it feels more like anarchy in Venice Beach, Calif., where the film mostly takes place. Cops kill civilians with impunity, liberals have become terrorists with the same murderous tendencies, and scantily clad young people obliviously party by the ocean through the whole thing. (By the way, the film’s structured as the final three chapters in a six-part saga. The first three are available only as graphic novels — I haven’t read them.)

With the Republicans poised to win the upcoming presidential election, three characters emerge as agents of change: Boxer Santaros (Dwayne “The Rock” Johnson), a Republican action-movie star who disappears for three days and turns up in the desert with amnesia; Krysta Now (Sarah Michelle Gellar), a porn star and Boxer’s mistress, who has ties to the terrorists and dreams of running her own business empire; and Ronald Taverner (Seann William Scott), a disgruntled Iraq veteran who’s now aiding the terrorists by impersonating his twin brother Roland (Scott again), a cop who’s been kidnapped and drugged. Their stories are narrated by Pilot Abilene (Justin Timberlake), a former celebrity-turned-facially disfigured soldier with a fondness for illegal drugs.

The above paragraphs offer just a tiny taste of the Pynchonesque wackiness on display here — other plot elements include a Euro scientist (an orange-haired Wallace Shawn) who solves America’s energy crisis with a perpetual-motion machine, a screenplay co-written by Boxer and Krysta that presages the end of the world, and a lot of metaphysical speculation on time travel and the transmigration of souls. Kelly’s writing is larded with literary references to the Bible’s Book of Revelation, Robert Frost, T.S. Eliot, Philip K. Dick, and the lyrics to a song called “Teen Horniness Is Not a Crime,” which is a track from Krysta’s pop-music album. His visual techniques run equally wild — web site interfaces, rotoscoping animation, bizarre weather patterns, and musical numbers are thrown at us with promiscuous abandon. (One highlight: Timberlake dancing around a video arcade with a bunch of showgirls while lip-syncing to The Killers’ “All These Things That I’ve Done.”) What makes the movie such an absorbing first-time viewing experience is that you don’t know what kind of insanity is lurking around the next corner.

Of course, often the insanity is simply arbitrary and purposeless — I’ll be damned if I can figure out why the scientist sees fit to chop off one of the Japanese prime minister’s limbs or the significance of the overlong interpretive dance piece performed by Gellar, The Rock, and Mandy Moore as Boxer’s wife. While a film like this probably shouldn’t be tidy and carefully constructed, you still can’t help but notice how the story arcs for the supporting characters lead up blind alleys, and even the main characters disappear for inordinate stretches of this 144-minute opus. Some of the dialogue is jaw-droppingly bad — “Make fun of my prophecies all you want, Fortunio” — and the performances range from half-baked to overheated, even though the stunt casting here is often a blast. (Jon Lovitz as a white-haired fascist cop! Kevin Smith as an elderly webmaster who dresses like a 1970s kung fu movie villain!)

Worst of all and despite some mighty efforts, Kelly fails in his attempt to capture the disconnected state of American culture in these surreal times. This movie’s depiction of conservatives, liberals, and the apolitical should be absolutely scathing — we all know Kelly can scathe pretty good. Yet he never gets a grip on the realities that these various groups are blind to, even though he does stage a McLaughlin Group-style TV show with Krysta and her airheaded fellow porn stars discussing the issues of the day. The filmmaker’s talent appears to suit him better for Tim Burton-like fabulism than Michael Moore-like satire. He is only 32 and might well acquire enough political savvy to make a zeitgeist-changing black comedy on the order of Dr. Strangelove down the road. For today, Southland Tales is too incoherent and naïve to strike more than a glancing blow, as funny and acid-trippy as it frequently is.