Home Film Film Reviews Make It Right
SHARE
Facebook
Twitter
So many movies are about people seeking revenge over wrongs done to them that it’s worth noting that there are two prestige pictures coming out about people trying to right the wrongs they’ve done to other people. 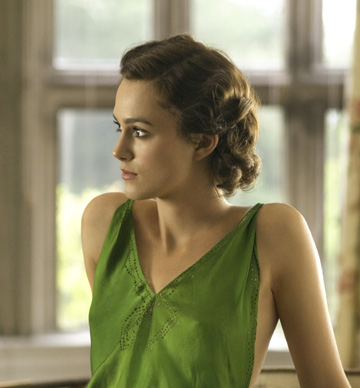 The Kite Runner and Atonement share more than just the theme of redemption. They’re both adapted from widely acclaimed recent novels with devoted followings, and they both turn out as worthy movies that aim for greatness. They both fall short, too. Atonement is based on Ian McEwan’s astonishing 2001 novel, which begins as a detailed character study in an Edwardian drawing room, then abruptly shifts into a World War II saga, then morphs again into a meditation on authorship and the power of fiction. When I was reading the book, I thought a remarkable film stylist would be needed to keep up with the author’s shifts in tone and focus. Joe Wright is not a remarkable film stylist, though he is pretty talented, and he wins a great many small victories in wrangling McEwan’s novel to the screen. For all that, when everything was said and done, it still left me cold.

The story begins with 13-year-old Briony Tallis (Saoirse Ronan) writing a play in preparation for her cousins’ visit to her parents’ English estate on a stifling summer day in 1935. The day turns fateful when she walks in on her older sister Cecilia (Keira Knightley) having sex with Robbie Turner (James McAvoy), the housekeeper’s son who’s attending Cambridge on the Tallis family’s pound sterling, hoping to one day be a doctor. Too young to understand what she’s seen, Briony interprets the encounter as some sort of attack, and when her cousin Lola (Juno Temple) is raped later that night, Briony has no trouble convincing herself or the police that she saw Robbie commit the crime.

Wright, who teamed with Knightley for the 2005 adaptation of Pride & Prejudice, ruthlessly edits this opening section to within an inch of its life. The jump cuts are whiplash-inducing, and the exchanges of dialogue (penned by Christopher Hampton) are terse. The quick-hitting style helps the movie play like a brittle Evelyn Waugh-style comedy, never more so than when Robbie encloses the wrong draft of a note in an envelope to Cecilia, sending her a graphic typewritten sex fantasy instead of the lyrical handwritten love note he intended for her. Occasionally Wright steps wrong; an early scene of Cecilia lounging at her mirror with a cigarette while music from La Bohème plays on the soundtrack looks like it belongs in a perfume ad rather than a movie.

After this terrible day, the movie then leaps ahead five years. Robbie has been freed from prison to fight the Nazis in northern France, and his dreams of meeting Cecilia again spur his efforts to keep himself alive during the Allied retreat from Dunkirk. Meanwhile, 18-year-old Briony (Romola Garai) works in London as a volunteer nurse, treating wounded soldiers and looking for a way to expiate the crushing guilt she feels. Wright’s cinematic vocabulary loosens up somewhat in this section. He executes a big, showy tracking shot of the British soldiers awaiting rescue on the beach at Dunkirk, passing the time by fighting, getting drunk, singing, riding a merry-go-round, and any number of other activities. Later, he gives us another expansive shot of Robbie running after the bus carrying Cecilia — David Lean would have been proud. Still, even in the movie’s smaller moments, the director does things worth admiring from a formal standpoint, like the striking shot of the older Briony walking down a hospital hallway while the overhead lights go on one by one or the gracefully unobtrusive pan over the nurses’ quarters in the same location, catching the young women as they get ready to turn in for the night.

All this is great, but the movie’s too emotionally distant to sweep us up like an epic should. The gross injustice that comes down on Robbie in the first act doesn’t have the steel-jawed tragic inexorability that we’ve seen from sterner stuff like No Country for Old Men and Before the Devil Knows You’re Dead, and the big revelation at the end of the film will affect only those who aren’t familiar with McEwan’s novel. The actors are strangely muted, too, except for Ronan, the American-born actress who embodies young Briony’s sharpness, willfulness, and overactive imagination so well. McAvoy, Knightley, and Garai perform as if they’ve all been instructed to pull back at the big dramatic crests, especially in the late scene when the older Briony finally faces up to her actions in front of Cecilia and Robbie. None of them give bad performances, exactly, but they’ve all been better elsewhere, and the movie might well have been overwhelming if they’d been allowed to really cut loose. While Atonement isn’t stodgy and prosaic like much British drama even today, it does fall victim to the famous British stiff upper lip. For a work so full of tragic ironies, that may be the biggest one of all.

The tragedy in Atonement springs from a pitiless chain reaction of avoidable circumstances and human failings, set against the backdrop of war’s devastation. The Kite Runner follows a similar path and similar setting, though it may not seem so at first — Afghanistan, after all, is a place that’s spent much of the last quarter-century being torn apart by war. When he was 11, Khaled Hosseini left his native Afghanistan in 1976 with his diplomat father, who was assigned to Paris. He remembered it as a peaceful and happy place of bustling markets and cosmopolitan ideas. The Soviet invasion left his family stranded, and Hosseini spent much of the next quarter-century in America, where he became a doctor. After U.S. forces liberated his homeland in 2001, Hosseini visited and found it ravaged physically and spiritually by the Soviets and the Taliban. He incorporated his experiences into his flawed but vibrant debut novel which came out in 2003 to the warm embrace of America’s readers.

The first part of the film takes place in pre-invasion Afghanistan, where young Amir (Zekeria Ebrahimi) is a privileged child of intellectuals belonging to the country’s Pashtun majority of Sunni Muslims. This doesn’t stop him from making a best friend out of Hassan (Ahmad Khan Mahmidzada), his family’s servant boy, who’s in the minority both ethnically (Hazara) and religiously (Shiite). On the triumphant day when Hassan helps Amir win the city of Kabul’s annual “kite war,” the servant boy falls into the hands of the local bullies, who hold him down and rape him. Amir watches this happen, and the guilt he feels over his inability to protect his friend makes him turn on the devoted Hassan and drive him out of their house. This part of the story takes up roughly the first half of the movie, and it’s terrific stuff. Director and stylistic chameleon Marc Forster does this up like an Iranian film, mimicking the eye for naturalistic detail, focus on children’s lives, and delight in simple things. The friendship between Amir and Hassan is depicted in shimmering colors by David Benioff’s DELETE and by the performances of the young actors, which makes the rupture between them all the more wrenching. The special effects used to depict the kite war is something you wouldn’t see in an Iranian film, and it helps add a note of exhilaration to the early going.

Unfortunately, the movie loses steam once the story reaches America. Amir and his family flee to the San Francisco Bay area after the invasion, and the movie turns painfully ordinary depicting the adult Amir (Khalid Abdalla) and his father (Homayoun Ershadi, who starred in one of the greatest Iranian films ever, A Taste of Cherry) trying to adjust to life in exile. It takes a different but no less conventional turn when Amir ventures into Taliban-controlled Afghanistan to rescue Hassan’s young son from the extremists’ clutches, becoming a mediocre action flick that whitewashes the brutality that Hosseini described. The Kite Runner was supposed to have been released last month but was delayed so that the children who played major roles in this movie could be taken out of Afghanistan. Apparently, no one checked with cultural authorities, who might have informed them that enacting a rape scene would place the child actors in danger from their fellow Afghans once bootleg copies of the movie started to reach the streets there. The kids are safe, enjoying a holiday in the United Arab Emirates and probably having a lot of fun right now, but they may not be able to see their homeland again for a long time. These well-intentioned but poorly informed Hollywood filmmakers recruited some local kids to star in their Oscar-contending movie and then unwittingly got them uprooted from the place they grew up in. It sounds like material for another book.