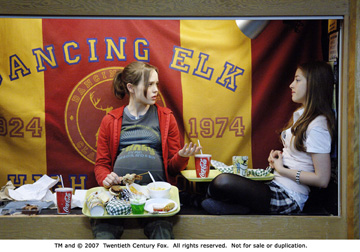 It’s one of those glib formulations that we critics are always coming up with, and it slights Judd Apatow’s imperfect but uproarious comedy. The thing is, sometimes the easy assessment is also the one that’s spot on. I hate when that happens, but given that this movie is so charmingly spiky and moving and funny, I can let it slide. I can do better than that, actually. I can tell you that this little film is one of the year’s best.

The movie takes its name from Juno MacGuff (Ellen Page), a 16-year-old western Minnesota girl whose low-maintenance look belies her fiercely cultivated tastes in old-school punk rock and Dario Argento horror movies. She cops early on to not knowing what kind of girl she is, but in truth her sense of herself is pretty solid, and it’s somewhat awe-inspiring to see how little her pregnancy knocks her off stride. (To be fair, everybody around her does exactly what they’re supposed to do and supports her.) After initially deciding on an abortion, she reverses course and decides to let someone adopt her baby, “maybe a woman with a bum ovary, or a nice couple of lesbos.”

Page’s performance is catching Oscar buzz, and while I think Linda Cardellini in her Freaks and Geeks years would have done this role to much the same effect, this is nevertheless a great vehicle for the skills of this diminutive 20-year-old Canadian actress who played a teen superheroine in last year’s X-Men: The Last Stand and made a much larger impression in Hard Candy as a psychotic pre-teen who dangles her 14-year-old self as bait to catch child molesters. Here, Page does fine understated work, capturing Juno’s fears and anxieties beneath her deadpan, world-weary exterior. Page is a particularly inspired match opposite Michael Cera as Paulie Bleeker, Juno’s friend and bandmate who fathered her child during a one-time thing and whom she continues to address by his last name. Paulie’s emotions are so close to the surface that the way Juno messes with him throughout the movie would be hard to forgive if she weren’t hiding a few feelings for him from herself.

The DELETE is by first-time screenwriter Diablo Cody, who’s better known as the former stripper-turned-weblogger and author of a best-selling volume of memoirs. She’s guilty of occasionally trying too hard to be cool, especially near the beginning, when a convenience store clerk (Rainn Wilson) points to Juno’s positive pregnancy test and says, “That ain’t no Etch-a-Sketch. That’s one doodle that can’t be undid, home skillet.” Juno tries to shut him up with a “Silencio, old man!”
Yet Cody does locate a groove while retaining the DELETE’s distinctive flavor. Juno analyzes a well-worn phrase: “I hate it when adults use the term ‘sexually active.’ … Do I, like, deactivate some day, or is it sort of a permanent state of being?” Unexpected words pop off the screen, too, as when Juno’s best friend Leah (Olivia Thirlby, doing a dizzy little variation on the stock part of a vacuous cheerleader) scans adoption ads and reads off, ” ‘Wholesome, spiritually wealthy couple have found true love in each other.’ Aw! All that’s missing is your bastard.”

The writer can do more than pen snappy one-liners, too. She creates multilayered supporting characters like Juno’s kind, nurturing stepmom (Allison Janney), who takes the head off a judgmental ultrasound technician. Cody can also do a great comic set piece, like the deliciously awkward early scene in front of an abortion clinic, where Juno and the lone pro-life protester stationed there (Valerie Tian) recognize each other as schoolmates. They chatter about classwork and uppers, they’re both clearly embarrassed to be seen there, yet they’re both thinking, “Oh, you’re here. And you’re doing that.”
The movie reaches full bloom when Juno decides to give the baby up for adoption to Mark and Vanessa Loring (Jason Bateman and Jennifer Garner) of St. Cloud, whom she finds via the PennySaver. While Vanessa comes off like a desperate housewife with her ultraconservative business suit and her neatly arranged house, Mark is a commercial jingle composer whose tastes in movies and music matches Juno’s. The girl cottons to him immediately – their first meeting, intended to finalize the legal arrangements for the adoption, turns into a jam session with Juno playing Mark’s Les Paul guitar. However, the Lorings both run far deeper than the initial impression they give off, and Juno’s evolving relationship with them forces her to face her own issues and gives the movie its surprising dramatic power.

Director Jason Reitman produced scintillating satire in his debut film, last year’s Thank You for Smoking. He takes a rougher, more lo-fi approach here and shows that he can handle material with greater maturity and emotional heft. Juno is that rare film that catches director, writer, and star as emerging talents, which is probably why it feels so fresh. That, and the gratifying sight of a girl commenting on what boysenberry-flavored condoms do for a guy’s penis. After a summer dominated by guy comedies, the female perspective is just what we need.