On Who Knows What We Might Do, the popular, three-time Grammy-nominated “kids’ duo” Trout Fishing in America produces itself for the first time and turns out an album aimed straight at adults. It’s not an especially dark CD, just a concerned one. 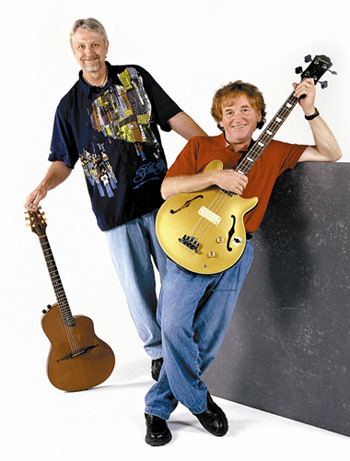 Taking its name from a quirky novel by Beat poet Richard Brautigan, Trout Fishing in America has always mixed music for kids with music for adults. As a result, the duo of Ezra Idlet and Keith Grimwood has been able to play just about anywhere, from the staid Today Show to the insane Dr. Demento. Former members of the critically acclaimed, ’70s-era folk-rock group St. Elmo’s Fire, Idlet and Grimwood inhabit a land on this five-song EP where a middle-aged mother in sensible clothes gets her first tattoo and a middle-aged man suddenly begins to ride his grocery cart like a scooter, where “the good news is the bad news that isn’t nearly as bad as it might have been,” and where “when America comes home … home to a dream / A dream of itself / What it could be / What it should be / If it could be someone else.”

The musicianship and shared vocals are excellent, with Grimwood playing bass and Idlet on various guitars, djembe, tambourine, banjo, udu, and percussion. Onstage, Trout Fishing in America’s visual gimmick is the contrast between the 6’9″ Idlet and the 5’5″ Grimwood. On CD, of course, that superficiality disappears into a seamless musical and lyrical blend. – Tom Geddie