Lyrics to an old Johnny Cash song run through my brain with every trip to my mailbox. 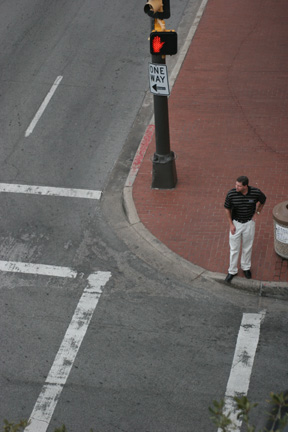 Feeling like prey comes naturally to somebody who for more than two years has been hounded by Dallas County extortionists whose threatening letters begin with a warning – literally. “WARNING!” (capital letters and exclamation point are theirs) is the subject under the Linebarger Goggan Blair & Sampson letterhead. The law firm goes on to demand $93 within five days. Nine of these letters have graced my mailbox since November 2006, which means I’m just about due for my next quarterly threat. The letters say a “warrant may have been issued by the court!” and, in boldface, “If a warrant has been issued, you may be arrested at any time by any peace officer.”

My crime: jaywalking – almost eight years ago. My accuser: A Dallas Area Rapid Transit (DART) cop who may have been cloned from Barney Fife. My thorn: A court system designed to make you plead guilty and pay a fine. On Sept. 5, 2000, I was working as a reporter in the Fort Worth Star-Telegram’s Dallas bureau. That morning, a downtown water main broke, flooding streets and interrupting service. I drove to within six or eight blocks of the mess, parked, and spent the next few hours talking to city officials, residents, and witnesses. Afterward, on the way back to my car, I walked up to an intersection where two police officers were standing. Together we waited for the pedestrian “Walk” sign to light up. None of us spoke. Seconds turned into minutes, and still we stood. I turned toward the DART officers to say something like, “Hey, the light’s stuck,” but one of them met my eyes and glared at me. He was a sawed-off guy with a military haircut and an attitude, and so I said nothing. DART cops are licensed peace officers with guns, pepper spray, and handcuffs, and this one didn’t seem friendly. The three of us waited in silence.

During a span of three or four minutes, hardly a car passed, perhaps due to the nearby detours and blocked streets. The scene was getting ridiculous, and I snickered out loud. The short cop stared at me, then nodded to his buddy. They turned around and walked south, in the opposite direction. I stood another 20 seconds, glanced over my shoulder and saw they were a half-block away, and then I crossed the still-empty street. Five steps into the crosswalk I heard a command hollered from a distance: “Stop!” Confession: I knew it was the DART cop with the short-man syndrome, but I pretended not to hear. I kept walking. Before long, a Dallas city police officer whizzed up beside me on a bicycle and told me I was being summoned. We waited for the DART cop, who was red-faced and hustling my way. “So, you wait until we turn our backs and then walk against the light, huh?” he said, angry and out of breath. “That light’s broken,” I protested. The light still hadn’t changed. (I returned the next afternoon to time it and found that it had been repaired – the light was changing about every 45 seconds.)

The bicycle cop gave me a half-smile and all but rolled his eyes as the DART cop scribbled up a jaywalking ticket and thrust it at me. “See you in court,” I said, cramming the pink slip in my shirt pocket. Little did I know I’d still be seeking my day in court years later. Pleading guilty is no problem – send money by mail or pay online (all major credit cards accepted). But try to plead not guilty, and it’s hello Alice in Wonderland. The ticket instructed me to go to a justice of the peace court in south Dallas to make my plea. Turned out that the office was closed between noon and 1 p.m., making it impossible to conduct business during a typical lunch hour. After it reopened, I stood in line and eventually told the clerk I wanted to plead not guilty, but she said I wasn’t “in the computer.” DART hadn’t sent my ticket information. “You’ll have to come back later,” she said. How much later? “A week,” she said, not sounding as if she really knew or cared.

A week passed, and I returned, but again the ticket wasn’t in the computer. “Keep checking back with us,” she said. Huh? I was supposed to make regular visits to an out-of-the-way office and stand in line to ask an overworked clerk if I was in a computer? The clerk told me I could pay the ticket and be done with it. Not a chance. Eventually, I went to work for Fort Worth Weekly and forgot all about DART. Five years passed. Then one morning I opened my mailbox and found a letter from a law firm working as a collection agency for Dallas County, telling me to send $93 or face arrest. I called to complain and was told to call the justice of the peace. On Nov. 22, 2005, I called and talked to the justice’s court clerk, Yolanda, who said my case file was being transferred but hadn’t yet arrived. She told me to call back. I called a month later. It still hadn’t arrived. I tried to ask Yolanda questions but got mostly silence except for the telepathic message coming through loud and clear over the phone line: “I don’t want to talk to you anymore, you pesky person. Please go away.”

I persisted, and Yolanda told me to fax the court a letter stating my intention to plead not guilty, which I did. More phone calls over the next few months prompted Yolanda (who would not give her last name) to tell me with more than a hint of frustration in her voice, “We are waiting for the file to arrive. When it does, we will give you a call.” By then, I’d noticed a Dec. 8, 2005, story by Dallas Observer columnist Jim Schutze, entitled “Bus Gestapo,” about DART cops who, according to witnesses, stopped Todd Lyon and his 14-year-old son for jaywalking and, when Lyon protested, wrestled him to the ground, beat him, handcuffed him, and Maced him. The boy was left to fend for himself while his dad was carted off to jail and held for 11 days because he didn’t post bond. Schutze tried to investigate but found DART to be a stonewall fortress, a regional agency with a self-policing police force and appointed (rather than elected) board members.

“They do not care,” Schutze wrote. “Their lawyer wouldn’t talk to me. I called every DART board member from Dallas, and they either didn’t return my calls or refused to talk to me… . Just getting their phone numbers was an entire afternoon’s chore.” The story struck a nerve with Dallas readers, and Schutze said he heard from about 50 people with similar stories, including calls from Dallas police “complaining about DART cops being poorly trained and being cowboys,” he said.
Schutze wrote another story about Lyon (“Help, It’s the Police,” April 20, 2006) after DART police allegedly spotted him downtown and roughed him up while taunting him about the Observer story. Last year, a DART cop shot and killed a 15-year-old boy who allegedly leaped from bushes and attacked officers. DART claimed self-defense. The boy was unarmed.

Shutze still hears from readers decrying a bizarre system that steers DART citations to JP courts run “like a scene from hell,” he said. “You could say that this is a result of disorganization, but it’s gone on for years,” he said. “There is a point where you think maybe they know exactly what they are doing, that the basic rationale is, ‘Pay the money.’ ” Dallas County officials have little oversight – justices of the peace are elected and answer mostly to voters. State Commission on Judicial Misconduct executive director Seana Willing said some courts become backlogged and are poorly managed, including a JP court in Dallas that has been disciplined several times. My ticket is at a different court but in the same precinct.
I told Willing about the collection letters, and she bristled. “Only a judge can enter a judgment against you,” she said. “Presumably that would be after your day in court.”

The intent of the letters seemed clear to her. “They are just hoping you are going to pay, which means you are pleading guilty and waiving your rights,” she said. “They are hoping the average citizen will just be scared and pay it.” She doubted the threatening letter would lead to an arrest. “They are not going to be able to jail you, hopefully,” she said. “This is just insanity.” DART says it’s not to blame. “It’s not our process – it’s the process that the justice of the peace has in place for all of their tickets, like traffic tickets or anything else,” DART spokesman Morgan Lyons said. Maybe so, but it’s the DART information that never seemed to make it to the court’s computers. On March 8, 2007, I called Yolanda to complain about the threatening letters. But she said they would continue being sent “until the day of court.”

Any idea when my day in court would arrive? “No,” she said. I called again just a few days ago. This time, a woman named Brenda answered. I asked what I could do to settle this dispute. She said she would request my file – the same thing Yolanda said two years ago.