Charlie Bartlett was supposed to come out last August. (In fact, that’s when I first saw the movie.) 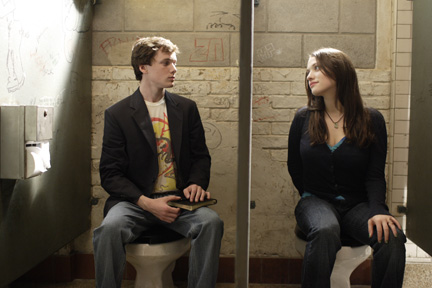 But its release was postponed until now, presumably so it wouldn’t get crushed at the box office by that other male-oriented high-school comedy, Superbad. That’s understandable, even though the two movies couldn’t be more unlike. Where Superbad was raunchy and zany, this film is sophisticated and whimsical. To be honest, I initially pegged Charlie Bartlett as a Rushmore knockoff, albeit a very funny one. On second viewing, it looks closer to Juno, which is a more flattering comparison. You can easily imagine Charlie and Juno turning up at the same high school and finding a lot to talk about, like how their movies treat teen issues with subtlety rather than soap and keep us laughing the whole time.

Anton Yelchin plays Charlie, a polite but troublemaking rich kid who’s been expelled from every private school he’s attended, the latest for using a laminating press to manufacture high-quality fake IDs. So he goes off to public school, showing up on his first day carrying an attaché case and wearing a blazer and tie. Within the hour, school bully Murphey (Tyler Hilton) is shoving his head in a toilet in the boys’ restroom. Undaunted, Charlie’s soon running a private counseling practice for his fellow students out of that same bathroom, dispensing sympathetic advice to guys with gay tendencies and girls mulling over cosmetic surgery. When some of his patients report suffering from depression or panic attacks, he illegally obtains psychiatric drugs for them. He even enlists Murphey’s help, and when he discovers that the bully has been videotaping his own beat-downs of various kids, Charlie’s response is inspiringly creative (and too good a joke to give away).

The precocious and entrepreneurial Charlie is a potent comic creation. Much like Juno, he’s smart, resourceful, self-possessed, cool but not unflappable, and engagingly odd – when trying out for the school’s Shakespeare play, he auditions by delivering a 13-year-old girl’s monologue from a bad TV movie. The choice of material is appropriate: The 18-year-old Yelchin does have a girlish voice that seems to repel any attempt at gravity. His pie-eyed, faux-innocent demeanor can come off as smug, and his diction is extremely fussy (a way of hiding his native Russian accent, which nevertheless surfaces in this movie’s climactic scene). These qualities make the actor an acquired taste for many, but they also perfectly suit him to the role here. Charlie’s transition from social outcast to high-school hero comes off as believable, not least because Yelchin embraces the character’s goofy sense of humor – the scene where he tries to dance with Murphey at a party is entirely winning.

Even more charming is Charlie’s eventual willingness to see through his status as Mr. Cool and recognize his own fallibility. He struggles with his anger at his absent dad, and he can’t stop a sad case named Kip (Mark Rendall) from trying to kill himself. First-time screenwriter Gustin Nash and second-time director Jon Poll create their share of tasty comic bits like a breathlessly funny montage early on, when Charlie reacts badly to his psychiatrist-prescribed Ritalin. However, the filmmakers also invent a whole gallery of supporting characters with their own issues, carefully shaded in by the actors. Hilton gives a hilariously delicate performance as the bully (“I played Linus in my fifth-grade production of You’re a Good Man, Charlie Brown, and I was good!”), while Hope Davis provides some loopy fun as Charlie’s medicated mom, who grasps how hopeless she is as a parent but is too blissed out on Klonopil to do much about it.

Hairier stuff emerges during Charlie’s run-ins with the smart, ineffectual, hard-drinking Principal Gardner (a dry, self-loathing Robert Downey Jr.), especially when Charlie starts to date Gardner’s daughter, Susan (newcomer Kat Dennings, hiding despair and weariness behind her perky façade). The movie’s early comic hijinks give way to seriousness as Charlie and the principal force each other to see their own limitations clearly. The narrative energy flags just a bit during the last 20 minutes or so, and even Charlie accidentally touching off a small riot among his fellow students can’t remedy that. Juno was able to shift gears without losing any momentum, and though the difference between these two movies is small, it’s what separates a great movie from a good one.

Still, that leaves Charlie Bartlett as the good movie, and as gratifying as it is to see another teen flick that doesn’t try to look like an episode of The O.C., it’s even nicer to see one about a guy who isn’t maladjusted and sex-obsessed but rather intellectual, well-spoken, mischievous, and someone who seeks out popularity because he’s a bit needy. Had this movie come out last summer as planned, it’d be in the discussion about 2007’s best comedies, though maybe it’s easier to appreciate now as one of the better ones of the new year.