So we’re all in love with Amy Adams now. And why not? She’s lovable. 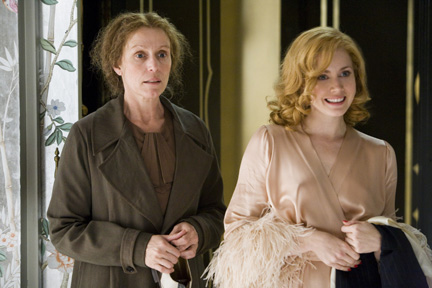 Her newly attained stardom is probably the main reason that her latest film, Miss Pettigrew Lives for a Day, is playing outside art houses. This British-made period piece won’t appeal to the popcorn crowds, and its natural audience is probably limited to Anglophiles who are nostalgic for the Edwardian era – you know, people who download Ivor Novello songs to their iPods and wonder why Jessie Matthews’ films aren’t out on DVD. This movie will be catnip to them. For everyone else who went to the cineplex recently and found Amy Adams enchanting, well, they’ll be rewarded too, with her star power filling out another role in satisfying fashion.

Frances McDormand portrays Guinevere Pettigrew, a British governess in pre-World War II London who’s so bad at her chosen profession that she keeps getting fired, and her employment agency has told her to piss off. Homeless and reduced to eating at soup kitchens, Miss Pettigrew filches a lead from the agency and reports to the apartment of Delysia LaFosse (Adams), an American nightclub singer and aspiring actress with designs on conquering the West End first and then Hollywood. Miss Pettigrew presents herself as a social secretary and quickly makes herself indispensable by preventing Delysia’s three boyfriends from running into one another. Thus begins a frenetic and life-transforming 24-hour period for both women.

The film is based on a 1938 novel by Winifred Watson, which I wasn’t able to find a copy of. It’s easy to imagine the type, though, from the tick-tock predictability that drives the story. Of course the one guy who truly loves Delysia – Michael (Lee Pace), the pianist in her nightclub act – is the poorest of the three, though he has a plan for success. Of course Delysia LaFosse is a stage name, covering up a real name that matches her proletarian background. Of course Delysia buys a makeover and new outfit for the frumpy Miss Pettigrew. (“I’m not having my social secretary go around looking like Oliver Twist’s mom.”) Of course the made-over Miss Pettigrew catches the eye of a man who’ll make her happy, an acclaimed lingerie designer named Joe (Ciarán Hinds).

Yet for all that, this fizzy cocktail of a film carries an unexpected kick. That’s partly because director Bharat Nalluri underscores the Darwinian struggle going on in these glitzy surroundings. Miss Pettigrew comes to appreciate the way even the moneyed elite have to scratch to maintain their position, especially a marble-shelled socialite (a piercing Shirley Henderson) who wants Joe for herself and tries to strong-arm Miss Pettigrew into backing off him. The shadow of World War II looms over everything, and it lends urgency to the social maneuverings of these characters, most of whom know what’s coming.

In this context, Delysia’s bedding of two men for professional purposes – the nightclub owner who employs her (Mark Strong) and the theatrical producer who wants to cast her in the lead of his West End musical (Tom Payne) – seems less like self-interested whoring and more like the survival tactics of a woman who’s weak-willed and doesn’t know what she wants. Adams spends the film’s early stages meticulously imitating the manicured diction and rapid-fire delivery of 1930s Hollywood actresses, and she is sexy and funny in a bit when she slides back and forth on a chaise longue while wearing nothing but a fur coat. Eventually, though, she shows Delysia’s bubbliness to be a carefully maintained façade that she flips on whenever she’s in the public eye. That act drops away in a genuinely potent dramatic scene in the back of a taxicab, when Delysia lets Miss Pettigrew see the precariousness of her plush lifestyle and how inwardly terrified she is. Adams is even more empathetic and vulnerable shortly afterward, when Delysia, having spurned Michael for her shot at stardom, stands onstage at the nightclub, visibly and audibly crumbling as she sings “If I Didn’t Care.”

McDormand passes much of the film obscured by the phosphorescent light of her co-star’s charisma. She does make Miss Pettigrew a more fidgety creature than most British actresses would have rendered her, and her nervousness effectively contrasts with Adams’ self-assurance. However, she truly distinguishes herself only in the scene near the end, when Miss Pettigrew tells Delysia not to let the man she loves slip away. It’s a speech we’ve seen given by a thousand other movie characters in a thousand different circumstances, but somehow it’s particularly powerful here. Maybe that’s because it takes place with an air raid siren howling in the background and Delysia taking shelter under a piano. More likely, it’s because of McDormand’s low, calm delivery of the speech – Miss Pettigrew’s deDELETEion of her own personal heartache carries enough weight to set this girl on the right path. Miss Pettigrew Lives for a Day is a comedy, but it stands strongest during its most serious moments, and it would have done Jessie Matthews proud.