In today’s saturated music market, formula means everything. A flim-flam here or a stop-time there might be the difference between fame and obscurity. Most listeners, whether they’re aware of it or not, judge pop music by American Idol’s standards. 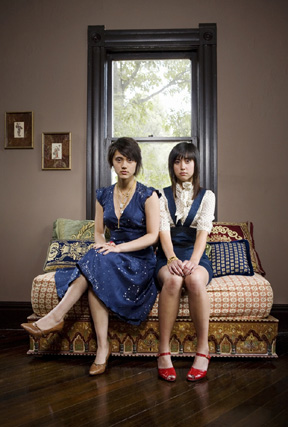 If a singer can carry a tune and look the part, she can be a hit. Enter: Meg & Dia. MySpace founder Tom Anderson personally submitted the Utah sisters into a competition sponsored by his web site, perhaps out of guilt. An unusually complicated virus had ruined their MySpace page. Perhaps due to their sudden, but not unexpected rise in popularity, Meg & Dia stress that their music is indie. As if you needed any further proof, the word’s transformation from simple adjective to business model is complete.

The singer-songwriters’ sound is pure power-pop. Concerning Something Real, the duo’s second release, a listener could replay the 12 songs a hundred times and never find one unique bit of artistry. There are no flashy solos or intricate time signatures. No conundrums to pique an active listener’s ear. Just … blah. Dia Frampton, the younger sister, sings lead and is the main songwriter. Her vocal range and power are impressive, but her schoolgirl lamentations fall flat. On rhythm guitar, Meg is aggressive and tight. The women here are backed by drummer Nick Price, bassist Jonathan Snyder, and guitarist Carlo Giminez, whom the sisters recruited, appropriately, via the internet after their debut, 2005’s primarily acoustic Our Home is Gone. Musically speaking, all of the players can handle their instruments, but who really cares when every element on Something Real sounds as if it was copied straight from the radio? Now that Meg & Dia call “indie” label Warner Bros. home – ha! Warner Bros.! “indie”! – they’ve been polished to a fine, almost translucent sheen, making them listenable but eminently forgettable. – Caroline Collier