Influenced by Patti Smith, Nirvana, The Clash, Neil Young, John Prine, Johnny Cash, his factory-worker father, and coal-miner and farmer grandparents, Jefferson Pepper spent two years in his home in the Conewago Mountains (Southern Pennsylvania), writing and recording these songs of America seen through the eyes of working people rather than politicians, noting that the two versions don’t always match. 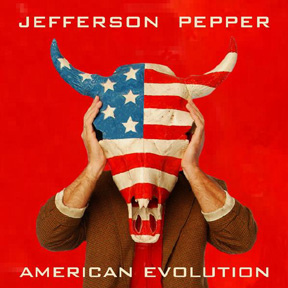 The (red) after the title is to separate this 17-song CD from two more due for release on April 1 (white) and June 10 (blue), making up an ambitious three-disc, 50-song set of what Pepper calls “500 years of cultural evolution.” Spanning the centuries from pre-Columbian America to 1940, the “red” record, he says, is “one alternative-Americana-contemporary folk-roots, rock-alt. country-cowpunk masterpiece.”

Pepper, whose minor abrasion of a voice begins to wear well after a couple of listens, debuted in 2005 with Christmas in Fallujah, an album that included a punk version of Woody Guthrie’s anthem “This Land is Your Land.” Pepper is a competent musician – he sings lead and harmony vocals and plays acoustic and electric guitars, electric bass, mandolin, harmonica, keyboards, and percussion. He obviously thinks seriously about and marvels at the monkey business of this American legacy/reality stuff. His understanding of a wide variety of music genres and subgenres make him as much of a patriot as his opinions. Whether the series will be an actual masterpiece or not, the first CD is at least – not to damn it with faint praise – interesting, sincere, and listenable. I look forward to hearing Pepper’s perspective on the rest. – Tom Geddie