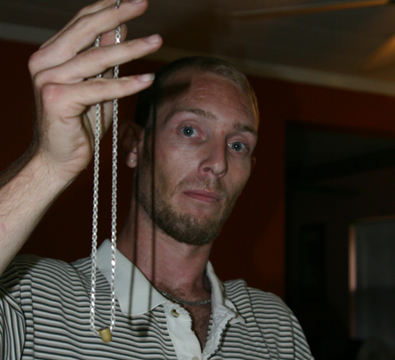 He acts fearless for someone whose body was shredded by gunfire last month, including two 9mm slugs that landed in his chest. His left hand is paralyzed, perhaps permanently, from a bullet he took in the arm, and he limps because of another that tore through his hip. The attack rendered the 28-year-old Fort Worth man hobbled, unable to work, strapped for cash, and emaciated, but, like a character in an Elmore Leonard novel, Taylor’s bravado grows in the face of turbulence.  “I haven’t gave a shit for a long time,” he said, explaining why he didn’t back down when a man pointed a gun at him and his best friend on April 6 in East Fort Worth.

While Taylor hasn’t necessarily gone looking for trouble, he’s made it clear since the age of 16 – when he punched out his father and left home – that violence is part of his makeup. He’s spent time in jail repeatedly on assault charges, mostly for domestic battles with his longtime girlfriend. Still, his life is relatively stable. He’s had the same job for a decade. He’s loyal. His brothers, sisters, and parents love him and describe him as sweet (his father is local singer-songwriter James Michael Taylor). Nobody doubts River’s courage. His best friend, Eric Griffin, owes him his life.

But he’s also poor, hardened, living in a rough neighborhood, and branded by the cops as trouble. The shooting has been ignored. The news media didn’t report it and the police are doing little to investigate it, even though the shooter is still around and possibly a threat to others. Griffin and Taylor describe the attack as an armed robbery attempt by a 21-year-old acquaintance named Tommy and a stranger they know as Billy the Kid. Griffin was trying to sell his motorcycle, and Tommy said he knew a guy who was interested. They all arranged to meet at Griffin’s house. Tommy was no stranger – he’d crashed on Griffin’s couch numerous times in the past.

On April 6, Tommy sent text messages to Griffin saying he would bring the potential buyer to the house that afternoon. They never showed. Hours later, Tommy text-messaged again, saying they were on the way. It was late – after 2 a.m. – but Griffin grudgingly agreed. It was Saturday, and he’d been drinking beer and watching videos most of the evening. Meanwhile, Taylor had clocked off work and stopped by his friend’s house for a late-night beer. Another hour passed before Tommy knocked on the door. With him was a guy wearing a white headband and black jacket. After cursory introductions, Taylor and Griffin sat on one couch, Tommy and Billy on another. Billy offered $3,200 for the motorcycle. Griffin stuck with his $3,600 asking price.

Billy then pulled a pistol and shouted “Don’t move!” Griffin said. Griffin froze, but Taylor jumped to his feet and went for the gunman, and they began wrestling. Taylor recalled the gun being fired several times while they grappled for control. “It was all ringing in my head,” he said. Griffin ran out the front door to call for police but realized he’d left his cell phone in the house. He heard his back door being flung open and someone running. Then he heard Taylor calling his name. Griffin went back into the house and found his blood-covered buddy alive and calm. He asked Griffin to wrap his arm to stop the bleeding.

Griffin noticed two holes in his friend’s shirt. “I lifted it up and saw two holes in his chest,” Griffin said. “I guess I was running on adrenalin, because I didn’t feel a thing,” Taylor said. By the time the ambulance came, Taylor was cold, clammy, feeling numbness in his fingers, and his vision was blurred. Police arrived, gathered evidence, and took Griffin’s statement. The next week, Griffin tried to call Fort Worth Police Detective T.J. Saye, who was assigned to the case. Griffin said he finally got a return call from Saye after two weeks and a dozen messages, and the veteran cop wasn’t friendly. They met at the police station, and Saye dubbed him a liar when some of Griffin’s recollections contradicted the statement he made on the night of the shooting. Griffin tried to explain that he was confused and in shock on the night he gave his first statement, but Saye wasn’t buying it.

“I’m investigating it as a shooting that I don’t know what happened, and I don’t necessarily believe my victims,” the detective told Fort Worth Weekly. “What they’re telling me doesn’t add up.” Saye doubts anyone would be selling a motorcycle at 3 a.m. and suspects the shooting was a drug deal gone sour. Griffin is low-key and soft-spoken. He kept his mouth shut at the police station, even after Saye called him a “fucking liar” in front of his daughter, he said.  After Taylor got out of the hospital, he went by the police department to give a statement, and he and Saye clashed as well. Taylor said Saye wouldn’t listen to any explanation that didn’t fit his preconceived assumption that it was a drug deal. Saye said Taylor was a hothead who refused to answer questions and stormed out of the police station without completing a statement. He also said Taylor and Griffin are withholding information – 13 shell casings from three different weapons were found inside the house, he said.

“I can’t pursue a case when I don’t know the true circumstances,” Saye said. When asked about the shell casings, Taylor refused to comment. The attack was unprovoked, the guy who tried to murder him is still running loose, and police have been told where to find the men – end of story, he said. “We practically did his job for him,” Taylor said. Three weeks ago, Griffin provided police with Tommy’s full name, date of birth, address, and phone number. He also provided the shooter’s street name and deDELETEion. Neither has been arrested. Griffin fears they’ll return and kill him, and he’s afraid to let his 1-year-old daughter stay at his house anymore. He and Taylor say police don’t care, and they might be right.

The case is under investigation but it’s “not a high priority for me,” Saye said. Saye described all four men as having drug arrests, but neither Taylor nor Griffin has drug convictions. Taylor was last arrested for drug possession as a teenager 11 years ago, but that case was dismissed. Griffin had a brain tumor removed in 1996 and said he hasn’t used drugs since.
“If this were over drugs, I wouldn’t be here trying to tell the police how to catch the guys,” Griffin said. So Griffin and Taylor sat down with the Weekly to tell their story and try to encourage police to make arrests. Griffin has kept the text messages between him and Tommy on April 6, with references to the Honda CBR 600 motorcycle. To prove a point, Taylor picked up his cell phone and dialed Tommy’s land line.

“Hello,” came the voice on the other end.  “That’s him,” Griffin whispered excitedly. “That’s Tommy.” Taylor played it cool. “Hey, Tommy.” “Who’s this,” came the reply. “It’s Billy.” “Yeah, what’s up?” Taylor hung up the phone. “See, that’s Tommy right there, and he’s obviously still talking to Billy,” he said. “How fucked up is that? We’ve given police his address, phone number, and birthday.” Saye said he has called the number. “I’ve left messages, and none of them have been returned,” he said.

But the detective hadn’t visited the suspect’s house. He cast blame on Taylor for the lack of progress on the case.
“If the guy that got shot isn’t willing to cooperate with the police department, what am I supposed to do?” he said.
Taylor said he won’t cooperate if it means being forced to admit to a drug deal that never was. Besides, he said, “If I’d been shot dead that night, I couldn’t have given a statement, so what difference does it make if I give a statement?” After all, he’s a tough guy. Upset after waiting 12 hours at the John Peter Smith hospital recently without ever being able to see a doctor, he asked a friend to remove the post-surgery staples from his hip. He had the same friend use a blade to cut a remaining 9mm slug, which had worked its way to just beneath the skin of his shoulder.

Griffin takes a softer stance. He grew pale just listening to the short phone conversation between Taylor and Tommy. “I’m sick to my stomach,” he said after Taylor hung up. And he broke down crying as he recalled how one of the bullets had pierced a wall and struck the pillow where his daughter sleeps when she comes for visits. “I can’t even talk about it,” he said, pausing for a full minute to regain his composure. “I’m just thankful she wasn’t here. I just know these people need to be arrested.”