While so much buzz has been building for that movie opening this week about the Cosmo- and stiletto heel-loving ladies from New York, The Strangers also has generated its own modest share of chatter, thanks to a genuinely creepy trailer that has been playing in theaters for the past few months. 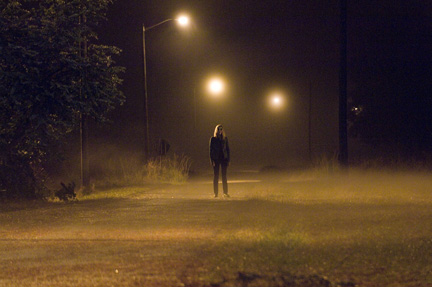 The excerpts are every bit as creepy in the finished film, and though the movie as a whole (by first-time writer-director Bryan Bertino) isn’t as wildly memorable as the best recent horror flicks, it’s still one of the better ones you’ll see in theaters. The film starts with a title card giving statistics on violent crime and stating that the story is based on true events that supposedly happened in February 2005. I can’t find any evidence that this is accurate. What is the point of maintaining something like this? A vérité horror flick like The Blair Witch Project or Cloverfield does give the audience an extra charge by keeping up the pretense that it’s showing something that actually happened. This movie isn’t vérité, and if Bertino is trying to make some sort of comment on the fictional nature of movies, the Coen brothers beat him to it when they claimed that Fargo was based on a true story. It was cute a decade ago. It’s just derivative now.

That’s a relatively small sticking point, though. The rest of the movie takes up the story of James and Kristen (Scott Speedman and Liv Tyler), a couple stuck together at his father’s secluded vacation home. What was supposed to be a romantic getaway has curdled, as flashbacks show us her turning down his proposal of marriage shortly before the trip. James is already making plans to get away from the getaway when they arrive at the house late at night. However, shortly after four in the morning, a young woman knocks on the door and asks for “Tamara.” She leaves quietly, but soon she returns with another woman and a man, all wearing masks and wielding sharp instruments, and a bloody ordeal ensues for the couple now trapped in the house.

This film belongs to a tradition of home-invasion thrillers stretching at least as far back as 1955’s The Desperate Hours, and while it doesn’t have the visual virtuosity of David Fincher’s Panic Room or the deconstructive bent of Michael Haneke’s Funny Games (either version), it’s a huge improvement over loathsome recent entries like Firewall or Hostage. That’s because Bertino knows how to use a light touch. The masked man’s first appearance will suck the breath right out of you: As Kristen stands nonchalantly in her kitchen, he silently shows up in the entranceway deep in the shot’s background and watches her smoke a cigarette and fix herself a drink. Later James and Kristen discover the word “HELLO” scrawled repeatedly on the inside of their bedroom window, and the cheekiness of the sentiment is scarier than any threatening message would have been.

Bertino’s unmistakable skill with subtle details like these extends to the soundtrack. Most horror movies not only look alike but also sound alike; we hear the same stretches of dead silence followed by a loud musical chord (known in the film industry as a “stinger”) when the killer jumps into the frame. This one creates an effective scare with a soft female voice on the other side of the door, followed by knocking that grows gradually louder. The killers frequently announce their presence through low scraping or tapping noises inside the house, and after Kristen idly plinks out four notes on an upright piano near the film’s beginning, it’s chilling when she hears someone else play those same four notes near the end. The only other filmmaker who pays such close attention to sound when he creates horror is M. Night Shyamalan, and Bertino does well to imitate him.

That said, The Strangers does turn underwhelming when it finally starts to show its cards. Frightening as they are at first, the three masked killers eventually turn out to be rather ordinary faceless slashers. The part of the film in which James and Kristen’s friend (Glenn Howerton) decides to drop by the house is clumsily handled. Bertino’s attempt to integrate fully drawn characters into this story is admirable, but Nimród Antal’s underappreciated Vacancy from last year did a better job of it. Tyler and Speedman’s soft, edgeless presences don’t give the film much sticking power, though these 30-ish actors impart the illusion of more weight than most slasher flicks, which are largely populated by actors in their 20s. What the movie boils down to is something you probably already know: Answering your door to a stranger at 4 a.m. is a pretty bad idea. Then again, this promising new filmmaker’s talent does give this old story a few new jolts.