Austin’s Urgencies kicks out straight-ahead rock ‘n’ roll. Enthusiastic and a tad angsty, the foursome conveys a sense of constantly expiring time here on their first official album, Manifesto. Punk and pounding, all 10 tracks race along. 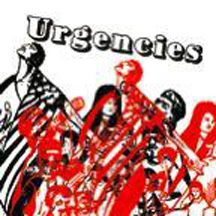 Singer Al G has one of those cigarette-scarred, tired-yet-hopeful demeanors on the mic. He offers broad social commentary with anarchic tendencies. “There are toxins in my blood, evil in my eyes,” he convincingly proclaims on the final track, “What Doesn’t Kill Me.” The modifier “dirty” summarizes the way he addresses listeners, shoveling his versions of societal truths into listeners’ eardrums via tidbits of personal experience.

The players are tight, particularly drummer Pat E Cakes, who fills and rolls, keeping the energy sky-high throughout. In “My Excuse,” he manages a taut, fast drum roll for a good half-minute, taking the pressure off the other musicians (though no doubt adding pressure to his forearms). The drummer thrashes and kicks the way a fairytale ogre might approach the skins. His hammering augments the severity of the band’s vibe.

Bassist Maria de la Fantasy does her fair share of providing the low-end thunder and never lets up through what is a storm of a disc. Between her and the drummer, the two guitarists have to crank up to 11 to be heard. Guitarist Sancho de la Fantasy (a relation of Maria’s?) ties up the punk tunes with not-heavily distorted soloing, lending complexity and musicality to what would otherwise be typical hard rock.

The title track is a good summation of the Urgencies’ urgency. “The broken sounds of a shattered past … / So we dance, and we sing, we fuck, we drink.” Even if the Urgencies aren’t bringing anything “new” to music, they do make a point: Revolution doesn’t happen overnight.  – Caroline Collier