The expression “Pffft,” under the scrutiny of a Google search, reveals several meanings, including “The sound you make when someone says something really stupid” and “A whole lot of hot air.” 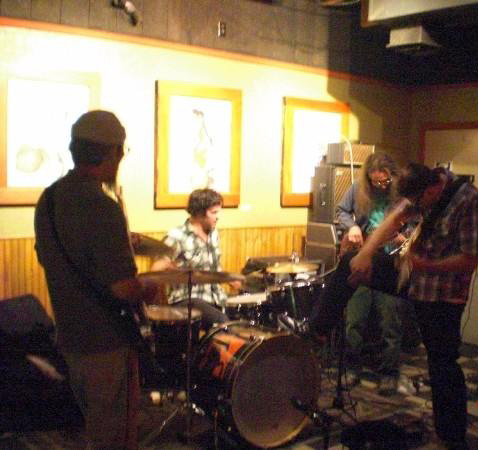 Not really what the new improv band PFFFFT! represents. However, the name, which is appropriately self-deprecating, does apply to the band’s outlook on musical organization. “We intentionally did not discuss what we might try to do,” said bassist Matt Hembree. “It was show up, set up, and go.”

Free-associative music is pretty much old hat for the PFFFFT! guys. Drummer Clay Stinnett and multi-instrumentalist Tony Chapman spent several years in the now-defunct outré outfit Ghostcar. Guitarist Ken Shimamoto honed his improv chops on blues stages all around and, up until about a year ago, at the recently shuttered Wreck Room as a regular participant in weekly jams called Impulse of Will. Several months ago, the three convened under the name Kamandi but for one night only. Pleased with the results, the trio picked up Hembree (Goodwin, Pablo and the Hemphill 7, Stoogeaphilia, Protect and Swerve, The Underground Railroad), and began gigging regularly as PFFFFT!

“Learning to communicate with new musicians is part of the reason I play music,” Hembree said. “If I still played the first 20 songs I learned, I’d be done. “Some bands work out a skeleton, then embellish,” he continued, “But the four of us don’t even want that much organization.” Hembree, in fact, never met Stinnett and Chapman until he took the stage for PFFFFT!’s premiere show, at the Chat Room Pub, in April. “There were new ideas I hadn’t heard,” Hembree said. “It was an exciting and awesome feeling.”

The band also has a fifth member of sorts, former Ghostcar trumpeter Karl Poetschke, whom Hembree calls PFFFFT!’s “long-distance guru” – Poetschke now lives in Alaska, leading wilderness excursions. The band incorporates his ideas via a continuing series of essays of his on the art of musical improvisation, online at Shimamoto’s blog, www.stashdauber.blogspot.com.

Communication among the musicians onstage is key, almost as much as communication between the musicians and the room’s vibe. At times during some PFFFFT! shows – there have been three so far, all at the Chat Room – people in the crowd have shouted out types of rhythms for Stinnett to play or made unintentional noises that the musicians picked up on and incorporated into specific passages.

Hembree records all of PFFFFT!’s material. His equipment is crude yet results in some amazingly clean work. (Listen online at www.myspace.com/pfffftimprov.) He cuts the band’s monolithic music into individual tracks based on what he hears as natural stops and starts. The song titles – “Chaoseptic,” “Birds Landing on an Electric Fence,” “Pressure Definitely Drops on All of Us” – come to Hembree almost as spontaneously as rhythms or melodies. “Things suggest themselves for names,” he said, “usually based on bits and pieces of other songs, other pieces of music, things I’ve seen lately on TV or the interweb, and there it goes.”

Although PFFFFT! defies easy classification, each band member has a signature style: Stinnett pounds out loud, driving melodies, Chapman creeps around the edges, framing, illuminating, and sometimes damping progressions, and Hembree and Shimamoto lean toward the rocking end of the spectrum. The music can be polarizing. “If you hate it, good,” Hembree said. “You won’t ever have to hear it again, and if you love it, too bad.”