Jennifer Alonsa is looking forward to doing a little hitting. The 30-year-old probation officer for Tarrant County, who is built like a linebacker, admits to having a bit of a mean streak. 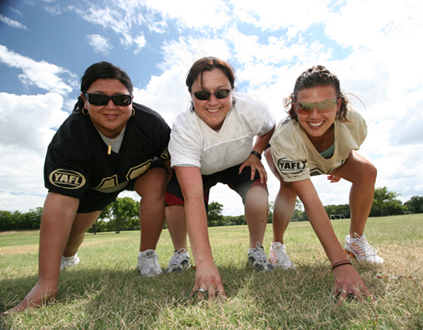 Patti Ramos, on the other hand, said that she doesn’t have a mean bone in her body. But the 33-year-old patient services community manager for the American Cancer Society has been wanting to play football ever since the coaches stopped her from trying out for her junior high school’s team. She’s perfectly willing to trade her earrings for a helmet and her work dress for shoulder pads and go head to head with the other women of the National Women’s Football Association.

The league, started eight years ago with only two teams, has expanded to 46 teams around the country for the 2009 season. Alonsa and Ramos are two of the first women to make the NWFA’s newest roster, the Lone Star Mustangs, based in Fort Worth. And this isn’t intramural flag football, either – it’s the full-contact, full pads and helmets, tackle-and-maim style of play, the kind that looks familiar to Texans, most of whom have little footballs wired into their DNA.

The Mustangs’ fourth and final tryout is on Aug. 2. They won’t begin playing actual games until March 2009. By then, owners LynMarie Liberty-Ellington and Mike Ellington, who also coaches the team, hope to have a roster of around 50 women. The couple got interested in starting an NWFA team after they read about the league online. Liberty-Ellington said that she was particularly impressed with the organization’s growth rate – it’s the fastest growing professional women’s sports group in the country, according to the league’s web site. She and her husband owned a couple of small businesses in Colorado but sold them when Ellington’s job was relocated to Dallas. They jumped at the chance to start another business that just happens to involve a sport that they love. Mike has coached football at the youth level for six years and played college football at the University of New Mexico under former Texas Christian University and Texas A&M coach Dennis Francione. LynMarie has been active in youth football as a parent and cheerleading coach.

“So far we’ve gotten a great response. Everyone that we’ve talked to has been surprised. A lot of them didn’t know that there is women’s football, especially full-contact and professional,” said Liberty-Ellington. “As soon as we start talking about it, they want to know about the team and the league. I haven’t had one negative response.” As with any small startup business, the biggest obstacle for the Mustangs is money. Right now, Liberty-Ellington is busy trying to recruit sponsors and find a field for practicing and playing games. The players, coaches, vendors, trainers, and ticket-takers are all volunteers, for now. The players have to purchase their own equipment and uniforms. And Ellington has kept the job that landed him in North Texas, as a manager at a local concrete company.

A unique challenge for Coach Ellington is that most of the women trying out for the team have little to no contact football experience. Most have played organized sports in the past, and a few have played for other NWFA teams, he said, but football was the last major sport that women were encouraged to play. He believes that he and his coaches can adapt other team-sport skills to football.  “I’m looking for athletic ability and a desire to play football,” he said. “There are very few players, if any, that have good on-the-field experience. They may have good football knowledge from watching games but lack the experience to jump on the field right away. “Even with the players who have had experience, we’re starting from the ground up and working on their football skills,” he said. “We’re treating it like youth football, working on the basic fundamentals, but still treating them like adults.”

The time commitment for the players and coaches will be considerable. Liberty-Ellington said that once the team has been chosen, there will be two or three practices a week. Coaches will also meet weekly to review practice and game films, in addition to scouting opponents. Those involved seem to consider all that effort a small price to pay for being a part of something unique. Most players in the NWFA are in their early to mid-30s. Most have full-time jobs, families, and other restrictions on their time. Ramos, who made the team in the first tryout, is typical. She’s 33, into her career, and lucky enough to have a flexible work schedule and supportive bosses. She has never played football at any level, though she has played organized volleyball and softball.

The youngest person on the team so far is 23-year-old Anna Thornton, a student at the University of North Texas. She has played flag football in the past and played soccer throughout high school. She also is a life-long football fan and believes that she understands the game better than most.

“I was raised a Cowboys fan, so I know football pretty well,” she said. “I haven’t played at the professional level before, but I can run drills, and I can read playbooks.” Ellington said that the players will use tackling dummies and go through a variety of other drills to prepare them for the contact, but he admits that some women may not be able to handle it well.  In addition to learning a new, violent sport, the women also carry the burden of being pioneers at a pretty significant moment in sports history, causing some people, especially men, to do double-takes.

Ramos said that her brother-in-law questioned her decision to join the team.

“He didn’t know what kind of a message that would send to my niece,” she said – implying that she would be less feminine and therefore less of a female role model if she played.  Alonsa, on the other hand, has received nothing but support from her family – and all of the people interviewed by Fort Worth Weekly said that the reaction to women’s football has been overwhelmingly positive, if not unanimous.  “My cousin is getting a jersey made with my name on it,” Alonsa said. “She said that she’s my biggest fan.” Everyone involved in Mustang football understands that there will be obstacles. But, as Thornton pointed out, it’s a sport that plenty of women love, and, after four generations, are finally being encouraged to pursue.

“I think that there are some pretty tough women out there,” said Thornton, whom Ellington described as being one of the fastest players in the league. “I’m not saying that we should play with men – it’s a different sport. If we can play it, we should be allowed to. I think we’re breaking ground, and I hope that it catches on and becomes really big. We might not hit as hard [as a man], but we can still play.”