The Oscar-nominated 2006 film Jesus Camp may have been a documentary, but it played more like a horror movie to non-religious people and to liberal believers. 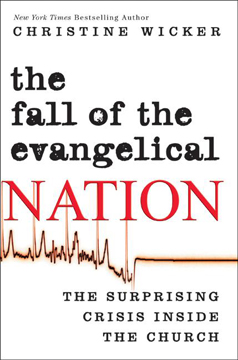 The film featured a fierce parade of evangelical adults training their children during a summer camp to “take back our Christian nation for Christ.” Their goals included: recriminalize abortion and homosexuality, kick evolution out of the classroom and replace it with Christian prayer, declare war on Islam, and, well, you know the rest.

The Jesus Camp filmmakers included an ominous statistic that has been repeated countless times by the mass media since the 2004 U.S. presidential election: About 25 percent of Americans identify themselves as evangelicals.  But as author Christine Wicker forcefully argues in her book, The Fall of the Evangelical Nation: The Surprising Crisis Within the Church, almost everything you’ve learned about the religious right is wrong. Wicker’s contentions are backed up by a combination of raw data, convincing analysis, and on-the-street reportage. She insists that politically committed, hard-right evangelicals make up, at best, only about 6 percent of the general population. And evangelical churches are steadily losing members, not adding them. In the book, these two claims are meticulously deduced from internal polling as well as organizational and church attendance figures provided by the institutions themselves.

Of course, public perception can be power, and in tight state and national races, 6 percent can still be an important factor. But the author suggests that – contrary to the media’s running plot about a national huge-tent revival of that ol’ time religion – conservative evangelicals are hardly the key demographic that everyone must kowtow to before gaining office. (John McCain is proving that as we speak.) Countless interviews with disillusioned former members of the fold have led Wicker to another conclusion: America is not growing more religious per se, it’s simply adopting a more personalized, nondenominational faith a la the old cliché “I’m not religious but very spiritual.”

Wicker spent 17 years as a feature writer and religion reporter for the Dallas Morning News, and although she now lives in Pasadena, Calif., The Fall of the Evangelical Nation is packed with personalities and stories from the North Central Texas area. She herself is an ex-evangelical – best labeled as an agnostic now – but anyone looking for a vicious trouncing of evangelical sins will be disappointed. Wicker is gallant in her efforts to defend what she claims is the moderate majority against popular caricatures, although she fails to acknowledge that their own leaders have created much of the lousy P.R. At the same time, she methodically details how the movement’s size, power, and influence have been greatly exaggerated by political operatives and a credulous media.

The Fall of the Evangelical Nation feels like several non-fiction genres crammed into a slim 200 pages: social science critique, interview profile, autobiography, cultural essay. This amalgam quality is the book’s biggest strength and most notable weakness: The unpredictable angles taken by Wicker keep the pages turning, but before the end, you realize the book is sloppily organized, sometimes unfocused, and isn’t entirely sure what it wants to achieve. The anecdotal portions of the book – tales of how the evangelical gospel affected people in different ways – are vivid. Wicker follows the Tauzin family back to New Orleans to survey their destroyed home for the first time post-Katrina. After the hurricane, the Tauzins were relocated to Rockwall, where the Lake Pointe mega-church provided them with food, money, shelter, and Christian-based counseling. The family enthusiastically converted from lapsed Catholics to proselytizing Baptists. The scene where the wife, Michelle, tearfully attempts to initiate prayer with polite but clearly uncomfortable neighbors amid the wreckage of their former Louisiana lives is poignant.

Conversely, Wicker chronicles a Baylor graduate who was raised a devout Baptist and married an equally fervent worshipper. Years into the relationship, she stumbled onto her husband in a passionate embrace with another man: a Baptist preacher, in fact. Though it naturally knocked her for a loop, the discovery led her in a surprising direction. While grieving, she came to the conclusion that their shared faith had encouraged her husband to live a false life. She, in turn, began to seriously entertain her own doubts about the church. She ended her marriage and, although still very much a Christian, defected from the evangelical fold: Her own set of values would no longer be shaped unquestioningly by any church doctrine.

Wicker’s prose style is crystalline and assertive, and she has an enviable ability to draw shrewd observations from hard stats and sweeping trends. In her cultural analysis, she notes that the globalizing effects of the internet have made various faiths more familiar to U.S. evangelicals – and gradually, for any Baptist or Pentecostal with a conscience, it has become harder to damn those “outsiders” to hell because they don’t seem quite so “outside” anymore. Also, Wicker declares that the ubiquity of the 12-step AA philosophy in our Oprah-ruled society makes God a presence that’s more accessible and less institutional, because it’s God “as we understand him,” not as the naysaying televangelist explains him.

For all of her insight, Wicker spills a lot of ink refusing to take a strong position in any direction, which makes The Fall of the Evangelical Nation feel a little squirrelly. But one of her main points rings as loudly as a tornado siren: Republican “values voters” hold no political monopoly on American values – not by a long shot.

The Fall of the Evangelical Nation:
The Surprising Crisis Inside the Church,
by Christine Wicker
HarperCollins. 221 pps.