Three years ago Woody Allen left New York for London and made his first good movie in a decade, Match Point. 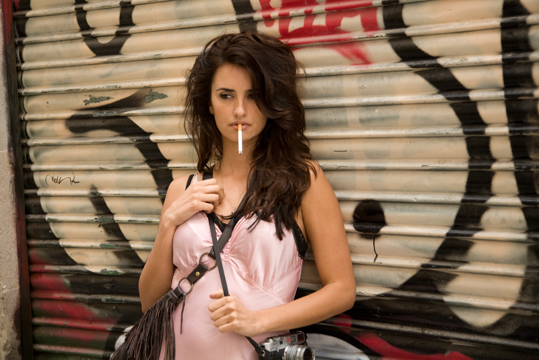 He promptly went stale again, though, so now he has shifted his base camp again for his latest movie. Vicky Cristina Barcelona turns out to be not just his best effort since Match Point but his most purely enjoyable comedy since the turn of the century. Changing cities seems to suit Woody; perhaps someone should scrape together enough cash to keep him moving around. If the results of the Woody Allen World Tour are as much fun as Vicky Cristina Barcelona, the money will be well spent.

The women in the title are American friends spending the summer in Spain. Vicky (Rebecca Hall) is a straitlaced academic studying Catalan culture and engaged to a solid but uninspiring preppy New Yorker (Chris Messina). Cristina (Scarlett Johansson) is a wannabe artist who accompanies Vicky to Barcelona to flee a broken love affair and find some direction in life. Their sojourn takes a turn when a successful painter named Juan Antonio (Javier Bardem) approaches their table at a restaurant and propositions them both sexually. This movie could have fallen apart right here. With a great many actors in the role of Juan Antonio, it probably would have. However, Bardem gives the part an engaging reflective side, doesn’t project any off-putting self-satisfaction, and makes this womanizer into a complicated and not unsympathetic character. This actor hasn’t had many chances to show off his roguish charm, but he unleashes all he has here, and it’s quite a sight to see.

The plot takes off on parallel tracks. Rampantly unimpressed by Juan Antonio’s initial overture, Vicky winds up having sex with him anyway after he takes her on a Cristina-less night filled with Spanish wine and guitar music. Though the two of them vow not to repeat the encounter, she spends the rest of the movie fretting over whether she should break off her engagement. This is well played by Hall, a slender, sad-eyed British brunette who contrasts nicely with the zaftig, rosy-cheeked blonde Johansson. Patricia Clarkson injects some life too as an older friend who misguidedly tells Vicky to follow her heart, but this half of the movie is still nowhere near as interesting as Cristina’s half.

Cristina plunges into simultaneous, open affairs with both Juan Antonio and María Elena (Penélope Cruz), his violent and mentally unstable ex-wife who moves back in with him after trying to kill herself. Contrary to the internet rumors, there’s no onscreen sex between the two women, just an intense wordless bit where María Elena seduces Cristina in a photography darkroom. The scene is typical of Allen’s treatment of this bisexual fling: casual, unfussy, neither prim nor leeringly voyeuristic. The dynamics of this three-way relationship are new territory for him, and he makes this convoluted situation feel real. Given that gay people, historically speaking, have been even harder to find in Woody Allen movies than black people, it’s a notable achievement. (Though truth be told, I could have stood a little more voyeurism from him on this point.)

After making a mistake by casting Johansson as a plucky detective heroine in his leaden 2006 comedy Scoop, Allen goes back to using her as a sexual sparkplug, and the crackling erotic tension between her, Bardem, and Cruz drives the movie. For her part, Cruz is stuck in a role familiar from previous Allen films – the self-destructive sexual dynamo of a woman who fascinates and horrifies men – but she gives a performance full of fury and makes what could have been a shopworn cliché come alive. All this plays out against a series of magnificent backdrops provided by the city of Barcelona, and the Catalan capital and cultural mecca looks even yummier than the movie’s stars. Spain has no shortage of talented filmmakers, yet none of them has made this city as appealing as Allen and his cinematographer Javier Aguirresarobe. They give us besotted looks at Gaudí’s architecture and find a breathtaking spot in Parc Güell to film a breakup scene between Juan Antonio and Vicky. It’s a perfectly legitimate reason to see a movie just because it’s a great travelogue, and this one will make you want to hop the next flight to Spain.

The film boasts a few elements of pure farce, like Cristina’s case of food poisoning just before she’s about to bed Juan Antonio or María Elena stalking her ex with a gun. These stand out because the rest of the is so straightforward. This isn’t a laughfest on the order of Tropic Thunder (see review below) or Pineapple Express, but it has a genuine lightness and buoyancy that has been sorely missing from Allen’s films. The movie’s ambiguous ending, with Vicky and Cristina ending up pretty much where they started, could easily seem like a cop-out, but instead it feels just right. In the heat of this scorching summer, Vicky Cristina Barcelona goes down like a sweet, icy glass of sangria.