Parking – and ego – could trump Westsiders’ attachment to the lawn beside the Kimbell.

Several weeks ago, the Frisbee players and sun-worshippers and dog-walkers who normally take advantage of the big lawn just west of the Kimbell Art Museum found their routines interrupted by two drilling rigs that, over three or four days, were moved around to make several 6-inch-diameter holes in the popular Westside greenspace. 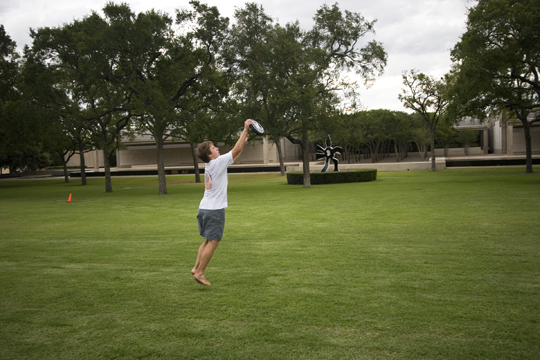 Were the crews drilling for gas mere yards away from priceless art? Naah. The smallish rigs were taking core soil samples, to help museum officials decide whether to build an addition to the Kimbell on the big grassy space. The museum designated a site for the addition last year on the other side of the Kimbell, but is now weighing the possibility of putting it on the lawn instead.
The Kimbell board will make the decision on a location before the end of the year, but some are speculating the lawn is now being considered because of the big ego of the architect. Another factor that could remove another block of ever-more-scarce greenspace from the central city: the importance of automobile parking. That’s right, parking spaces over park space.
When Fort Worth Weekly asked about the drilling, the first response from the Kimbell was that the museum was studying “geothermal energy” possibilities. Later, the drilling was categorized as an “environmental assessment.” Finally, museum officials acknowledged that the big lawn might be mowed down in favor of a new building designed by acclaimed architect Renzo Piano.
Last April, the Kimbell board of directors announced an addition was being planned for the museum with the purpose of better accommodating visiting exhibits. Existing space limitations mean that much of the permanent collection must be put in storage to make room for temporary shows. The announcement said the “addition will comprise a separate building across the street from the current museum, on land acquired in 1998.” The land in question is just east of the Kimbell across Arch Adams Street. It currently holds an auditorium used by the Kimbell and, more importantly, a 100-plus-space parking lot used by patrons of both the Kimbell and the Modern Art Museum of Fort Worth.