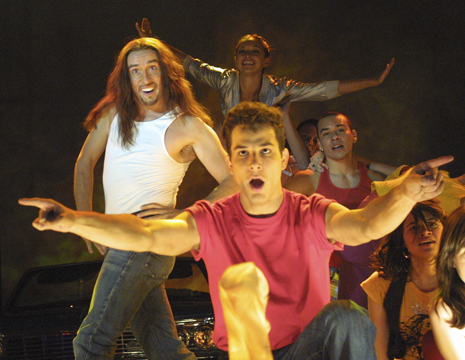 By contrast, most of his roles in American movies haven’t done him justice (Night at the Museum, the ill-starred Around the World in 80 Days), though he did blow up – literally and figuratively – in Tropic Thunder. This week he’s starring in an uneven but jaunty indie comedy called Hamlet 2 that presents our multiplex crowds with a golden chance to see this stratospherically talented comedian in full flight. Coogan plays Dana Marschz, whose last name’s pronunciation is mangled by everyone in a not-that-good running gag. Having failed as a professional actor because he’s really bad, he teaches drama to a class of two nerdy students (Skylar Astin and Phoebe Strole from Broadway’s Spring Awakening) at a high school in Tucson and puts on rinky-dink stage adaptations of Mississippi Burning and Erin Brockovich. When the latter production is eviscerated in the school newspaper, Dana cries, “I feel like I’ve been raped in the face!” and storms off to confront the paper’s 11-year-old theater critic (Shea Pepe), who nevertheless holds his ground and gives Dana constructive advice before running off to recess.

The movie’s great comic inspiration comes when the school cancels its drama program due to budget cutbacks, and Dana sets out to save the department by writing and staging a sequel to Hamlet that has more to do with his own personal demons than with Shakespeare’s original. His play resurrects Hamlet’s dead characters with a time machine operated by Jesus Christ, a role that Dana casts himself in. Oh, and the show’s a musical. No wonder it ignites a free-speech foofaraw in Tucson. Dana, though, soldiers on with the aid of a terrier-like ACLU lawyer named Cricket (a deliciously nasty Amy Poehler).

Is Dana a mad visionary artist or just an incredible dumbass? Director Andrew Fleming (from last year’s Nancy Drew) and his co-writer Pam Brady try to have it both ways. Dana has no taste – he loves every movie he’s ever seen – and when a sudden influx of 20-plus disenchanted Latino kids swells his drama class, he tries to relate to them by watching the 1995 film Dangerous Minds. Yet even though he’s a cartoon of a theater guy, we’re also supposed to take him seriously as a recovering alcoholic with daddy issues and a failing marriage. (Catherine Keener is stuck in the ill-fitting role of Dana’s horrible wife but scores some huge laughs anyway.) How does a loser like Dana get students to follow him? How does such a brainless director make Hamlet 2 a success with high-grade production values and tight choreography?

Also, what we see of the play is too tame for a supposedly controversial work, though it’d probably help if we actually saw the scene in which Satan French-kisses President Bush.
This has other parts hanging loose. The racial tension between the white and Latino students comes to nothing, and Cricket’s anti-Semitic jokes directed at her absent husband aren’t funny. The filmmakers show a better comic touch when they turn to slapstick, whether it’s a mute student (Natalie Amenula) who’s continually getting hit in the head or Dana suffering mishaps on roller-skates because he can’t afford a car. Perhaps no actor could have resolved all the issues here, but it sure is fun watching Coogan ham up the part of a guy who overacts in life as well as onstage, at various times bursting into tears, falling into a dead faint, and turning into a breathless fanboy when he meets Elisabeth Shue (playing herself as a disgruntled former actress now working as a nurse in a Tucson fertility clinic). Dana’s relentless theatricality is sometimes just too much, but Coogan finds ways to inject comic subtlety into his performance as this most unsubtle character – check his unobtrusive use of a giant splint on his middle finger during one scene with his wife. Coogan comes through in the big moments, too, delivering a virtuoso aria in a copy shop where Dana frets over the color of paper to use for his promotional flyers.

The play Hamlet 2 serves as the climax for the film Hamlet 2, and both are bailed out by the musical numbers. Set to original songs by Fleming, Brady, and Ralph Sall, they’re so much fun that these filmmakers should write an actual Broadway musical. (Elton John and Bernie Taupin’s “Someone Saved My Life” also figures prominently.) The centerpiece is “Rock Me Sexy Jesus,” and though that title sounds like it’s trying too hard to be provocative, the actual music is effortless and infectiously upbeat. The same goes for the splashy, gently swaying, lyrically filthy song over the end credits, “(You’re As) Gay As the Day Is Long.” Why, oh, why didn’t they stage a dance number to that one? Well, no matter. Any movie that can send you out of the theater singing joyously about Jesus’ having a swimmer’s bod is worth treasuring.