A downtown valet says Fort Worth police are harassing him because he’s cut them out of the towing process.

A disagreement between a valet attendant and Fort Worth police has escalated to feud status, prompting a flurry of citations, an arrest, accusations of police harassment and retaliation, and an internal police investigation. 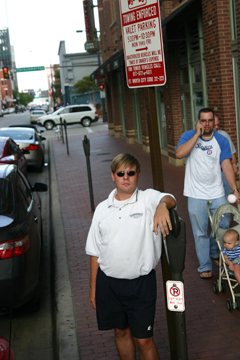 Steve Russell, who parks cars for diners at Piranha Killer Sushi, doesn’t buy the old saying about not fighting city hall. As one of his co-workers said, Russell “can be a little mouthy.” He’s short in stature but doesn’t back down when he thinks he’s right, even when his challengers wear badges and guns.
“They’re trying to intimidate me, and I guess they picked the wrong guy,” he said. “I don’t get intimidated because I haven’t done anything wrong.”
Many downtown restaurants lease on-street metered parking spaces from the city and reserve them for valet service. Piranha leases two in front of its entrance. Diners pull up and enter the restaurant while valets park their cars. The ordinance that governs valet parking operations is detailed, limiting the size of valet stands, hours of service, and the amount of time cars can remain in the spaces.
Small metal signs attached to parking meters instruct motorists not to park there between 5:30 and 10:30 p.m. – the familiar red Ghostbusters circle is added for good measure. A taller sign next to the meters lists them as tow zones. Hang around downtown for long and you’ll see delighted motorists slide their cars into the spaces, then peer through their windshields, read the signs, shake their heads in dismay, and pull out to continue the search for on-street parking.
Some folks don’t notice the signs. Or they ignore them. Valets occasionally return from parking cars in a nearby garage to find one of their leased spaces occupied by a car whose owner has walked away. Traditionally, valets call police, and police then call tow operators. But tow trucks can be slow to arrive, leaving the illegally parked cars to muck up valet operations during dinner rushes.
Earlier this summer, Russell called a tow operator directly, something he estimates he does about three or four times a month. The tow truck arrived within minutes, and Russell deemed the process more efficient than going through police.
But police didn’t like the arrangement. Russell said an officer warned him and the tow truck driver not to sidestep police again. Russell checked the city ordinance and didn’t see anything preventing him from calling wreckers directly. But police officers and their supervisors weren’t interested in his discovery, he said, and so he called Gerald Chandler, the Fort Worth Police Department’s contract compliance officer.
On May 6, Chandler e-mailed the tow truck driver to say he had discussed the situation with an assistant city attorney and determined Piranha could indeed call tow companies directly. “Please ask the police officer to contact Assistant City Attorney Monica Wood should there be any questions,” Chandler wrote.
Police still weren’t impressed, Russell said.
Three bicycle cops started making regular stops by his valet stand to hassle him during dinner rushes to disrupt his work, he said. “It’s costing me money, and I can’t do anything about it because they hide behind their badges,” Russell said.
Piranha General Manager James Johnson agreed that police are targeting Russell. “They only come on the weekends he works,” he said. “It backs up my business [to have police] talking to him while he’s trying to park cars. It’s a real hassle.”
Waitress Michele Burton recalled seeing police sift through Russell’s belongings. “He was out parking cars, and three cops just came up and started going through his valet box, picking up his keys, books, schedules, and his wallet,” she said.
Assistant General Manager Lindsey Venable said police ask for Russell by name. “If he’s not working, they come to find out when he is working, and they find something to harass him about,” she said.
Restaurant managers said customers sometimes turn around and walk away rather than come into the restaurant when police are badgering Russell out front.
“Steve’s one of the best valets we’ve ever had, a very hard worker,” Venable said.
On May 24, Russell wanted a car removed and called the private company, Tarrant County Abandoned Vehicle Removal. A tow operator arrived, hitched the car, and was removing it at about 6:30 p.m. when one of the police officers who had been clashing with Russell showed up on his bicycle and chased the truck. Russell said the tow operator was carrying a copy of Chandler’s e-mail, but police arrested him on suspicion of auto theft. He wasn’t charged.
“It was determined by Auto Theft that the city had granted permission for valet zones to be considered private property and legal for the valet companies to contract their own tows,” the officer wrote in his report.
The tow operator was released at about 10 p.m., after police cited him for not having tail lights on a towed vehicle.
They weren’t done. Fifteen minutes later, police arrived at Piranha.
Officer T.C. Dunn issued two citations to Russell – one for not having a driver’s license, even though Russell’s license was in his valet box. The officer checked “no operator’s license” on the citation, and wrote “on person” beside it.
Russell explained that valets don’t carry personal effects on them to keep from losing them in customers’ cars. Russell showed his license; police noted it was issued in Alabama. Russell said he lives in Alabama but came to Mineral Wells about six months ago to care for his ailing mother.


Dunn issued him a ticket for not changing his address on his license.
Officer C. Duer issued three citations – leaving a valet car in a loading zone for more than five minutes (Russell said the car’s owner was inside picking up a to-go order); having no valid valet permit (Russell had given his permit to the tow truck driver earlier that day to make a copy to show police); and blocking more than four feet of sidewalk with his valet stand. The citations seemed ludicrous to Russell, particularly the last one – his valet stand is 30 inches wide. He speculated that police prefer to call tow operators themselves for kickbacks.
Russell and the tow operator both have filed harassment complaints with the police department’s Internal Affairs division. (The tow operator didn’t want to be interviewed for this article, saying he preferred to wait until the investigation is complete.)
Police won’t discuss this situation with Fort Worth Weekly, citing the ongoing investigation, but they were willing to talk generally about problems with the valet situation downtown – none of which Russell has been accused of.
“I will say that valet issues continue to plague downtown residents, business owners, and public safety officials [including] … unlawful practices on the part of the valet companies such as parking their customer vehicles in spaces not authorized by the permit holder, forging and/or altering permits, and leaving vehicles unattended in lanes of traffic, all of which are violations of the valet ordinance as well as Transportation Code laws of the State of Texas,” Lt. Paul Henderson said.
Police maintain a rotation list of tow operators, he said, but he denied that officers benefit personally from making the calls for wrecker service.
“The officers themselves do not request specific tow truck operators for non-consent tows,” he said. “They only tell the dispatcher they need a tow truck.” The police communications staff, he said, “maintains a list of certified tow truck companies and assigns the next one on the active list to the call. That way there is no perception of favoritism on anyone’s part.”
On Aug. 19, Russell went before Fort Worth City Council to describe the feud and to question the city’s ordinance. The number of valet operations downtown has increased dramatically since the ordinance was written six years ago and needs to be revisited, he said.
Mayor Mike Moncrief suggested Russell meet with police Capt. Billy Cordell, who was there. Russell, Cordell, and Wood were boarding an elevator to go to a meeting room when a Weekly reporter asked to be included. Cordell refused, citing the ongoing investigation.
A few days later, Henderson told the Weekly that Russell didn’t “dispute the validity of any of the citations” during the meeting.
That’s news to Russell. He recalled describing the citations as retaliatory and undeserved. “As soon as the tow truck driver got out of jail, I had four cops over there writing me five tickets,” he said. “The captain said, ‘Don’t expect me to dismiss your tickets.’ I said, ‘Don’t worry, I’ll get these dismissed in court.’ “
Russell deemed the meeting “pointless.”
While downtown diners appreciate curbside valet service, some residents aren’t thrilled with metered spaces being leased. Last week, Russell arrived at work at 5:30 p.m. and found a car parked in the valet space. He called a tow truck, and 15 minutes later the car was hooked and hauled. Getting a car out of impound costs the vehicle owner $240.
The car’s driver, Deborah McIlroy, who had been dining nearby, was flabbergasted. She said the no-parking signs aren’t visible enough – she had parked and fed the meter without noticing, she said.
One of her passengers, Steve Key, demanded to know why Russell had towed the car. An unsmiling Russell pointed to the signs.
“You don’t have to be a prick about it,” said Key, who was pushing one of his children in a baby buggy.
“I’m not being a prick – you asked a question, and I answered you,” Russell said.
Key said putting bags over meters is a better way of letting motorists know which parking places are off-limits – perhaps something that might be considered, should the city revisit its valet ordinance.