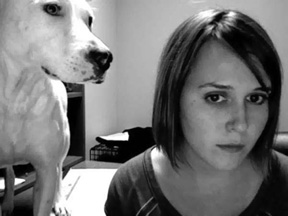 Singer-songwriter Kristina Morland remembers the first guitar her mother bought her. She was 15 years old and living in Dennis, a tiny town just southwest of Weatherford. The second-hand instrument was more than a little beaten up, difficult to tune, and even harder to play.
“I think everybody says this, but it really is best to learn to play on a crappy guitar,” said the 28-year-old musician. “You have to push yourself and the guitar. You get calluses on your fingers. Then, when you finally get a nice one, it’s like, Oh, yeah, this isn’t as hard as I thought.”
To be sure, Morland didn’t sit for hours with a beginner’s book of baby tunes, patiently learning each note of “This Land Is Your Land” or “The Yellow Rose of Texas.” She saw the acoustic guitar as a means of expression, not as an instrument to be mastered. For years, a cheap Casio keyboard had been her instrument of choice. She pecked out melodies and sang original poetry to them, making her own two- or three-track tunes on her brother’s tape recorder. When the guitar arrived, young Kristina set about to continue her songwriting: imagistic, full of tiny details about place and time, and oddly stirring.
“Self-taught” is a theme that echoes throughout Morland’s life and informs the eerily prodigious musical talents displayed on Pidgin Music, her debut full-length released earlier this year. She co-produced all 12 tunes with Matt Hansen, who recorded and engineered the project in his apartment. Morland and the other instrumentalists (including Juilliard-trained violinist Steve Huber, a friend who plays with the Fort Worth Symphony Orchestra) took turns in Hansen’s closet performing into a $50 mic. For all its lo-fi rawness, Pidgin Music is a compelling amalgam of picaresque folk and sinister cabaret. Morland’s remarkable voice – simultaneously sweet and punkishly frayed, prone to shooting up the scales in quivery, unexpected little cries ­- rides the slopes of her curving melodies with weird authority. A good approximate vocal comparison is Bjork.
“I’ve never had voice lessons,” Morland said. “When I decided to get serious about singing, I taught myself by trying to imitate Tori Amos’ voice. She’s an excellent singer for finding out how much range you have.” Instrumentals are Morland’s main poison, especially Eastern European gypsy music and Western swing, although she said she feels hopeless trying to mimic those rhythms on her guitar.


After high school, Morland got a job at the Weatherford Democrat as a graphic designer. The college route to a career had been bypassed. She learned the Mac programs by herself from scratch. In 2001, she joined the production team of the Fort Worth Star-Telegram, where she met virtuoso guitarist Darrin Kobetich, the first top-shelf professional musician to encourage her to record a demo and start hitting the club circuit. Some of her earliest shows were opening for Kobetich at The Wreck Room. Later on, her pre- and post-show sets at Hip Pocket Theatre earned her a small following among that company’s audience.
The variety of types that come to her shows surprises even her. “I get old hippies and young professionals, single artsy types, and parents with little kids,” she said, noting with glee that she heard one 8-year-old had named her doll “Kristina Morland” after hearing the artist play live. She also sees more guys at her shows than she would’ve expected, since her male friends’ musical tastes don’t usually run toward female musicians. “Guys will listen to other guys play, but for a lot of them, listening to a girl is like nails on a chalkboard. I don’t get it.”
So far, the pace of her career as a Fort Worth muso has been either leisurely or procrastinating, depending on how you look at it. Morland lacks the kind of aggressive self-promotional skills that artists with less ability have gone far with. It wasn’t until 2006 that she picked up the phone and began booking a regular schedule of club and coffeehouse dates for herself. Despite its unsophisticated recording technology, Pidgin Music proved to be a year-long collaboration, in part because of everyone’s conflicting schedules but also because Morland took her job as a first-time producer very seriously. Hansen and more experienced musicians gave her the creative space to record songs the way she’d accomplished everything else in her life: tackling a new project and gradually learning the skills to finish it as she moved along. She found her songwriting muse was moving in different directions, as well.
“I realized I wanted my songs to sound a little happier and more upbeat,” she said. “I’m tired of all the melancholy, negative stuff. Maybe songwriting is like therapy. The more you write about sad things, the more you get it out of your system and want to move on.”
Right now, Morland insists, she’s chosen a more goal-oriented path as an artist, albeit at her own curious, reflective pace. Not long ago she quit her position as a graphic designer at an Addison firm to move back in with her mother and concentrate exclusively on music. She’s currently navigating MySpace and real-world connections to set up an itinerary of club dates outside the North Texas scene. She’s begun recording songs for her second album at a studio called The Mezzanine Floor, located in an old red barn in Benbrook. The owners have offered her free studio time with the hope of further developing her eccentric carnival sound with ambient effects and improbable instruments like tuba and timpani. Morland sounds a bit overwhelmed by it all, but she has made a few promises to herself.
“I won’t take another year to record the second album,” she said. “I love Fort Worth, and I want to live here, but I will play clubs in other cities. And I want to be paid to play beyond just breaking even every time.” She paused. “But I’m still at the point where talking about money in connection with music feels weird.”