It’s impossible to come of age in a city as grand and colorful as Fort Worth without falling in love with the architecture and scenery: skyscrapers, mom-and-pop shops, rivers, viaducts, longhorns, stockyards, trains, movie theaters, and everything else that makes this city pop.


Veteran photographer Phil Vinson has been documenting the city with an artist’s eye and a journalist’s insight for four decades, and some of his best photos are captured in his new 108-page coffee-table book, Fort Worth: A Personal View. Don’t expect much narrative. Other than a brief note by the author and a forward by local historian Quentin McGown, the rest of the book’s pages offer color and black-and-white photos accompanied only by concise titles and the year each photo was taken.

Vinson is old-school – his dust-jacket photo shows him with one of those large-format cameras that looks like an accordion mounted on a broomstick, the kind used by masters such as Ansel Adams and Edward Weston to brilliantly capture clarity and light. Vinson, a retired commercial photographer and former Fort Worth Star-Telegram photojournalist, has been taking photographs since he was 12 and began developing and printing his own negatives at 13. That experience, combined with an obvious love for his subjects, results in a string of arresting photographs sprinkled heavily with a sense of nosta 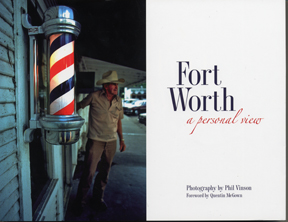 lgia. Check out the Leddy boot sign and other familiar landmarks in the Stockyards, the now-demolished 7th Street Theatre marquee, the Swift meatpacking plant’s haunting ruins, and the baby’s grave marker at Pioneer’s Rest Cemetery.

Photographers and artists have been documenting Fort Worth for more than 150 years, but Vinson carves his own niche by eschewing panoramic views of landmarks in favor of more intimate takes. His fascination with close-ups, dramatic light, and compelling visual design gives new life to some old landmarks.

“Many of the weathered boards and faded signs have disappeared as the city has grown from the small town we’d still like it to be into the big city we sometimes struggle to recognize,” McGown writes. “But if I had to list those sights and scenes that daily remind me that my city is still here and alive, the list would include these images that Phil created.”

The book is well worth the $30 price tag, but it’s not without fault. It chaps my Cowtown-proud ass that a book about Fort Worth sports a cover photo taken at a barbershop in Glen Rose. Vinson, in fact, included a handful of photos taken at cities around North Texas and even West Texas, as if he liked those shots so much he couldn’t bear to exclude them even though they didn’t fit the theme. Fort Worth proper ought to provide more than enough source material for a captivating book.