Who said that nothing’s shocking anymore? Circle Theatre has prepared a spicy holiday recipe to delight and disorient audiences by taking eight attractive, enthusiastic moppets; teaching them dialogue and songs that illustrate the theology of a bizarre, possibly abusive, and cult-like American religion; and staging the whole thing as an adorable children’s musical without a hint of irony. At a recent Saturday matinee, the audience seemed mostly unprepared for – and in a few cases perplexed by – what transpired. 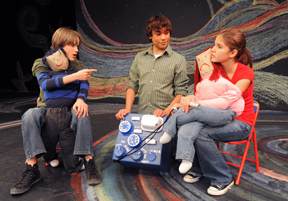 Scientology Pageant would stick out as an oddball entry in any theater’s season. You may be tempted to tag Amphibian Productions as “the Fort Worth theatre most likely to stage Scientology,” but this show isn’t a neat fit even within their subversive manifesto. There’s a faint whiff of playful sacrilege here, mostly in the way that the show narrates the life of Scientology founder L. Ron Hubbard as though he were the candy-colored Jesus of Sunday school classes. But neither Christianity nor any other faith is mentioned, so the comparison, while active throughout the show, toils in the background. Indeed, director Jaime Castañeda is after bigger game than the fat, obvious targets bagged by Bill Maher in his documentary Religulous.

Castananeda wants to sail you through a super-sweet lemonade gush of Hubbard’s elaborate, sci-fi-inspired dogma, stirring up big laughs with the material but starkly reminding us why people fall for it.

Scientology Pageant clocks in at a slim 60 minutes, and it feels even shorter thanks to the agile pace maintained by the eight young performers, ages 10 to 14, who play multiple roles. Choreographer Elise Lavalle has plundered High School Musical and the 1970s’ tween pioneer The Electric Company to decorate this Pageant with dorky-chic moves that look hip to a theater teacher but inspire cringes in student cast members. Circle’s young cast is utterly unselfconscious as it recounts the humble country birth of author and Dianetics creator L. Ron (Cayman Mitchell, his legs dangling over the edge of the manger). From the beginning, li’l L. Ron is obsessed with the problem of how to find happiness. His journey of discovery takes him to Hawaii, New York City, and Tibet (enacted by cast members in, respectively, hula skirts, designer heels, and monks’ robes. After joining the Navy in WWII, he winds up stranded in a lifeboat in the Pacific with a fatalistic fellow soldier Donald (Riley Morrison). This brush with death clarifies for L. Ron his own “Science of the Mind” theory that he soon labels Dianetics. This philosophy calls for the practitioner to separate reason from emotion and vanquish the latter as self-defeating. In this production, the grand battle of “Analytical Mind” vs. “Reactive Mind” takes place between two kids wearing Sumo fatty costumes. The subplot of the evil galactic Lord Xenu and the souls he banishes gets its own cardboard-and-Christmas-lights rendering.

You’ve probably guessed that Scientology Pageant revels in an idiom of dollar-store costumes and jerry-rigged special effects. Director Castañeda matches this unpolished quality by toning down his eight performers to a halting but oh-so-earnest delivery. Flip through the program credits, and you’ll find a collection of seasoned adolescents who’ve performed for years with Kids Who Care, Casa Mañana, PBS’ Barney and Friends, and on TV and radio ads as clients of agent Kim Dawson. These days, when it seems like every American kid has an agent and a publicist, Castaneda has wisely dissuaded his young thespians from any bravura. Even a hint of knowing irony would’ve deflated this show’s loftier goals.

In the pageant’s later stages, Hubbard is a wealthy guru with an international following but is betrayed by his own personal Judas – his WWII buddy Donald has joined the IRS and puts the Scientology founder on trial for tax fraud. L. Ron enlists his most famous disciples to defend him, including John Travolta (Logan Kirkendoll) and Tom Cruise (George Paddock in Top Gun jacket and shades). But L. Ron’s most effective witness – and the show’s most perverse twist – proves to be a suicidal homeless woman named Annie (the diminutive Taylor Fox) who converted to Scientology out of desperation. Fox launches into a poignant duet with Mitchell called “Rain, Rain, Rain” that nails the allure of fantastical religious promises to the hopeless: “Then I found you,” they sing, “And you held me near / And your words were like raindrops / Washing me clean / Making me clear.” In one startling moment, this Pageant transformed from a yuk-fest about those crazy Scientologists to an admission that the desire to transcend life’s troubles can’t be laughed off so easily. At the show’s curtain, half the audience gave it a standing ovation. The other half remained seated, apparently trying to process everything. Both were sane responses.

On a basic level, Scientology Pageant works because it challenges our cherished assumptions about children. Kids are relied upon to be society’s vessels of purity, avatars of unblemished goodness on earth. Suddenly, you’re faced with eight darling urchins singing about despair and sincerely peddling spiritual “knowledge” about electronic devices that cleanse your mind and about paradise as an intergalactic pleasure cruise. The dissonance between messenger and message is jolting. For those who relish surprising, unnerving tingles expertly delivered, Circle’s A Very Merry Unauthorized Children’s Scientology Pageant could be the best present you’ll receive this holiday season.