It’s that time of year again. Yuletide kvetches are being sung by a choir of folks worried about the Meaning of Christmas being lost. The refrain is so annoying that it’s become a challenge for anyone who wants to stage an entertaining, kindhearted holiday show that acknowledges, “Yes, Virginia, Christmas is the story of Christ’s birth.”


But help has arrived from a perhaps unexpected source. The Butterfly Connection has gone a long way toward accomplishing that with Reindeers Unplugged, a generous, laugh-filled production that Butterfly co-founder and actor-director Adam Dietrich calls the company’s first “faith-based” effort. While Jesus makes an appearance in a stained-glass nativity picture, it’s his teachings – compassion, charity, community, and non-judgmentalism – that dominate the tale. 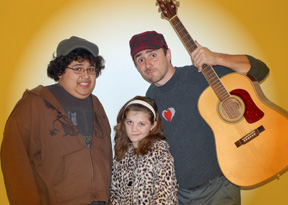 Indeed, the goal of playwrights Kate McDougall and Rob Bosquez was to create a non-proselytizing Christian story flavored with pop-culture hipness. As Dietrich declared in an introduction before last Saturday’s performance, the DELETE for Reindeers Unplugged is still a work in progress, and he was right: The show’s parallel stories of human and plastic reindeer shenanigans are overcrowded with story lines and lofty themes. As always with Butterfly, there are technical glitches and timing issues. Still, this is the most focused large-cast production by Butterfly that I’ve seen and contains its brightest ensemble performances in memory.

The six lead actors do double duty as humans and their light-up reindeer lawn ornaments. The Shallows (T. Cole Bellis and Louann Chapman) are a couple as buttoned down and banged up as the second-hand light-up reindeer in their front yard. Their endearingly ragged quality disconcerts the snooty uptown neighbors across the street – and across the socio-economic tracks: Priscilla and Darren Hues (Aja Jones and Jage Bothmann) and the “bachelor” snob next door, Harold (Shawn Gann). Their lawn reindeer were selected from the Neiman Marcus catalog, and they’re gunning to win the Home and Garden magazine contest for best neighborhood Christmas yard display. Those white-trash reindeer across the way are a problem that needs correcting.

Meanwhile, another neighbor, Robert (Rob Bosquez), is stumbling through the first holiday since his father’s death. In the reindeer half of the play, the death of “Papps” is alluded to through the presence of a broken reindeer left on the curb for the trash collector. The character that connects all of these stories is Adam (Adam Dietrich), a hapless Everyschmo who’s charged by the Angel Bethany (Chelsie Prendez) with creating a caroling band that will remind the townspeople of – you guessed it – the “true meaning of Christmas.”

As mentioned earlier, Reindeers Unplugged buckles under the strain of too many interwoven narratives and high-minded ambitions. The various character conflicts resolve themselves effectively enough by the show’s finale, but the number of Big Subjects targeted by the playwrights – commercialism, classism, loss of a loved one, the question of life after death – prove a little overwhelming when combined. Still, the show consistently charms thanks to the buoyant cast.

Dietrich’s befuddled, self-deprecating performance as an overly analytical protagonist plagued by spiritual doubts channels Woody Allen through a working-class Protestant filter. Dietrich even tosses off muttered, smart-ass observations that catch the audience off guard. “Grow up!” he chastises a 9-year-old xylophonist (Courtney Noetzel as Georgie). When she proves surprisingly proficient at the instrument, he remarks in a very Woody way: “What’ve we got here, hmm? A little Alicia Keys. A little Tori Amos.”
For the role of the glitteringly gay next-door neighbor Harold, Gann adopts a dead-on Harvey Fierstein vocal impersonation. It’s a gravelly, wonderful comic gift that keeps on giving throughout the show, especially when Gann sports big felt reindeer antlers as Harold’s upscale decorative alter-ego. Bosquez communicates authentic sadness – in a toned-down manner, suitable for a family show – as a character whose reindeer version desperately wants to save a fallen comrade. Jones exudes screwball energy as Priscilla, the disapproving neighbor-cum-preening ornamental reindeer in a gold lamé dress.

Reindeers Unplugged radiates a sweetness that helps rescue the show from many of its technical shortcomings. Although the references to Jesus are undeniable, The Butterfly Connection takes pains to avoid any kind of “one true savior” propaganda. In the process, all that caution does threaten to strand the piece in a kind of entertainment limbo. It’s not doctrinaire enough for conservative parents who might want a Christian children’s play to serve as a buffer against the secular world. Then again, it may be too Christian for anyone who recoils at the mere mention of the name “Jesus.” But if Butterfly’s gentle show strikes you as having a sinister agenda, then you probably think Linus Van Pelt’s Bible recitation in A Charlie Brown Christmas proves he’s a stealth member of Focus on the Family.

Arts Notes
Four performances of the area’s last major Nutcracker will be unveiled this weekend, courtesy of Metropolitan Classical Ballet. The Bolshoi-inspired production has been set by co-artistic director Alexander Vetrov, with costumes rented from the Moscow-based company for which he danced for many years. The dancers will be accompanied by the MCB Orchestra guest-conducted by Bernard Rubinstein. Company regular Olga Pavlova will dance the Sugar Plum Fairy. – Leonard Eureka

Sundance Steve
Next month, Houston’s Steve McVicker, a native Fort Worthian and longtime investigative journalist, is going to be at the Sundance Film Festival – not on assignment but to celebrate the premiere of I Love You Phillip Morris, a film adaptation of his 2003 book of the same name (see our review, “Break Out Book,” Nov. 5, 2003). With Jim Carrey and Ewan McGregor in the lead roles, it figures to be a hot ticket at the renowned indie movie fest.
“When they told me [Carrey] had signed on to play, all I could think was ‘Perfect!’ ” McVicker said. “I was so impressed by him in Eternal Sunshine of the Spotless Mind, I knew he was a great actor, period. And when I heard McGregor had signed on, I was elated again. He can do anything.”

McVicker ran across the story in the 1990s when he was working for an alt-weekly, the Houston Press. The exploits of Steven Russell, a former Boca Raton cop and church organist who became an escape artist, made for a juicy series of stories and column items. Russell engineered a series of daring escapes from prison only to be thwarted consistently, not by the cops but by his love for a fellow inmate named Phillip Morris. Eventually, Mark Schone of Spin magazine contacted McVicker for permission to write a book about Russell. “I got pissy with him and told him I wanted to write the book myself,” McVicker recalls. “I was a jackass, but instead of telling me ‘F.U.,’ he offered to help me.” Schone hooked him up with New York literary agent Peter Steinberg, and the book was off and running.

The story was eye-catching enough that the book’s movie rights were optioned before it was even published. After a few years kicking around Hollywood, the property was picked up by Mad Chance Productions and handed to Glenn Ficarra and John Requa, the Bad Santa screenwriting duo who were looking to make their directing debut. “They took the book and ran with it,” McVicker said. “I’m sure they’ve taken liberties. … I’m hoping to be surprised. I hope the movie’s good.”
The film was shot in Miami and New Orleans last spring, and McVicker was even given a cameo role as a judge.
I Love You Phillip Morris has not yet secured a distribution deal or a release date, though it’s already generating buzz because of Carrey’s role as a gay character opposite McGregor as Morris. Meanwhile, McVicker is working on a couple of other book projects (which he plays coy about) that he’s hoping will also turn into films. – Kristian Lin