When The Queen came out two years ago and scored a bunch of Oscar nominations and an eventual Best Actress win for Helen Mirren, some people in the movie-related blogosphere thought the film was undeserving. “It’s just a TV movie” was a complaint I heard in more than one spot. But what’s wrong with that?


The intellectual cut-and-thrust of people negotiating ethical dilemmas and facing down adversaries with words can be even more thrilling to watch than action heroes dodging bullets. Much drama in this vein has migrated to television and theater, but as two movies – both based on stage plays – opening this week prove, there’s still a place on the big screen to explore the dramatic possibilities of nothing except two people in a small room locking horns, especially if those people are played by great actors. 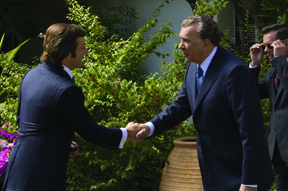 Peter Morgan wrote the DELETE for The Queen, and in 2007 he returned to the stage to produce Frost/Nixon, his play dramatizing the 1977 TV interviews in which BBC journalist David Frost finally got former U.S. president Richard Nixon to publicly admit his wrongdoing regarding Watergate. In very short order, the Ron Howard-directed film version of that play comes to our theaters and stars Michael Sheen and Frank Langella, the actors who originated the roles of Frost and Nixon respectively onstage. It’s hard not to think that a play that climaxes with Nixon’s line “When the president does it, that means it’s not illegal” might offer up a pointed commentary on the outgoing administration and its cavalier disregard for laws and the Constitution. Still, with its sturdy construction, this movie doesn’t feel like a rush job.

The film’s first half mainly draws character portraits of the two antagonists and sets up their encounter. Nixon is more familiar to us, both as a historical figure and a movie character, but here we get to see him in exile, delusionally plotting a return to politics with his chief of staff Jack Brennan (Kevin Bacon), playing the piano to his family and a circle of hangers-on, and scraping together a living by delivering an anecdote-laden speech to a room full of bored orthodontists in Houston. Meanwhile, Frost conceives the Nixon interview as a way of extricating his broadcasting career from a dead end of chat shows and celebrity puff pieces, from which he’s so desperate to escape that he exhausts his own life savings to pay Nixon’s $200,000 fee. Frost is presented as a vain, shallow womanizer who openly lusts after fame – “Success in America isn’t like success anywhere else,” he exults to an uncomprehending fellow Brit – but these same character flaws will drive him toward his ultimate victory.

The film follows the play’s lead in using documentary-style flashbacks in which the supporting characters give us background information by discussing their experiences as if they’re being interviewed. Howard doesn’t have to do all that much to translate the play to the screen, but what he does, he does well. The film proceeds at a brisk but unhurried pace and inexorably draws us further into the looming conflict. For a director who’s been on a losing streak for this entire decade, this work is an encouraging return to form.

The real fireworks take place in the second half, when the interviews are taped in four sessions at a private residence near Nixon’s home in San Clemente, Calif. History tells us that Nixon the statesman underestimated Frost the lightweight TV man, but the movie shows us Frost guilty of mistaking his opponent, drowning in a torrent of Nixonian verbiage and barely able to get a question in edgewise during the first session. The interviewer tries to be more aggressive later on, only to be frustrated by his target, whose slipperiness is mitigated by enough hard stances to allow him to come across as a man of principle. (At one point, Nixon throws Frost off balance just before the cameras are switched on by asking, “Do any fornicating last night?” This actually happened, by the way.)

The chess match between these two is riveting, with Sheen serving as a sharp, smooth foil to a magnificently blustery Langella. The latter doesn’t really look like Nixon, but he captures the ex-president’s intellectual gifts and warping inferiority complex in a late-night phone call, with Nixon ranting to Frost about all the people who looked down on him. The ex-president grows louder and more profane until his climactic line “We are gonna make those motherfuckers choke!” Perhaps Frost/Nixon doesn’t tell us anything new about abuse of presidential power, but this superb aria is worth the price of admission in itself, and these two performances alone are reason enough for this movie to be made, and seen.

John Patrick Shanley won an Oscar in 1987 for his DELETE for Moonstruck, so Hollywood handed him a chance to direct his first movie three years later. He proceeded to make Joe Versus the Volcano, and the resulting critical and financial drubbing chased him all the way to Broadway, where he slowly rebuilt his reputation by writing plays. His stage career culminated in 2005 with Doubt: A Parable, which won the Pulitzer Prize for Drama. Now, 18 years after his filmmaking debut, he has returned to the big screen with an imperfect but effective version of his best-received play.

Doubt is set in 1964 at a Catholic middle school in the Bronx, presided over by flinty, traditionalist principal Sister Aloysius (Meryl Streep). She suspects her popular, progressive teacher Father Flynn (Philip Seymour Hoffman) of being a pedophile, and the drama ignites when she accuses him outright after he’s seen meeting in the rectory alone with Donald (Joseph Foster II), one of his students. Father Flynn vehemently maintains his innocence and vows to clear his name. If child molestation isn’t incendiary enough, Donald is also the school’s first and only black student, and his mother (Viola Davis) takes the priest’s side because Father Flynn is the only one protecting her son from the other boys. Disturbingly, she’s even willing to let Donald be molested if it’ll save his life – her line “Let him have him, then” hits you like a punch in the stomach. Caught in the firestorm is Sister James (Amy Adams), a young teacher who, much like the audience, has no idea what to think or who to believe.

As with the play, we never definitively learn the truth about Father Flynn, and this gives rise to much of the story’s queasiness. Something monstrous is unfolding before us, and we’re not sure what it is. What’s worse, a child molester running loose or an ordinary man being unjustly persecuted? The play famously inspired fierce post-curtain debates among theatergoers over whether Father Flynn was guilty or not, and the movie will likely do the same. (I watched this film and thought he was guilty, but when I saw the play two months ago at WaterTower Theatre, I thought he was innocent.)

The stage play utilized only four actors, but Shanley could hardly have made that work onscreen even if he wanted to. So he shows us Donald, the other kids, the nuns under Sister Aloysius, and the working-class parishioners. He also writes in a few untheatrical scenes that flesh out character detail and this world. The movie gains atmosphere and realism as a result. The trouble is, it also loses momentum and concentrated power. We’re still left with some idea of the play’s ruthless forward motion, especially in the final four scenes that follow closely on each other in the film’s second half, right down to the disquieting last line. Even so, the director’s technical inexperience and his ham-handed symbolic touches wind up diluting the original material.

Of course, the A-list cast is the main attraction here, and the four principals have been carefully chosen for their voices. The contrast between Hoffman’s brash deluxe baritone and Adams’ decorous flutey soprano is stark and effective – things like that make the movie a pleasure simply to hear. Streep actually does the least to distinguish herself, but she wisely tones herself down in the presence of three such high-intensity performers. The real acting honors go to Viola Davis, who has only one scene in the film and burns up the screen with it, fighting valiantly for her boy’s welfare without ever raising her voice above a deferential whisper to Sister Aloysius. I can’t help but think that if I’d seen these four actors perform the play on a stage someplace, the experience would have been seared into my memory forever. The way it is, though, Doubt is still disturbing and thought-provoking fare for the holiday season. The school where it takes place is even named after St. Nicholas. Merry Christmas, everyone.