This past summer, a cancer-stricken and emaciated A.C. “Ace” Cook said he was no longer interested in buying art and was selling his beloved Hock Shop Collection, a multi-million-dollar assortment of paintings by the state’s most renowned early artists, most of which is on permanent display at The Bull Ring, an ice-cream parlor/icehouse in the Stockyards (“Ace Folds a Hand,” Aug. 20, 2008).


He is currently in negotiation with two potential buyers. But Cook admitted there were a dozen or more paintings he would snap up if they came on the market because they would fit so perfectly into the Hock Shop’s theme of representative landscapes and scenes depicting the simple lives of the state’s poorest residents. 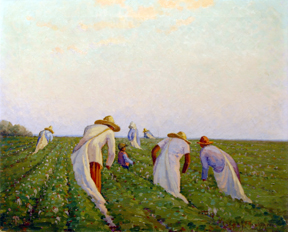 Cook stood before one of those paintings a couple of weeks ago, when he and another Fort Worth art lover, Morris Matson, visited Visioning Beauty, a retrospective of early Texas artist Ella Mewhinney at the Bell County Museum in Belton. Even though he knew “Gleaners of the South” was owned by the museum, Cook made a pitch to director Stephanie Turnham anyway.

The painting shows cotton pickers bent over, working rows that stretch far into the horizon, an “endless row of stoop labor,” Cook said.
Matson and Cook had left Fort Worth that morning and driven two hours south on I-35 to see this exhibit of one of Texas’ noted early artists. Mewhinney was a regular exhibitor at the Fort Worth Art Association’s annual Carnegie Library exhibitions in the 1920s and ’30s and a favored artist at the exclusive 1936 Texas Centennial Exposition in Dallas.

Art lovers have long been drawn to Mewhinney’s landscapes, florals, and still-life scenes, and celebrated art collector Cook is no different.
While “Gleaners” was the main draw for Cook and Matson, they became excited by a handful of Mewhinney’s other creations. “Shadows,” which won a prize at the 1928 Edgar B. Davis wildflower competition in San Antonio, displays the depth of her training and skill. “When I walked in, I knew they had a winner,” Matson said. “This exhibit is fantastic.”

Michael Grauer, the Panhandle Plains Historical Museum curator and author of Dictionary of Texas Artists 1800-1945, wrote an essay describing how Mewhinney “led the charge” among the often-overlooked women artists whose work gained acclaim after the Centennial Exposition. “Experimentation,” he writes, “almost became de rigueur for women artists in Texas as they fought their way out from under the shadows of not only their male counterpoints, but, for some such as Mewhinney, from the sexist strictures applied to them due to their own physical beauty.”

Born in 1891, the Bell County native spent most of her life in the tiny town of Holland, near Temple. Her prolific output included many scenes of her Central Texas surroundings, and “Under Texas Skies” was a centerpiece painting at the Chicago Century of Progress Exposition’s Texas exhibit in 1933.

More than 40 of her paintings are included in the Bell County exhibit, as well as some personal belongings, including her painting frock.
Cook and Matson were talking to Turnham on their way out, after two hours of enjoying art, when Cook turned and made a new offer for the cotton pickers. “If you ever decide to sell that painting, I’ve changed my mind – I’ll give you $25,000.”

Driving back to Fort Worth, Cook admitted he’d pay $30,000, but the old horse trader said, “I didn’t want to show all my cards.”

Arts Notes
To celebrate the life of entertainer and Hip Pocket Theatre force Douglas Balentine, who passed away last week at the age of 57, some local performing arts-lovers and brother Bruce Balentine have put together a memorial program that will feature recordings of some of his most memorable works, including Old Mother West Wind, Lake Worth Monster, standalone songs, excerpts from Casa Playhouse, Hip Pocket Theatre, and Jubilee Theatre, and more. The celebration is on Sat., Jan. 3, at Arts Fifth Avenue (1628 5th Ave., 817-923-9500) from noon ’til 6 p.m. Admission is free.