The 2003 release of Wave on Wave marked a turning point and dividing line in Pat Green’s career. Some of his early fans considered the album a sell-out and criticized the Lone Star native and independent artist for signing with a big label, hooking up with a pop producer, and diluting his roots. Others saw Wave as a sign of maturity and growth. I’m firmly in the latter camp, and so Green’s latest effort doesn’t turn me off on principle but doesn’t exactly twirl my toes either. 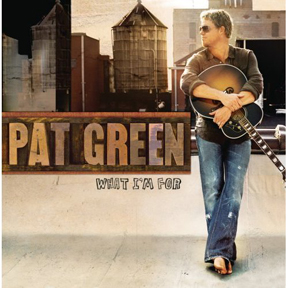 Green has once again hooked up with a mainstream producer – Dan Huff (Keith Urban, Dixie Chicks) – on a big label and created a slick batch of material that softens but doesn’t douse Green’s natural edginess and zestful enthusiasm. Green co-writes most of the songs, which is good and bad – it stretches him in places, homogenizes him in others. For instance, the album’s co-written opener “Footsteps of Our Fathers” is reminiscent of Wave on Wave and is an excellent rock-infused barnburner that will surely kick ass in concert. “In It For The Money,” “Country Star,” and several other songs feature a brackish Green combining humor, musical muscle, and a hell-raiser’s sensibility. In others, such as “In This World,” he effectively explores his poet’s mind. While some fans might prefer he do nothing but sing three-chord songs about getting drunk and eating tacos, it’s his contrasts – country boy, rocker, thinker, mindless beer guzzler – that make him interesting. “Let Me” is being pushed as the single, and it’s an OK if predictably soaring ballad that’s tailor-made for pop radio.

On the down side, hooking up with major labels, pop producers, and co-writers can lead to traps, and Green can’t help but get ensnared. The title song, for instance, is a nose-pinching, reeking example of Nashville Songwriting 101 For The Patriotic But Mush-Brained Country Fan. (Sample lyrics: “I’m for Detroit factory workers … Texas margaritas … inner city teachers …” and so on. Uh, great, Pat, thanks for sharing the obvious.) Green didn’t even co-write the damn song, so why he’d burden an otherwise decent album with that pap is a mystery that only his producer, accountant, or hairdresser knows.