Black churches accuse the appraisal district of singling them out.

If the Rev. Kyev Tatum, self-described “servant of the people, champion of the poor, advocate of the have-nots, and child of God,” is right, the city of Fort Worth may have picked a battle it cannot win.

Harmony Missionary Baptist Church, where Tatum is a member, owns four empty lots on Rosedale Street, where a fading sign indicates Fisher Beauty Salon once stood. The land is partly paved, the rest grassy, and it’s in a different neighborhood than Harmony’s church building on John T. White Road. The church owes the Tarrant County Appraisal District almost $19,527 in unpaid property taxes. And Tatum thinks God is on the church’s side in its fight to not pay the “ungodly taxes” and to stand up to unfair city “tax-and-take” tactics. 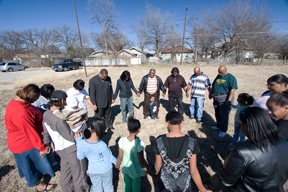 For their part, the city of Fort Worth and the Fort Worth Independent School District, which filed a joint lawsuit, insist they were simply following procedures to collect unpaid taxes on non-exempt properties. The result is a legal dispute in which, the plaintiffs claimed, Harmony hasn’t rendered unto the city and the district what is due to them. Despite Tatum’s claims of a larger power being involved, the government seems to be winning the war.

Texas property tax code says religious organizations may claim exemptions on property “used primarily as a place of regular religious worship.” That means church buildings can be exempted from taxes. Tatum says Harmony’s empty lots, two-thirds of an acre, are used for “outreach,” including for revivals and as a place for members to park cars when they visit the community.

“It was a real depressed area,” Tatum said of the neighborhood, near Polytechnical High School. “We walk the neighborhoods, hand out tracts to people, give them something to eat. It connects us to that inner city.”

According to Tatum, the city and the appraisal district are targeting poor black churches for foreclosure in areas of economic redevelopment. Levying property taxes on churches that can’t afford to pay them amounts to “taxing and taking” the land for the city’s own purposes while large corporations are given tax breaks.

Tatum said he heard that a developer wanted to build a pizzeria on the land. “It’s reverting to a Jim Crow mentality of the past, treating poor black people differently,” he said. “Tarrant County is the worst in the nation. They tax and take poor black churches’ land and then slander and demonize those who can’t pay their taxes.”

Stephen Meeks, an attorney with Linebarger, Goggan, Blair & Sampson, the firm hired by the city to handle delinquent property tax cases, said that Harmony has been sued before by the city. “There haven’t been taxes paid on [the church’s lots] since 1999,” he said. “There was a lawsuit filed in 2003, and we tried to enter into installment payment agreements with the church on separate occasions. They paid taxes in August of 2008 on some of the properties, but they didn’t follow up on the payment agreement, so like anything else we went to court.” Meeks said that he knew nothing about the city wanting to sell the property specifically for redevelopment.

Tatum, who currently serves as an advocate for various churches rather than leading any church himself, said that Harmony and its pastor, Dr. Frank Lawson, paid the taxes in order to keep the land from being taken, but that they intended to protest.

Tatum’s not alone in seeing a pattern. Pastor Tom Franklin is 72 and has led the New Mount Calvary Church in South Fort Worth for 35 years. He said his problems with TAD took 22 years to resolve. “We bought the land for our church in 1975, paid it off in ’85, and the appraisal district told us we owed taxes on it,” Franklin said. TAD said that the church should pay taxes on half of its land. The church, he said, went to court, and a judge ruled that the property was exempt from taxes. But that wasn’t the end.

“The appraisal district came back the next year and said we owed taxes,” Franklin said. The church went to court again and appealed its case all the way to the U.S. Supreme Court, which declined to hear the case. The church’s land – all of it, not just the half it owed taxes on – was put up for sale by the city, but there were no buyers. Together with Tatum, Franklin went to the Texas Legislature for help. The fight ended in January 2007, when the church was finally granted a full exemption.

In Harmony’s case, the Tarrant Appraisal District sees the matter differently. If a church is planning construction, “the law does allow for an exemption status for a three-year period of time since [the property in question] is not adjacent to an existing church,” said Ruby Bressman, an exemption specialist with the district. “But [Harmony hasn’t] applied.”

Tatum said the church did apply for the exemption but was denied. “The church went to TAD to file paperwork, and they denied it, and they said, ‘We’re not going to give it to you,’ ” the minister said. “They’re saying that land is not being used for religious purposes. Who gives them the right to determine that?” The church, he added, would like to build a community tutoring center on the land, in partnership with the city, but a difficult economy and a low-income flock have made the task a Sisyphean endeavor.

The problem with tax code, Tatum said, is that it gives TAD unilateral authority to determine if a property is exempt. “They [TAD officials] are not elected,” he said. “There’s no accountability. It puts the burden of proof on the church, instead of government. That’s bad policy.” Tatum and Lawson said they believe churches are “tax-immune, not exempt” by virtue of the First Amendment to the U.S. Constitution.

The issue is not whether Harmony is exempt from taxes, but whether it is delinquent in paying them, said Jim Popp, managing partner at Popp, Gray & Hutcheson in Austin, which calls itself “the property tax firm of Texas.”

“If the church believes it is entitled to an exemption, it has to file for it,” he said. The appraisal district would then determine whether they’re entitled for an exemption.” 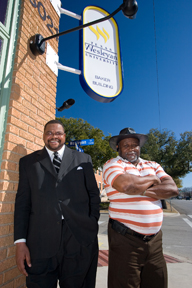 If that failed, according to Popp, the church should have filed a protest. But because Harmony entered a payment plan with the city last year, it can’t claim it’s exempt from taxes anymore. “If they were under an installment plan, then the issue of whether they use the land for church purposes or not is irrelevant,” he said.

Harmony sought the counsel of the Liberty Legal Institute, a network of attorneys who represent defendants on religious rights issues, but Liberty declined to take the case.

The lawsuit played out in court on Jan. 22. Harmony presented its case, but Judge Tom Lowe ruled for the city and school district.

Tatum said that the judge “empathized” with Harmony’s claims but said he was bound by the law. “Now the law may be the law, but the judge has discretion in the courtroom,” Tatum said. “He refused to use this discretion.”

The attorney representing the school district, Elizabeth Parmer, said the judge ruled correctly. “The judge told the church that they didn’t understand how exemptions worked and that these properties weren’t exempt,” she said. “He was nice to them and said he understood why they were upset. We told him we’ll try to do an installment agreement and see how they want to do it.”

Harmony agreed to allow the partial taxes it had paid on three lots to be transferred to cover the full tax bill on one lot, so that that piece of property at least would be exempt from the judgment. “If the church makes arrangements to pay on the rest of the lots, it can keep them,” Parmer said. “Or they can build something on them and get an exemption. But they could lose the property otherwise.”

Tatum said that the loss in court was unfortunate but that the church didn’t intend to cave in and pay taxes it can’t afford and would instead appeal to higher authority: “We’re fed up with this,” he said. “We think it’s in violation of the [U.S.] Constitution. It’s a violation of civil rights. We’re calling on the Justice Department, now that it’s under the leadership of Eric Holder, to investigate this practice.”

Popp, the property tax specialist, said the chances of Harmony prevailing aren’t good. “There may be some constitutional argument about separation of church and state,” he said. “But that’s not the issue here.”

Freelance writer Pablo Lastra can be reached at lastra.pablo@gmail.com.