Both are escapist but not in any comedic or thrilling way. In their complete theatrical worlds, mundane events are tinged with the supernatural, and suffering is rendered with grandeur. If nothing else, you may come away thinking: “Damn, maybe my life isn’t so bad, after all.” 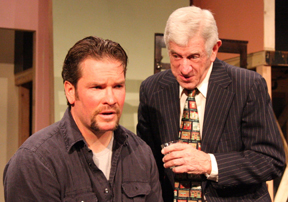 The working-class Irish living room that is the scene of all of the action in The Seafarer has been suitably decorated for its yuletide season – set designer and actor Jim Covault summons a tacky-cozy environment, replete with angel-topped mini-Christmas tree, flickering candle in the window, and gilt-framed illustration of Jesus with its own little electric lamp. Despite or perhaps because of all that ordinariness, director Rene Moreno and his five virtuosic actors transform this room into a plausible arena where one man will confront the ultimate darkness in the form of a dapper stranger.

This is the fourth script by McPherson that Stage West has produced, so the company is familiar with his tight rhythms. In shows like St. Nicholas, an extended monologue in which a debauched drama critic recalls a professional association with vampires, and The Weir, in which patrons at a pub try to outscare one another with fright tales, McPherson demonstrates the vaunted gift of gab associated with his motherland. But he is not sentimental. His dialogue is almost journalistic in its slangy austerity. He has affection for his characters but refuses to arbitrarily rescue them from their ever-deepening holes. His two main goals seem to be making audiences laugh and making them very, very uncomfortable. The two are not at all incompatible in his fatalistic worldview.

The Seafarer opens soon after the holiday return of Sharky (Matthew Stephen Tompkins) to the home of his older brother, Richard (Covault). Richard has been blind ever since he took a drunken Halloween night tumble and cracked his head. Sharky has come back ostensibly to care for the literally benighted Richard but also because Sharky’s a perennial fuck-up. He’s got a loose grip on his own life – he can’t hold his liquor, his temper, or a job. The two days of sobriety he’s managed to accrue are a white-knuckle affair: Richard and their friend Ivan (Chuck Huber) are downing beer and whiskey with glee in front of Sharky, Richard can’t stop reminding his younger brother what a disappointment he’s always been to the family, and soon Sharky must play host to a Christmas Eve night poker game with Nicky (Chris Hauge), the man who stole Sharky’s wife. But this Dublin Job’s real troubles come from Nicky’s surprise guest, Mr. Lockhart (Jerry Russell). Spoiler alert: The nature of Mr. Lockhart’s game is not at all puzzling – Old Scratch has come back to collect on a promise Sharky made him one dark night in a jail cell.

For the most part, McPherson is not a literary playwright. He doesn’t rely on symbolism, metaphor, and floral language. Profanity-laced Irish vernacular is the fuel that fires his dramatic engine. As a result, the actors who perform his plays must work extra hard to hit their beats and cues, to find the emotion in the scripted moment, to produce as much spontaneity as they can without derailing the determined pace. Under the meticulous direction of Moreno, the five actors in this Seafarer are so vital and consumed by their roles that the usual suspension of disbelief by playgoers is unnecessary. They provide the most instantly satisfying kind of theater, the kind that indulges our naughtier tendencies – the audience members become eavesdroppers, voyeurs, witnesses with unfettered access to other people’s messiest moments.

As Sharky, Tompkins mixes his tigerish temper with a manifest remorse that’s related through body language: He is a man physically overcome with emotion at times. In the show’s second act, Fort Worth veteran Russell as Mr. Lockhart adroitly and mercilessly delivers the scariest description of eternal damnation I’ve ever heard. (His account is especially gulp-inducing for anyone who suffers from panic attacks.) Covault is a revelation as Richard, Sharky’s blind, manipulative older brother. His opportunistic campaign of emotional blackmail against his wastrel sibling is almost villainous – until the moment when Richard calls out Sharky’s name and Sharky takes too long to reply. The hint of a child’s terror of the dark creeps poignantly into sightless Richard’s voice.

The Seafarer feels more like a high-wire act than many shows precisely because the playwright and the director refuse to lean on theatrical artifice and instead steep the production in a daunting naturalism. The thrill for ticketbuyers is in knowing how far this fearless quintet of actor-acrobats have to fall and in watching how their total commitment to these unseemly characters keeps them balanced.