Tandy Hills gets a haircut, after years of pressure from environmentalists.

By BRYAN SHETTIG and JEFF PRINCE

The city’s best example of native grassland prairie isn’t all that great anymore. Trees have been taking over Tandy Hills Natural Area for years, choking out the wild grasses and flowers that have made the park unique in North Texas.

Now, after years of neglect, the city of Fort Worth is showing a renewed commitment to restoring the park to the way it looked back when wildfires periodically cleared the land of trees and promoted the growth of grasses that sustained huge herds of buffalo. 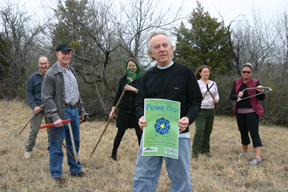 A crew of chainsaw-wielding tree-slayers will begin laying waste to the unwanted canopy this week, and volunteers will converge on the park on Saturday to drag the cuttings to the curb for removal. What’s more, the city is pledging to make the tree-clearing an annual effort, ensuring the grasslands remain intact for ensuing generations.

“This is a huge step forward,” said Don Young, one of numerous Eastside activists who have pleaded with the city to better maintain the park in recent years.

The informal group began calling themselves the Friends of Tandy Hills Natural Area about four years ago, and created the Prairie Fest. The annual outdoor festival uses music, art, dance, environmental displays, and wildlife tours to bring attention to the park. That first year the festival attracted only a handful of vendors, visitors, and entertainers. Since then, however, the celebration has exploded. About 2,500 visitors attended in 2008, along with 100 vendors.

About 125 vendors, including three city departments, are taking part in this year’s event on April 25.

Friends of Tandy Hills lobbied city hall for help in clearing the shrubs and trees in the past but couldn’t get much response, perhaps because many of the same activists were also battling the city over what they deemed as intrusive urban gas drilling policies. The city owns the park and was eager for gas drillers to establish pad sites on adjacent property and drill horizontally underneath the park.

The resulting interaction between Young’s group and city staff was strained at best. That mutual venom didn’t make for a cooperative effort to maintain the park – until now.

“The city had pretty much ignored us but has gradually begun to show some more interest,” Young said. “This year we had several meetings with city staff, and they’re finally acting like they are showing more pride in this place. I guess we finally spoke loud enough.”

More accurately, they spoke in unison. Young and his activist buddies caught the city’s attention after Friends of Tandy Hills Natural Area established a board of directors and applied for and received charitable, tax-exempt status.

“That shows they’re not just a fly-by-night organization,” said Mark Woolsey, a superintendent director for the city’s parks department.

Volunteers who will help to drag mangled trees are a benefit, Woolsey said, since his department doesn’t have the staff it needs to tackle all the jobs there are to do in the city’s parks. About six to eight city staffers will be packing chainsaws on Saturday, and an estimated two dozen volunteers have indicated they will participate.

The city’s primary motivation for tackling the overgrowth was the creation in July of a Tandy Hills master plan, Woolsey said. According to the plan, the clearing of trees and shrubs is meant to make the park more accessible to hikers and park-goers. The plan, prepared by an environmental consulting company for the city, was based in part on a survey, which found that most local residents wanted a nature center, trails, and interpretive signage at the park just south of I-30.

And despite the park’s history as prairie, people surveyed for the master plan said they don’t want all the wooded areas to go away. Woolsey said the city doesn’t plan to “denude the landscape” completely of trees.

The master plan describes how to use controlled burns to maintain the prairie, a method used by Native Americans to renew the grasslands and enrich the soil in generations past. Burns also occurred naturally from lightning strikes. But the city isn’t interested in setting the place ablaze – too many safety and potential liability issues.

“We’re not considering burning as part of the process – there would be a lot of objections to that,” Woolsey said.

Motorists traveling on I-30 between Beach and Oakland streets have long noticed the rolling hills that have remained undeveloped despite the gorgeous vistas and close proximity to downtown. The city obtained the 160-acre Tandy Hills in the 1960s and designated it as a natural area in 1987.

For years, it was a popular but illegal gathering place for riders of all-terrain vehicles that destroyed plants and promoted erosion. At night, people would sneak in to dump loads of trash, old tires, and toxic materials.

City officials took action in the 1990s, bordering the park with cables to make it more difficult for trash-dumpers and off-roaders to enter. After that, the park stayed cleaner, and eroded spots began to heal. Tandy Hills contains more than 500 native plant species and is considered among the best places in North Texas to look at wildflowers each spring.

Still, like most of the land in North Texas, much of Tandy Hills has transformed from prairie to what amounts to a forest of ash, juniper, and mesquite. Back in the 1800s, vast grasslands stretched from central Texas to Canada, with few wooded areas breaking up the green and tawny sea. Early European settlers had never seen anything like it. Prairies that stretched for miles could be mind-numbing, kind of like living in the West Texas desert, and yet spring rains turned the landscape into a paradise. Letters written by these settlers often refer to the flora’s beauty.

A century later, fencing, grazing, farming, and development had changed everything. Million-year-old grasslands became clustered with farms, industries, thickets, and neighborhoods. Preserving the rolling grasslands just east of downtown became a mission for nature lovers like Young, who grew up in that area and now lives across the street from the park. Their efforts are finally paying off.

“The squeaky wheel gets the grease, and we’ve been pretty squeaky over here,” he said.

The nonprofit group’s newest member is Esther McElfish, a marketing consultant with an environmental bent.

“It’s a good sign that the city understands the importance of this natural area,” she said. “Even natural areas have to be maintained. This is the perfect example of the city and the people working together.”

Indeed, the nonprofit group’s passion and willingness to provide sweat equity and drag away whatever is cut down is one reason the city agreed to establish an annual clearing.

“Volunteers wanted to see the progress going on, and we realized there was a need to get something going on out there,” Woolsey said.