Ricki Epstein has two culinary alter egos, and never the twain shall meet. By night, she runs a catering company that does big-deal events, offering delicacies like smoked salmon cigars, artichoke mini-quiches, and spinach salad with strawberry. Her clients have included the Fort Worth Symphony Orchestra, Casa Mañana, and U.S. Rep. Kay Granger. 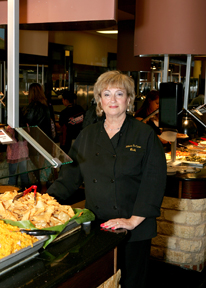 By day, Epstein, a gregarious 64-year-old workaholic, runs Zorro’s Buffet. She co-owns it with her husband Moshe. At the South Fort Worth restaurant on I-35 just north of I-20, the Epstein family’s large staff prepares and serves epic quantities of home-cooking staples like mashed potatoes, beef brisket, pork chops, macaroni and cheese, cole slaw, and multiple salads and desserts. There’s a different theme and a special menu for each day of the week: Monday is “Steak and Shrimp Day,” Wednesday is “BBQ Day,” Friday “Seafood Day,” and so on. Epstein frequently works until 2 a.m., maintaining her separate business identities as catering queen and comfort-food matriarch. For her, it’s all about problem-solving.

“My theory as a caterer is, ‘If you can buy it at a grocery store, you don’t need me,’ ” she said. “I’m always trying to invent new recipes [for clients]. But I never mix my jobs as a caterer and a restaurant owner. For the buffet, my challenge is, ‘How can I get as much fresh, affordable food to as many people as possible?’ “

Having a huge staff is a start. Zorro’s employs about 70 in the 4,500-square-foot kitchen alone. “We don’t use a commissary,” she said. “We have about 10 people doing the prep work alone. If you see cooked cabbage at Zorro’s, that cabbage has been washed, chopped, seasoned, and cooked on the premises.”

Epstein was born in what was then called Palestine and is now Israel. There she met her husband, an entrepreneur and the first to import Wimpy’s Hamburger franchises from the United States to Israel. Ricki always wanted to become an educator, though she loved to cook for dinner parties, birthdays, bar mitzvahs, and other family events. She came to America in 1985 and completed her master’s degree in education administration at New York’s Fordham University and went back to Israel and taught school. In 1992, her husband accepted a banking job that brought the Epsteins to Arlington. Ricki, who speaks fluent Hebrew and Spanish, was told she was overqualified for most of the Tarrant County public school jobs that interested her. And so she began considering how to turn her love of food into a living.

“I think, all along, my husband was a role model, and I didn’t know it,” she said. “I was watching him [at Wimpy’s] and thinking, ‘I love to cook, I want to make a business out of food.’ “

And so she did, opening Hudson’s Deli below City Club in downtown Fort Worth’s D. R. Horton Tower in the early ’90s. She adored the professional clientele but didn’t care for rising in the early-morning hours to prepare for the first business rush. Her tiny staff could be unreliable about showing up on time at 3 a.m. to help open the deli. After Hudson’s closed, she started Affairs to Cater and built a client list at her own leisurely pace.

Last summer, at an age when most people are readying for retirement, Ricki launched Zorro’s Buffet. The logistics of the buffet business model — how to balance quality, military-sized food output with enough regular foot traffic to make a profit — intrigued her.

“More restaurants close than open,” she said. “I thought the American system [that worked] was people wanting to get as much variety for as little money. People want to leave feeling like they’re exploding from good food for a low price.”

On a recent Thursday (“Fajita Fiesta Day”) visit at 3 p.m., the parking lot was packed, and the diners were perusing row upon row of sides, salads, soups, condiments, and steaming meat entrées. Servers and buspeople wearing mini-aprons and collared shirts emblazoned with the name “Zorro’s” fluttered around like hummingbirds. Moshe is the family’s public face, a jolly in-house PR man who roams the tables during peak hours taking complaints, suggestions, and praise.

The food proved to be as generally fresh as Epstein boasts: nothing dried-up and unappealing clung to the bottom of the pans. The pork cutlets in brown sauce were all white meat with a nice ring of hot fat around them. The carrot soup was smooth, hearty, sweet, and delicately pulpy. The salsa verde was fiery and savory.

Still, Zorro’s is a very large buffet, and the nature of that beast means some of the items — the rice pudding with raisins, the beef fajita strips, the whole roasted chicken — lacked distinctive flavor. But at a lunch price of eight bucks and change, the fact that nothing was overcooked or undercooked is a victory in itself.

Moreover, Zorro’s does radiate the inviting sense of community that Epstein intended. With its high, curved ceiling, the place feels comfortable even when it’s crowded: You can hear a pleasant hum of overlapping talk without being bombarded by any single nearby conversation. Epstein claims they serve an average of 7,500 people a week, 2,000 of whom flock there for Sunday brunch and lunch. She proudly pointed around the restaurant to the diversity of folks chewing and chatting.

“You’ll see people in suits and cuff links, in work boots, in service uniforms, families, and singles,” she said, checking each group off in her mind. “We have senior citizens who come here two, three times a week and tell us they take two buses to get here. It’s a community thing.”

Drink the Kool-Aid at Shake Shack