Sometimes the reputation of greatness can be stifling. That’s the conclusion you arrive at if you’ve seen other, frequently staid August Wilson productions and compare them to Jubilee Theatre’s simmering, roiling interpretation of the playwright’s The Piano Lesson. 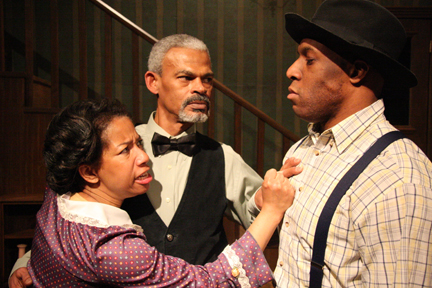 The problem lies in the way many directors approach this venerated playwright. His expansive grasp of American history, his mythic sense of the supernatural, and his ease with the colloquial rhythms of his characters’ speech would’ve shortlisted him for god-like status in the theater world all by themselves. But the playwright, who died of liver cancer in 2005, went further and secured his place on the pedestal by sheer ambition. His “Pittsburgh Cycle” contains 10 plays, each chronicling one decade in the 20th-century African-American experience.

All of those bona fides are legitimately awe-inspiring, but the handful of Wilson productions I’ve seen usually smacked of civic duty in the way that summer Shakespeare presentations often do: skillful but distant, and timid with the material. In short, too reverential. The operating assumption seemed to be: There’s no need to listen to what the playwright is saying, to locate the shifting moods and colors in what is said or — God forbid — to actually enjoy the telling because, you know, August Wilson writes great literature. End of discussion.

Jubilee Theatre artistic director Ed Smth understands that excessive author worship will drain the blood from Wilson’s frustrated but often joyous characters. Smith’s raucous version of The Piano Lesson — the fourth in the “Pittsburgh Cycle,” and set in the 1930s — crackles with the tension between dazzling hues in the foreground (a stellar cast capable of endless delights) and stormy currents in the background (an unquiet ancestry of slavery, violence, and retribution). The Piano Lesson has more obvious comic potential than many Wilson scripts, and Smith nudges his cast to exploit the grand vanities built into each role. But to paraphrase Carl Jung, the brighter the comic light that shines in this show, the darker the shadows that emerge. The people in this play are constantly struggling to free themselves from a dark past whose brutalities they can barely comprehend.

The central conflict is between straight-arrow Berniece (Lorey Hayes, radiant and fierce), who’s migrated to Pittsburgh after her husband’s murder in Mississippi, and her fast-talking opportunist brother, Boy Willie (Bryan Pitts in a big-voiced, bravura turn). He arrives at her Pennsylvania home with goofy pal Lymon (Aaron Petite, a master mischief-maker) and an ulterior motive: to sell the family piano that was long ago ornately carved with the likenesses of their enslaved great grandmother and grandfather. With the money from the sale, Boy Willie plans to buy a plot of land from the same white family that used to own his and Berniece’s ancestors. To him, that’s sweet, simple justice. Berniece doesn’t play the marked instrument anymore, is clearly even a little afraid of it. But she refuses to let the piano go because of its illustrated, intimate family history. Participants in the feud include the siblings’ uncles, Doaker (Lloyd Barnes, Jr.), a longwinded railroad worker, and Wining Boy (F. Carl Brown), a womanizing, card-playing gadabout. The pious, starchy minister, Avery (Laurence Pete), is Berniece’s suitor; their marriage would lend his storefront church some needed respectability. Barnes, Brown, and Pete superbly explore the minute but telling details of their roles.

Anyone who directs The Piano Lesson must balance a wealth of subplots and motifs or choose to emphasize some over others. There are myriad romantic and just plain lustful entanglements through which to view the characters’ behavior. The cultural collision of Southern blacks who’ve moved to live alongside Northern blacks is always present. The Byzantine interconnectedness of bloodlines among the characters reveals constant, surprising associations.

While he neglects nothing, director Smith has followed the most audience-pleasing route, gloriously pleading the case that The Piano Lesson is an epic ghost story. The show is full of grotesquely described specters who watch, warn (a blue-suited Anglo wraith who must hold his own head steady atop a broken neck), and sometimes kill, as in a spree of “accidental” drownings of white Southern landowners connected to Berniece and Boy Willie’s family. Light designer Nikki DeShea Smith and technical director Michael Pettigrew work small but potent wonders with flickering wall patterns and billowing curtains.

Wilson’s script contains enough monologues, backstories, and flights of fancy to fill another potent, stand-alone one-act. At almost three hours including intermission, The Piano Lesson could stand some judicious pruning. Still, the fact that the Jubilee artists kept a sold-out house responsive and barely restless for all that time, then brought them to their feet for a wild standing ovation, testifies to the enchanting powers of Smith and his cast. This Piano Lesson reminds us that an old-fashioned, richly drawn ghost story can be literary and spellbinding at the same time.